Brother-in-law of Gen Rawat, Yash Vardhan Singh wrote on his social media about the incident and sought justice into the matter.
Staff Reporter

Shahdol (Madhya Pradesh): Brother-in-law of former CDS late General Bipin Rawat, Yash Vardhan Singh has claimed that the administration has illegally acquired his land for the construction of National Highway. They have also destroyed their properties including the mausoleum of his father (Gen Rawat’s father-in-law), he claimed.

Yash Vardhan Singh has written the issue on his social media and sought justice into the matter.

“On the day when the last rites of Jija ji General Bipin Rawat and Jiji Madhulika Rawat were being performed. The administration took advantage of the occasion. According to the orders of the Government of India, a National Highway is being constructed by cutting trees and illegally destroying mausoleums on the premises of our personal residence in Shahdol, MP. Along with this, an order has also been issued to the local police to register a case against us on any of our interference. Justice needed,” Singh wrote on his Facebook wall. 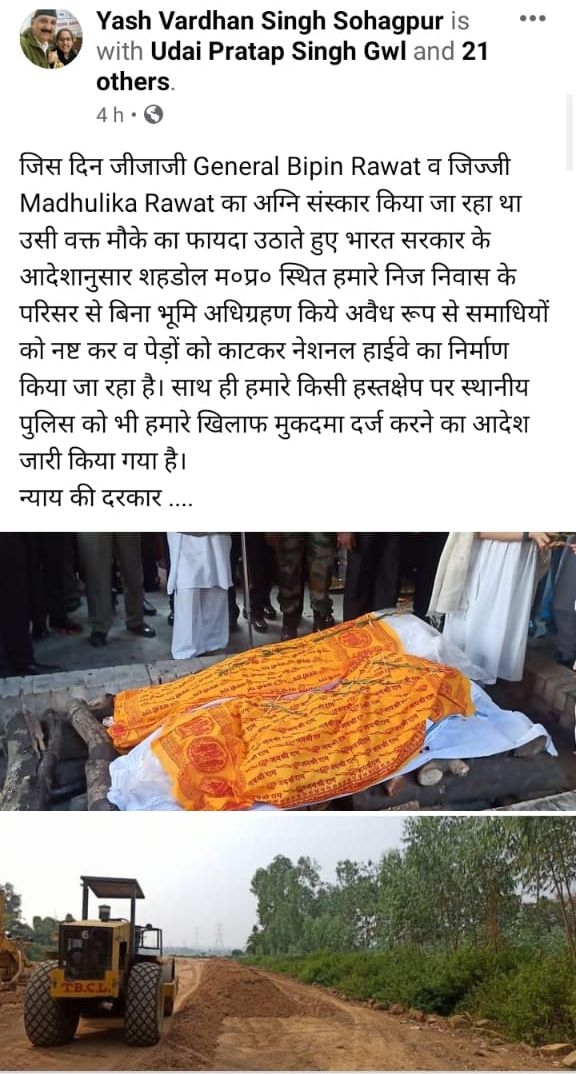 Singh told the free press that on December 10, he was going to Delhi to attain the last rites of Gen Rawat and Madhulika. Meanwhile , a contractor Amit Dixit had called him and said that he had received an order to acquire his other parts of land in addition to his previously acquired land for the construction of NH 43, Singh added.

When Singh expressed his protest then contractor Dixit further told him that Suhagpur police station in charge had also been directed to take him into custody if he opposed the action.

Earlier, about one acre of land was acquired which was in the name of his father and his wife Sapna. He had received the compensation amount for that land. But when the construction work started the administration acquired about half an acre of land registered in the name of his wife without any notice and began the construction work, Singh added.

Singh further said that the mausoleum of his late father (father-in-law of General Bipin Rawat) and his two grandmothers were constructed at the portion of land which had been acquired and they were also destroyed.

Singh has said that he had no problems in contributing to nation building. But this initiative of the administration would not be acceptable. The legal procedure should be followed in the matter. He had no objection but the initiative was taken without any notice, Singh added.

Singh further pleaded for justice in the matter.