Madhya Pradesh: 1.5 bigha land of stadium taken away, hockey players demand it back

The stadium has been hosting several state and national hockey tournaments for years. The municipality organises Lal Bahadur Shastri Memorial Golden Cup every year where players from across India gather to compete.
ANKITA ANAND 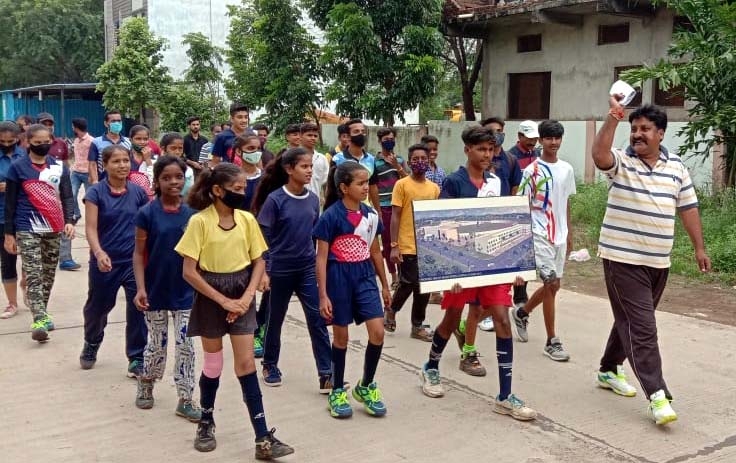 Bhopal (Madhya Pradesh): Hockey players in Guna took to streets on Monday and reached the collector’s office, protesting against the administration for giving away 1.5 bigha land of Sanjay hockey stadium of PG College despite an impending extension project.

“The Sanjay stadium that is situated in Guna PG College is to be extended and the procedure has begun. The astro-turf is to be laid in the stadium and a building is to be constructed. Former collector S Viswanathan had allotted the parking area of the stadium to Chamber of Commerce to hoist National Flag, last year in June. As the extension and construction of full-fledged stadium finishes, there will arise a need for parking space, which the district administration has given to Chamber of Commerce without taking permission from the school education department,” said Shekhar Vashisth, a former hockey player who led the protest.

The stadium has been hosting several state and national hockey tournaments for years. The municipality organises Lal Bahadur Shastri Memorial Golden Cup every year where players from across India gather to compete.

Vashishth said, “The street vendors and small shop owners had encroached upon the parking area earlier. After several complaints, the then-collector allotted the plot to the Chamber of Commerce, who promised to hoist a 102-feet high national flag. Despite the stadium being a part of PG College, the district administration gave away the plot to the organisation. The stadium is now being reconstructed as per international standards and 1.5 bigha is a lot of land, giving away for nothing.”

“We have urged the Governor to look into our matter as we have failed trying to make the district administration listen to us. We are cast off whenever we try to go there and play. Everyone is proud of national team’s achievement at Olympics but nobody cares about the condition of players and the game at local level.”

“The Chamber of Commerce had promsied to hoist and maintain the national flag, but they failed. We have spotted the torn flag at least thrice. A few days ago, when they put up a flag and we found it torn again, we complained to district magistrate, after which they had to put it down. Hoisting a torn national flag is a crime under The Flag Code of India. We urge the Governor and administration to take away the flag hoisting rights from the Chamber and register FIRs against them and simultaneously provide the stadium plot back to the school and players.”