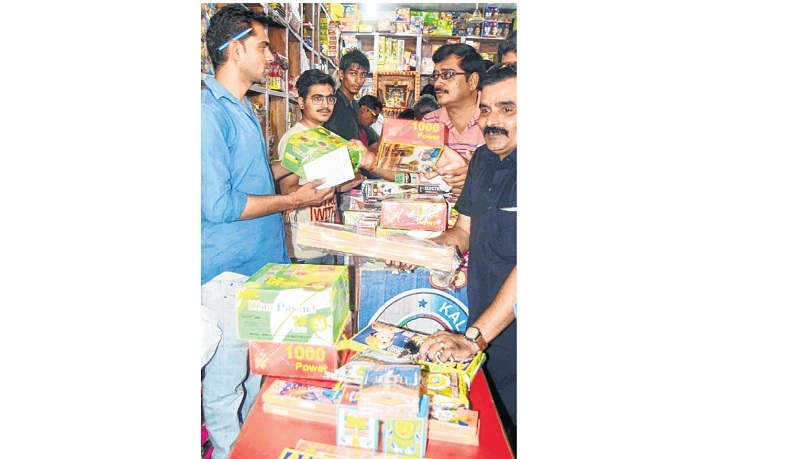 BHOPAL: Traders here have heaved a sigh of relief as Supreme Court modified its order on ‘Green crackers’ on Wednesday. The apex court observed that its direction on ‘Green crackers’ is meant for Delhi-NCR region and not pan-India. It clarified that firecrackers other than green crackers will not be sold in the Delhi-NCR region this festival season. Firecrackers already manufactured can be sold in this festival only in other parts of the country only this year.

The decision has cheered the people as well, as they were looking forward to celebrate the festival of lights bursting traditional crackers. They alike the firecracker sellers were not clear about the concept of the ‘Green Cracker’. Meanwhile, Bhopal collector Sudam Khade in a meeting on Wednesday directed the sellers to ensure the sale of only those crackers that don’t lead to noise pollution. The restriction of Supreme Court had put the traders in dilemma as they had already stocked the firecrackers, which as per the specification were not all ‘green crackers’.

The Wednesday’s decision of the court has brought the smile back on their traders’ faces. The sale of these crackers will be allowed this year only and from next year the sellers will have to switch over to Green crackers. They would not be banned from selling their unsold stock next year. Dharmendra Sabnani, a firecracker seller in Bairagarh said that there were 15 big shops in the market and almost all have procured crackers from Sivakasi where the manufacturers follow the environment norms. The teams of explosive department accompanied with the teams of pollution control board come to us every season and take samples from the market and since the crackers here are of good quality, there is no reason to worry, said Sabnani.

He was however skeptical about the concept of ‘Green crackers’. He said that crackers were already in the market and now since the ban is applicable in only Delhi NCR, there is no cause to worry.We will abide by all rules, he added. Daulatram Sabnani, owner of Bhawani Patakha shop and also the vice chairman of Thok Atsishbaazi Vikreta Sangh though doesn’t have exact idea of the ‘Green cracker’, however maintains that the crackers if it creates sound less than 125 decibels within a range of four meters is termed green.

The crackers which we are having also do not create smoke or noise and would not harm the environment as they were manufactured as per the norms, he claimed. Regional officer of the Madhya Pradesh pollution control board Pushpendra Singh Bundela said that the board has already fanned teams which are seizing samples of crackers in the market. If we find anyone selling crackers having intensity beyond permissible limits, action will be taken, he added.