Bypolls in Madhya Pradesh: Tug- of- war intensifies in BJP over candidate selection 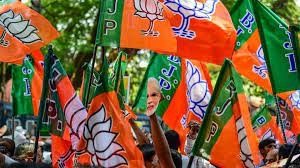 BHOPAL: Tug of war within the BJP over candidate selection for Khandwa parliamentary seat by-poll intensified on Friday with leaders of two factions reaching state BJP headquarters here to meet the party leaders to stake their claims on the party ticket.

By-polls to 3 state legislative assembly constituencies – Prithvipur, Raigaon and Jobat and Khandwa parliamentary constituency are slated to be held on October 30. Counting of votes will take place on November 2.

However, Archna Chitnis was elected to the state assembly in 2013 for a third time. She lost the assembly election in 2018 to independent candidate Surendra Singh Shera.

On Friday, both the leaders with their followers were at the state BJP office to meet the state BJP president VD Sharma and other leaders to stake their claims on the party ticket even as just one week time is left for the last date for filing the nomination papers.

A senior party leader said, “Archna Chitnis’ candidature can’t be overlooked in case the party doesn’t go for considering any sympathy factor in favour of Harshvardhan. Given the party’s defeat in Damoh assembly constituency by-poll the party will not like to take any risk just to favour any person for candidature. “

On her part, Archna Chitnis said, “It’s the party leadership which decides on the candidature.”

Meanwhile, a meeting of the BJP leaders was convened at the CM House in respect with by-polls. Chief minister Shivraj Singh Chouhan was present.

After the meeting VD Sharma said, “This is our routine meeting. This is not to discuss the names of candidates. It’s party high command which takes its decision on the candidates. Whoever is fielded as a candidate the party will work wholeheartedly for his victory.”