Bhopal: Tigress run over by train in Budhni forests 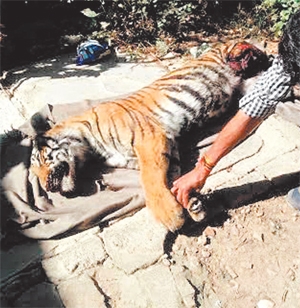 BHOPAL/HOSHANGABAD: A three-year old tigress was mowed down by the Jabalpur-Bhopal Intercity Express near Budhni in Sehore district late on Wednesday night.

As per reports, the incident took place between 10:30 pm and 11:00 pm on Wednesday at Midghat Section between Budhni and Obaidullganj railway stations. The left hind leg of the feline was severed. A forest department team brought the injured tigress to Forest Chowki, Banskhapa Forest area. Dr Amol performed the postmortem behind the forest chowky.

This is the second incident of a tiger being hit by train in the state this month. Earlier, on December 6, a tiger was killed on being hit by a speeding train near Majhgavan Railway Station in Satna district. This is the fourth death of a wild animal in a train accident.

SDOP UN Singh said, “The tigress was probably crossing the railway line when the accident occurred. A forest team had rushed to the site and everything possible was done to save her”.

SDO (Forests) BP Singh told Free Press that the viscera of the tigress has been preserved and would be sent for testing.