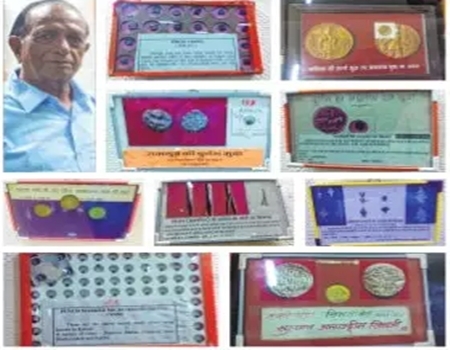 Bhopal: Coins speak volumes about history of any country and if you want look into the glorious past of India through rare and priceless coins you are invited to State Museum in Bhopal where 2,000 coins belonging to ancient and modern India are on display.

The coins that ferret out the 2600-year-old history of the country that saw the punch-marked coins which were in vogue in 16 Mahajanapadas (small states) belong to the private collection of 76-year-old R C Thakur who runs Ashwini Shodh Sansthan in Mahidpur, Ujjain.

A 12g gold coin of Alauddin Khilji and 4g gold coin of Rs 5 of East India Company are also on display here. Besides, more than 1500 silver coins including ‘Punch Marked Micro Round silver’ are also exhibited here. A variety of Kakani coins –Damroo, Makar, Elephant, Bull, Bindu maker and Rabbit have grabbed the attention of people.

The exhibition is divided into various sections including ‘Punchmark Coins’, ‘Mughal Era Coins’, and ‘Maurya Era Coins’, ‘Vikaramaditya Era Coins’, Coins of Indian states and other countries, Naga coins’, ‘Takshashila-Gandhar Coins’ and Modern Era Coins.
Under these sections, some rare collections including Ramgupta currency, coin of Buddha in meditation, coin of Dharm Chakra (300 BC), coin of Bodhi tree (300 BC), Kaushambi coin, currency of Sher Shah Suri, largest punch coin from Vidisha, Tokan of Akhand Bharat (1947), American currency, portrait currency of Mahatma Gandhi, Pt. Jawaharlal Nehru and Alexander the Great have put on display. While some coins are in shapes of fish, frog and hairpin, there are others giving the message of to conserve water and as environment.

Speaking to Free Press about his passion, Thakur, who hail from Ujjain, said that he was 12 when while visiting an exhibition organised by RBI in Ujjain he got fascinated to coins. “Coins inspired me a lot and since then I have been collection coins,” he added.

Speaking about his prices possession Thakur said, “It is our family collection and we have collected all these coins from the rivers of Ujjain mainly from Shipra. Earlier our grand father and father used to collect the coin, and now my children and I am continuing the tradition. I have been collecting coins for 60 years and now, we have lakhs of coins in our collection including terracotta coins”

Thakur, who has been running Ashwini Shodh Sansthan in Mahidpur for past four year informed, “We have also donated some coins to government. We have displayed coins in many exhibitions in the state as well as in Chhatisgarh and have received good responses from visitors including children and youth.”

“This is our second exhibition is Bhopal. In 2002, we exhibited our work at the State Museum here. Research scholars from India as well as from countries like Australia, America, Japan and France have done Ph.D under our Sanstha. I am now writing on a book on ‘Vikramaditya’,” Thakur stated.

On being asked about security of coins, he said, “We do it ourselves. There is no involvement of government in it. We keep some gold and silver coins in bank locker.”