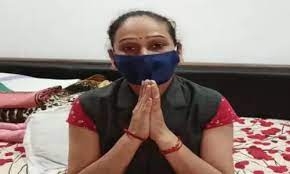 BHOPAL: BSP MLA from Patharia Rambai Parihar stoked a controversy on Monday by allegedly advocating 'reasonable corruption' as per a video that went viral on social media. The MLA who visited a village is reportedly seen saying "nothing wrong if Rs 500-1000 is taken." However, she asked the panchayat secretary and rozgar sahayak concerned to return money to villagers taken as a bribe.

As per MLA's camp members, recently a group of people from Sataua village met Rambai and complained that rozgar sahayak and panchayat secretary had demanded a bribe of Rs 10,000 each to approve construction of their houses under PMAY. The two personnel allegedly took bribe from other villagers too. During her visit, the MLA called both the panchayat officials and in front of the villagers she asked them to control their greed and serve the people. "See it's not right to take Rs 10,000 to release the amount. It's okay if Rs 500 to Rs 1000 is taken. These people are poor and they are constructing their houses with cost of about Rs 1.25 Lakh. With this amount you construct your bathroom only", she is heard saying.

She also warned the personnel that if they took any coercive action against the villagers for their complaints then she would take strict action against them. Despite efforts, the BSP MLA couldn't be reached for her comments. However, the leader of the BSP legislature party in the state legislative assembly Sanjeev Kushwah said, "I don't agree with my fellow MLA. Corruption is corruption. In any degree and form it's intolerable and strong action should be taken against the corrupt."