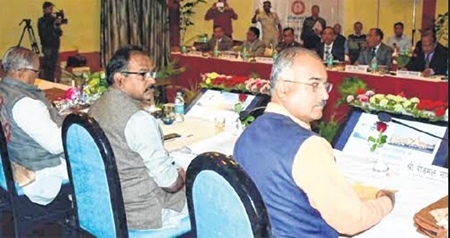 Bhopal: In a meeting with railway officials on Tuesday, members of Parliament representing different regions raised various demands including upgradation of stations, better facilities and safety measures. The Public representatives also sought for extension and new stoppages of trains.

Speaking with the railway officials, Bhopal MP Alok Sanjar demanded upgradaion of Bairagarh Railway station which has been recently included in Bhopal division. He also asked for proper upgradation and development of Nishatpura Railway station and also sought extension of Kamayani Express up to Chhapra. Booths in waiting rooms under Amrut Yojana at Bhopal and Habibganj railway stations were among the demands the MP had raised before the authorities.

MP Rodmal Nagar, representing Rajgarh constituency demanded double lines between Guna and Maxi Railway stations. Proper parking and installation of CCTV cameras should be made at the railway station, MP told the officials. Sagar MP Laxminarain Yadav demanded increase in frequency of Indore-Rewa train, stoppage of Bhopal Express at Mathura and also extension of Bhopal-Damoh Rajrani Express up to Habibganj Railway station. He also demanded to speed up over bridge construction on Vidisha Road and proper use of Railway abandon land in Bina.

DRM Sobhan Chaudhary said that trained doctors and 108 ambulance service will be made available for free at Bhopal Railway station round the clock. Under the Digital India Mission, a card-launch kiosk has been installed by SBI and RRCTC for cashless transaction at Bhopal Railway station. Lifts and escalators will be installed at Bhopal, Itarsi and Bina stationa, said Chaudhary.