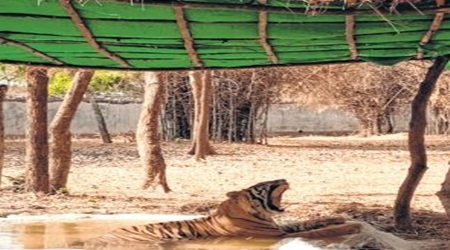 To beat the summer heat, the authorities have made elaborate arrangements to maintain the temperature and effected significant changes in the menu of animals and birds. The national park administration has arranged for water holes inside the animal enclosures and also placed khus curtains around to keep the heat at bay.

Water sprinklers, have been installed for the free animals. Artificial water ponds have been made for the migratory birds as they survive on algae layered water. However, there are only 18 water holes for the un-caged animals at the National park, spread in an area of over 445 hectare. Van Vihar Director Samita Rajora claiming that animals at the national park remain healthy even in summers, said that the administration has made elaborate arrangements to beat the scorching heat.

“Herbivores animals take rest under trees and bushes but not carnivore and so water holes have been dug and are filled at regular intervals during the day. Besides, diet of animals has also been designed as per the recommendation of veterinary doctors,” said Rajora. She further informed that power supply at the national park is also through solar panels and this ensures undisrupted water supply even during power outage. For free animals, the green fodder along with supplements are grown here itself and they are dropped at 9-10 points twice a day. We have placed khus curtains over the animal shed to maintain the temperature, she added.