HomeBhopalBhopal: If not from family, its courtier will be elevated to Congress president’s post, says BJP president VD Sharma

Bhopal: If not from family, its courtier will be elevated to Congress president’s post, says BJP president VD Sharma

He further said, “Congress has been reduced to one family. When there is no organisation, party will fall short of names for the president’s post."

Bhopal (Madhya Pradesh): Taking a dig at Congress in the backdrop of the race for party president, the BJP state president VD Sharma said if not from ‘family’, any courtier of the family to be elevated for president’s post in Congress.

VD Sharma was replying to a volley of questions from media persons regarding the controversy surrounding the national president of Congress and the discussion of Digvijaya Singh becoming the president.

VD further said, “Congress has been reduced to one family. When there is no organisation, party will fall short of names for the president’s post. One family has been making everything so far. Now voice has started raising inside the country that the Congress is losing its existence, it has been confined to the family, now the family has started feeling it too.”

“Now if not from the family, the courtier of that family will be elevated for the president’s post and the courtier will support anti-national and anti-culture elements in the country,” VD added.

Congress presidential poll continued on Wednesday with news that Digvijaya Singh would be arriving in New Delhi amid buzz that he would file his papers for the top post.

Singh, currently part of the Bharat Jodo Yatra, had said a week back that he was not ruling himself out of the party chief's post but later publicly stated that he was not interested.

With the rapid turn of events and the previous consensus face - Rajasthan Chief Minister Ashok Gehlot - looking reluctant to leave the state for the Centre, the Congress appears to be gearing up for plan B.

Sources said, Digvijaya Singh could have been signalled by party president Sonia Gandhi to file his nomination to avoid the current embarrassment where no official face has emerged even with just two more days left to file papers. 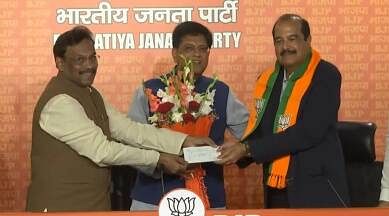