The sit-in ended only after Digvijaya Singh received assurance from principal secretary to CM that appointment has been fixed for January 23 at 12 noon. State Congress president Kamal Nath also reached venue to expressed solidarity with dam-affected people not getting proper compensation.

However, what struck most was a video clip that went viral in social media amid Digvijaya Singhís dharna. The clip showed Chouhan and Nath talking to each other at the state hangar where they had a chance meeting.

Digvijaya Singh had been seeking appointment from chief minister to apprise him of plight of over 1500 families who are to be shifted from the project site. Chouhan had first given appointment to Singh for January 21 at 11 am but cancelled it at the last hour.

Singh said that he staged dharna at CM house as chief minister did not have time for a former CM and Rajya Sabha member who wants to apprise latter about the plight of 1,500 families of dam-affected people.

Heavy police arrangements were made outside official residence of Digvijaya Singh from morning and the roads were barricaded restricting movement of people. Nevertheless, Digvijaya Singh started his march towards CM house along with his supporters and sat near Doordarshan Kendra after police stopped him there.

In the meanwhile, officials from the CM house said that Chouhan will meet Singh on January 23 at 12 noon but he refused to budge demanding it in writing.

However, Singh kept sitting on dharna at Doordarshan Kendra for more than an hour after which PS to CM Manish Rastogi had a word with Singh. Later, Digvijaya Singh said that if CM cancels the appointment again, then Congress will not allow the movement of machines meant for dam project in the state.

Kamal Nath, who was in Chhindwara, returned to Bhopal on Friday morning. He bumped into CM Shivraj Singh Chouhan at the state hangar as Chouhan was about to leave for Dewas.

After this, Nath reached the dharna venue. Nath talked to the farmers and Singh and said that Congress party was with the dam affected people. Replying to question, Nath said that his meeting with CM at the state hangar was a coincidence.

Tame and Suthalia irrigation project covers bordering villages of Rajgarh, Bhopal and Vidisha districts. More than 1500 families will be affected. Government has offered them compensation according to collector guidelines, which the farmers say is very less as their fertile lands are being submerged.

State PCC Chief Kamal Nath lambasted media persons when he was asked that CM Chouhan met him (Nath) but didnít give time to Digvijaya Singh.

When the media persons asked Nath that chief minister did not give time to Digvijaya Singh, the PCC chief got irked and replied that it was not a scheduled meeting. It was a coincidence that they met at the state hanger. Nath said that his helicopter landed at the Airport while CM Chouhan was leaving. It was just a courtesy meet.

Nath further said that chief minster told him that Digvijaya was sitting on a dharna, he did not mind giving them time. On which Nath responded to Chouhan that he would talk to Digvijaya Singh in this regard.

Later, Nath reached the Dharna venue and met Digvijaya. Nath said that the whole Congress party was with the dam-affected people. 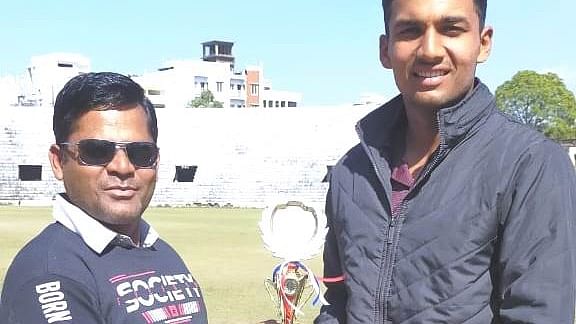 Bhopal: Ranveer's ton gets Jehangirabad XI in semis, to play against Malviya Club