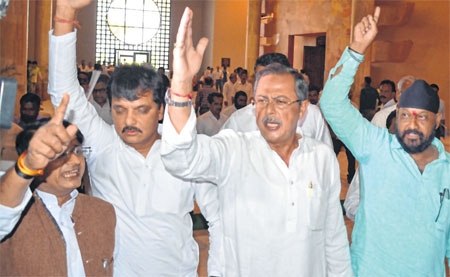 BHOPAL: The Congress staged a walkout from Vidhan Sabha on Friday in protest against rampant illegal mining in the state. Congress MLA Govind Singh had raised the issue through a call-attention motion.

Singh said in his area, officers of the mining, police and revenue departments were in cahoots with illegal miners. Sand extracted from Lahar (Bhind) was being transported to Kanpur for sale. He claimed he was in possession of a CD showing illegal mining and a damning audio of the mining officer. Mahendra Singh Kalukheda said in Ashoknagar, a ruling party leader was the kingpin of the gang of illegal miners. He said no action was taken against him even though a warrant was pending against him.

KP Singh said the flow of a river had been diverted to extract sand. Ajay Singh said illegal mining was going on all over the state and the government was patronising it. He also said the party would move court against it. Parliamentary affairs minister Narottam Mishra, who was holding the fort on behalf of mining minister Rajendra Shukla said the allegations would be probed. However, the opposition was not satisfied.