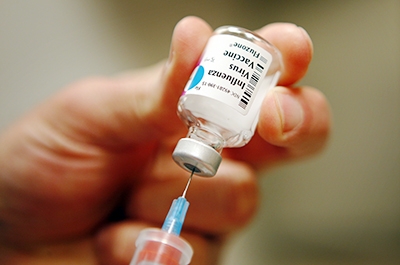 A three and half month old child died after being vaccinated on Friday night. The child Navneet Ahirwar was administered the vaccine at an anganwadi centre in Gandhi Nagar on the day. According to Gandhi Nagar SI Shivhawan Tiwari the child identified as Tarun Ahirwar, son of Nandkishore Ahirwar who lives in Arjun ward in Gandhi Nagar area and works in MPEB. He has another son elder to the deceased Tarun. He said he was not at home and wife Kavita Ahirwar and mother Krishna Ahirwar took the three months and fifteen days old child to the centre.

However, after they returned the child started crying due to uneasiness. He was taken to Hamidia hospital from where he was referred to Kamla Nehru hospital. The child died at around 12 in the night, said Tiwari. The family is yet to provide detailsl of the vaccines which were administered to the child. Tiwari said the child’s body was sent for postmortem and an FIR has been registered in the matter. He said the investigation will be done to ascertain the cause of child’s death.