Government’s helicopter Bell 430 met with an accident in 2003 and its manufacturing company had stopped its production.

Bhopal (Madhya Pradesh): The state cabinet on Tuesday approved to sell off non-operational Helicopter Bell 430. Through the medium of e-tender, the institution has offered to sell it for Rs 2.57 crore.

Government’s helicopter Bell 430 met with an accident in 2003 and its manufacturing company had stopped its production. As it was not in condition to fly, government floated an e-tender to sell it, State Medical Education Minister Vishvas Sarang told media after cabinet meeting at Mantralaya.

The government purchased the Bell 430 chopper in 1998. State government has been trying to look out for buyers for the last ten years. Even after seven attempts, the government failed to search for the buyer. It was some time back that FA Enterprises, belonging to aviation scrap dealer Naim Raza, won the bid, with an offset price of Rs 2.24 crore. Government said the buyer offered more than the offset price.

On February 21, 2002, the chopper met with an accident while carrying the then state Congress president Radhakishan Malviya, Bollywood singer Anuradha Paudwal and personal assistant to then Chief Minister Digvijaya Singh, Rajendra Singh Raghuvanshi. It was carrying them from Indore to Beora.

During crash landing, Rajendra Singh Raghuvanshi and Anuradha Paudwal sustained injuries. As the government had not insured the chopper, it could not claim insurance. Later, the damaged chopper was repaired and put on sale in 2012. Its manufacturer Rolls Royce had also stopped producing its parts. Two entities made a bid to purchase the non-operational chopper and FA Enterprises won it. 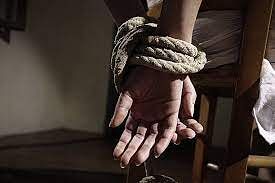