Lviv and the rest of western Ukraine have been less affected by the fighting than other parts of the country, and the city was considered to be a relatively safe haven.

Russian missiles hit the western Ukrainian city of Lviv on Monday, killing at least seven people, Ukrainian officials said, as Moscow's troops stepped up strikes on infrastructure in preparation for an all-out assault on the east. Plumes of thick, black smoke rose over the city after a series of explosions shattered windows and started fires. Lviv and the rest of western Ukraine have seen only sporadic strikes during almost two months of war and have become a relative safe haven for people from parts of the country where fighting has been more intense.

Ukrainian Prime Minister Denys Shmyhal, meanwhile, vowed to “fight absolutely to the end” in strategically vital Mariupol, where the last known pocket of resistance in a seven-week siege was holed up in a sprawling steel plant laced with tunnels. Russia has repeatedly urged forces there to lay down their arms, but those remaining ignored a surrender-or-die ultimatum on Sunday.

Lviv Mayor Andriy Sadovyi said seven people were killed and 12 wounded in overnight missile strikes. Lviv's regional governor, Maksym Kozytskyy, said the Russian strikes hit three military infrastructure facilities and a tire shop. He said the wounded included a child, and emergency teams were battling fires caused by the strikes. A hotel sheltering Ukrainians who had fled fighting farther east was among the buildings badly damaged in the attack, the mayor said.

“The nightmare of war has caught up with us even in Lviv,” said Lyudmila Turchak, 47, who fled with two children from the eastern city Kharkiv. “There is no longer anywhere in Ukraine where we can feel safe.” A powerful explosion also rocked Vasylkiv, a town south of the capital of Kyiv that is home to a military airbase, according to residents. Video posted on social media sites showed smoke in the area after the blast. It was not immediately clear what was hit, and there was no official confirmation from authorities. 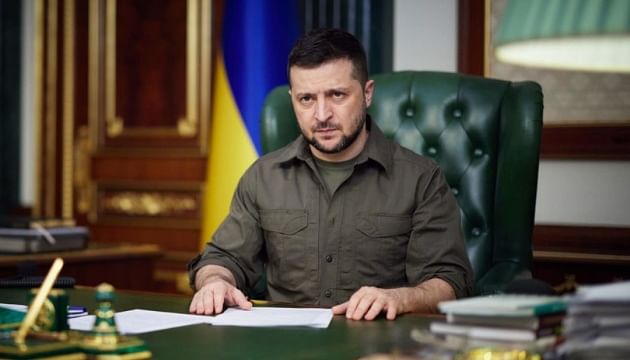