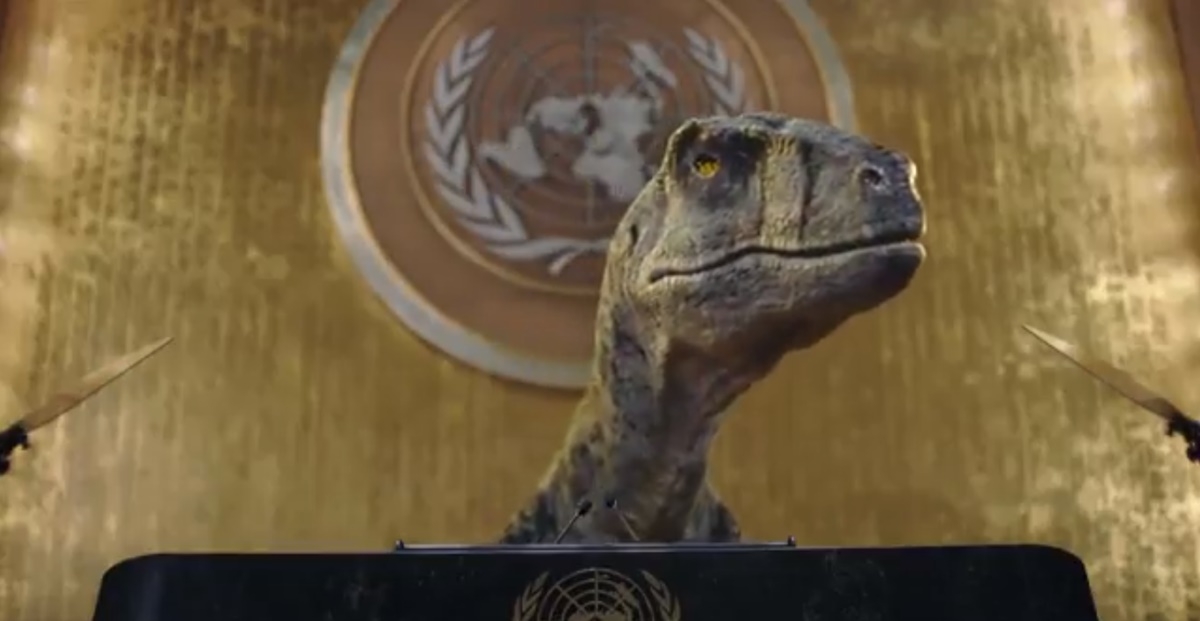 United Nations: An extremely unusual and rare visitor made an appearance in the UN General Assembly, exhorting world leaders and diplomats from the hall's iconic podium not to choose extinction and to save the human species "before it's too late." As diplomats are seated in the 193-member General Assembly, a dinosaur enters the cavernous hall, eliciting fear, gasps and shock from the delegates.

Walking to the iconic UNGA podium, the dinosaur then addresses the delegates from the lectern, "Listen up people. I know a thing or two about extinction. And let me tell you, and you'd kind of think this would be obvious, Going extinct is a bad thing. And driving yourselves extinct? In 70 million years, that's the most ridiculous thing I've ever heard!" "At least we had an asteroid. What's your excuse? You're headed for a climate disaster. And yet every year governments spend hundreds of billions of public funds on fossil fuel subsidies," the dinosaur says in a video released on Wednesday.

"Imagine if we had spent hundreds of billions per year subsidising giant meteorites. That's what you're doing right now," the now-extinct carnivore says.

It then tells the General Assembly that that amount of money could be spent to help people around the world living in poverty.

"Don't you think helping them would make more sense than, I don't know, paying for the demise of your entire species? Let me be real for a second. You've got a huge opportunity right now, as you rebuild your economies and bounce back from this pandemic.

"This is humanity's big chance. So here's my wild idea: Don't choose extinction. Save your species before it's too late. It's time for you humans to stop making excuses and start making changes," the dinosaur says, getting a standing ovation from the diplomats and delegates in the UNGA hall.

The special campaign featuring the ferocious, talking dinosaur has been developed by the United Nations Development Programme (UNDP) to urge more climate action from global leaders. The short film was launched as the centrepiece of the UN agency's new 'Don't Choose Extinction' campaign.

UNDP said this is the first-ever film to be made inside the UN General Assembly using computer-generated imagery (CGI) features global celebrities voicing the dinosaur in numerous languages, including actors Eiza González (Spanish), Nikolaj Coster-Waldau (Danish), and Aïssa Maïga (French).

As global leaders head to Glasgow for the crucial UN Conference on Climate Change, COP26, UNDP's 'Don't Choose Extinction' campaign and film aim to shine a spotlight on fossil fuel subsidies and how they are cancelling out significant progress towards ending climate change and are driving inequality by benefiting the rich.

UNDP research released as part of the campaign shows that the world spends an astounding USD 423 billion annually to subsidise fossil fuels for consumers - oil, the electricity that is generated by the burning of other fossil fuels, gas, and coal. This could cover the cost of COVID-19 vaccinations for every person in the world, or pay for three times the annual amount needed to eradicate global extreme poverty.