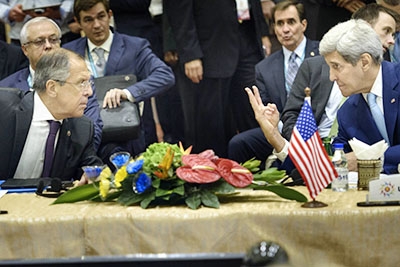 While Russia and the United States have failed to agree on a way to end the Syrian conflict, they did agree on eliminating its declared chemical weapons stockpile

Kuala Lumpur : US Secretary of State John Kerry says he hopes an agreement reached with Russia to investigate chemical weapons attacks in Syria will hold the perpetrators accountable, reports AP.

Speaking in Malaysia, Kerry said he and Russian Foreign Minister Sergey Lavrov had agreed Wednesday to language of a new UN Security Council resolution that would create an investigative mechanism to determine who is responsible for chemical attacks.

The current process does not allow investigators to make a finding of accountability.

Kerry said the resolution “will create a process of accountability which has been missing.” “What we are trying to do is to get beyond the mere finding of the fact that it may have been used and actually find out who used it and designate accountability for its use,” he added.

While Russia and the United States have failed to agree on a way to end the Syrian conflict, they did agree on eliminating its declared chemical weapons stockpile. The US has been pressing the Security Council to ensure accountability for an increasing number of alleged chlorine attacks.

Following a chemical weapon attack on a Damascus suburb that killed hundreds of civilians on Aug 21, 2013 a US-Russian agreement led to a Security Council resolution the following month ordering the destruction of Syria’s chemical weapons, precursors, and the equipment to produce the deadly agents.

Secretary of State John Kerry said the US atomic bombing of Hiroshima underscored the importance of the Iran nuclear deal and disarmament in general, as Japan marked the attack’s 70th anniversary.

“Needless to say, it’s a very, very powerful reminder of not just the impact of war in a lasting way on people, on countries, but it also underscores the importance of the agreement we reached with Iran to reduce the possibility of more nuclear weapons,” Kerry said on the sidelines of a regional diplomatic gathering in Kuala Lumpur.             t – to reduce the number of existing nuclear weapons.”