The Black Sea port is mining its beaches and rushing to defend itself from a Mariupol-style fate. Some Western officials believe the city, which is dear to Ukrainians' hearts, could be next

Anti- tank barricades are placed on a street as preparation for a possible Russian offensive, in Odesa, Ukraine, on March 24, 2022 | AP

Odesa (Ukraine): The Black Sea port of Odessa is mining its beaches and rushing to defend its cultural heritage from a feared Mariupol-style fate in the face of growing alarm that the strategic city might be next as Russia attempts to strip Ukraine of its coastline.

The multi-cultural jewel, dear to Ukrainian hearts and even Russian ones, would be a hugely strategic win for Russia. It is the country’s largest port, crucial to grain and other exports, and headquarters for the Ukrainian navy.

Bombardment from the sea last weekend further raised worries that the city is in Russia’s sights.

Residents say Russian President Vladimir Putin would be insane to take Odessa with the brutal approach that has left other Ukrainian cities in ruins. Once a gilded powerhouse of the Russian empire, Odessa includes one of the finest opera houses in Europe and the famed Potemkin Steps between the city and the sea, featured in Soviet filmmaker Sergei Eisenstein’s 1925 silent film masterpiece “Battleship Potemkin.”

But after a month of grueling war, people say they can’t predict anything anymore.

“The only thing we’re really afraid of is that the other side has no principles whatsoever,” said Valerii Novak, a local businessman. He never considered himself a Ukrainian patriot, but when Russia invaded, something “just clicked” in him. He has refused to leave Odessa and joined thousands of people in basic training in how to use a gun.

Now he and other Odessa residents watch Russian warships move closer, in provocation. Western officials call the Russian ships a mix of surface combatants and the kinds used to put naval infantry ashore.

The seizure of Odessa and the strip of land farther west also would allow Moscow to build a land corridor to the separatist Trans-Dniester region of neighboring Moldova that hosts a Russian military base.

A senior U.S. defense official said this past week the U.S. didn’t see indications that ships in the Black Sea were firing on Odessa as they had last weekend. He spoke on condition of anonymity to discuss the sensitive subject.

“It’s difficult to know what this indicates,” Pentagon press secretary John Kirby said of last weekend’s bombardment. “Is it the prelude to an assault on Odessa? Is it a diversionary tactic to sort of hold and fix Ukrainian troops in the south so that they can’t come to the relief of their comrades in Mariupol or in Kyiv?”

The uncertainty adds to the anxiety in Odessa, where the initial panic has been followed by a wary calm.

Some residents are pitching in to strengthen the city’s defenses. On an unmined beach, sea captain Sivak Vitaliy joined others in packing sandbags for barricades.

“We will win,” he said, no matter how ghastly Russia’s invasion has become in cities like Maruipol or Kharkiv.

Ukrainian authorities assert that Russia appears to lack forces to quickly press an offensive on Odessa as its marine units are busy to the east with the siege of Mariupol, where they have suffered heavy losses.

Closer to Odessa, on the Black Sea coast, the Russian troops have taken Kherson and tried to bypass Mykolaiv, an important port halfway between Odessa and Russia-annexed Crimea, but fierce Ukrainian resistance has thwarted those attempts.

“Is our city the next one or not?” asked Hanna Shelest, an Odessa-based security analyst.

She said Russia needs Odessa to surrender, not to fight, to avoid the “blow to sentiment” that any destruction of the city’s cultural heritage would give to nostalgic Russians. Odessa was one of the largest and most cosmopolitan cities in the Russian empire, with a significant Jewish population as well as Greek, Italian and others drawn by the vibrant port.

Now the city’s Italian baroque opera house, rebuilt in the 1880s, is one of the most heavily defended buildings in Ukraine. Major monuments elsewhere in Odessa are covered in sandbags. The contents of the fine arts museum, including Orthodox religious icons, have been moved into underground storage. Checkpoints are heavy throughout the historic city center.

Russian forces’ plans to take Odessa have been ruined by the Ukrainian resistance in Mykolaiv, a crucial land supply route, Shelest said. Without holding Mykolaiv, a Russian landing operation in Odessa from the sea would be suicidal.

“If the situation continues like this, there’s a chance for a big attack only if Putin becomes completely crazy,” she said. “From all considerations, he should not do it.”

Nevertheless, Shelest, like other Odessa residents, has gathered her documents in case she has to flee.

The mayor has estimated that 10% of the city’s population of about 1 million has gone.

At the central train station, the iconic melody “At the Black Sea” played. The sound of the orchestra summoned up the 1950s Soviet-era as a man placed his hand against the cold window of a moving train in goodbye.

“It has taken a part of my heart from my chest when sending them away,” said another resident who gave just her first name, Ludmila. “I don’t know how it will be, what it will be.”

Russia’s invasion has created a wave of pro-Ukraine sentiment in a city whose population has shown significant pro-Russia feelings in the recent past. Shelest and other residents noted a survey published this month in which more than 90% of Odessa residents said they wanted to remain part of Ukraine.

“Nobody wants to be part of Russia anymore,” said Natalia Vlasenko, a local tour guide. She called any destruction of Odessa “my personal tragedy” and described a life of walking the streets of her great-grandparents and not wanting to leave.

The city might not be Paris or Rome, she said, but for Ukraine “it’s a gem.” 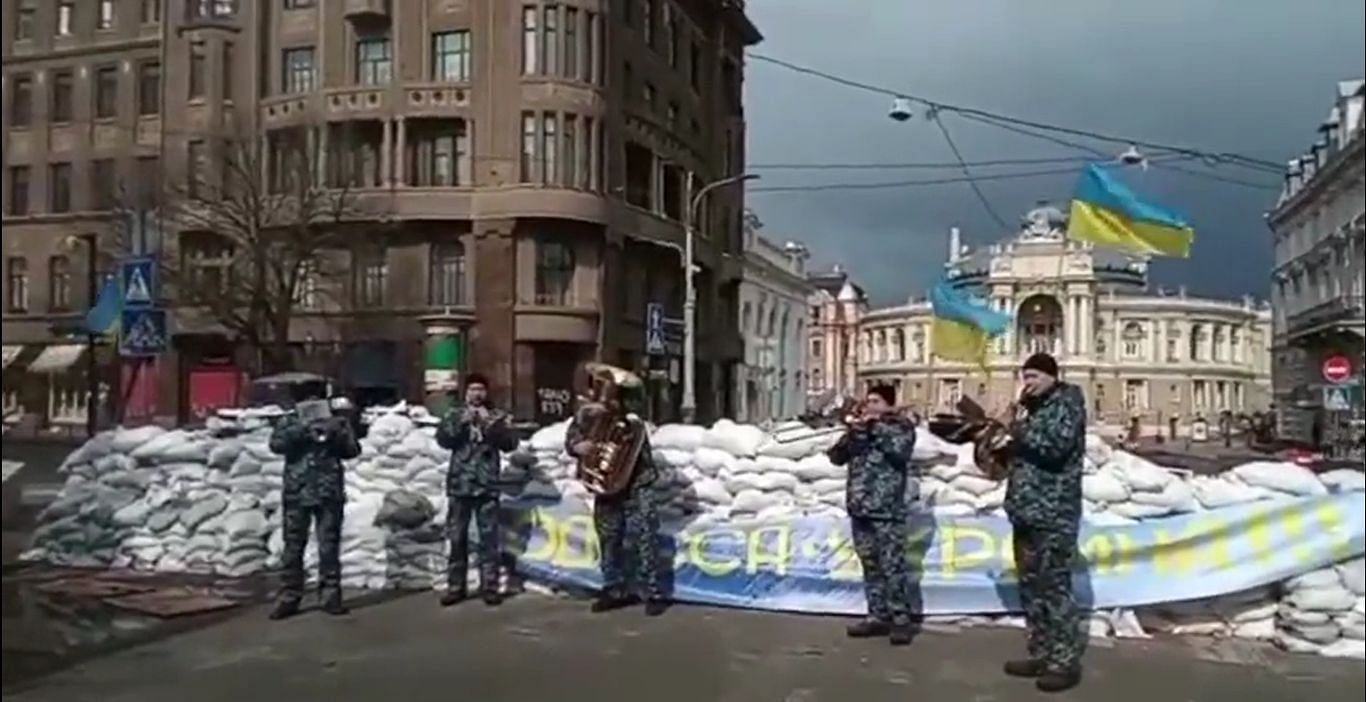