Nigerian students in Ukraine wait at the platform in Lviv railway station, Feb. 27, 2022, in Lviv, west Ukraine. | | Bernat Armangue/AP
Follow us on

With millions of citizens in Ukraine fleeing the country after Russia initiated a deadly attack on February 24, there have been increasing reports of racism against Black people in Ukraine as they try to leave the country.

Black people living in the region say they have been left to languish, with some taking to Twitter in recent days to share accounts of abandonment.

In one such incident, a journalist shared an account of racism faced by his own sister to reach Poland midst sub-zero temperature and bomb fears.

"During her escape she experienced racism, injuries, freezing temps and sleep deprivation. Her story is only one of the hundreds of thousands of people trying to get out," CNN journalist Bijan Hosseini wrote in a Twitter thread posted on Tuesday.

The journalist said his sister is adopted, and from Sierra Leone, and this played a significant role in prolonging her exit.

Hosseini's sister was staying in Kyiv when the war broke out. She tried to leave with her friends but "cars were at a standstill" from the capital to Lviv, a city in west Ukraine close to Poland's border.

"They managed to find a driver who said he could take them to Dnipro (a city in east Ukraine near Russia's border). From there they hoped to get a bus or train to Lviv. The driver charged them $700 for a 7-hour journey," wrote Hosseini, depicting it on a map.

On reaching Lviv, the driver said he would continue and get them to the border. But he apparently changed his mind after 30 hours on the road, and said he had to go back to Kyiv, according to the journalist. "My sister and her friends had to leave the car and attempt to reach the border on foot," he said, sharing a video of the group walking with their bags and belongings.

"After walking 10 hours in freezing temperatures, they decided to leave their belongings behind to lighten the load," wrote the journalist.

"When they arrived to the border they were not let in. Two lines were formed. One for white people, the other for everyone else. Only Ukrainians were being let over the border. Thousands of people were forced to sleep outside in the cold. Fires were started to keep people warm," he said.

"Once the bus finally made it to the border (the same border she was at two days before) someone announced that 'all blacks' needed to get off. My sister and her friends, bravely, refused to get off," he said.

"They were met with the same racist treatment that thousands of others have reported at borders, bus and train stations across the country."

After sitting at the border for five hours, they were finally allowed to cross at the end of a four-and-a-half-day or 108-hour journey.

"My sister is lucky. She's safe, in a hotel where she was finally able to shower and sleep in a bed. There are still thousands of people in her shoes trapped on the other side. More than half a million refugees have fled Ukraine, during the Russian invasion, according to the UN," Hosseini tweeted.

More than 660,000 people have left Ukraine for Europe since the Russian invasion began on February 24, according to the U.N.’s refugee agency. Up to 4 million more could flee if the situation deteriorates further, the U.N. says, creating a migrant crisis not seen in Europe since World War II. Poland, Ukraine’s largest neighbor after Russia, has received around half of those refugees so far. Tents with food and medics have sprung up along the border to deal with the massive outflow of people. 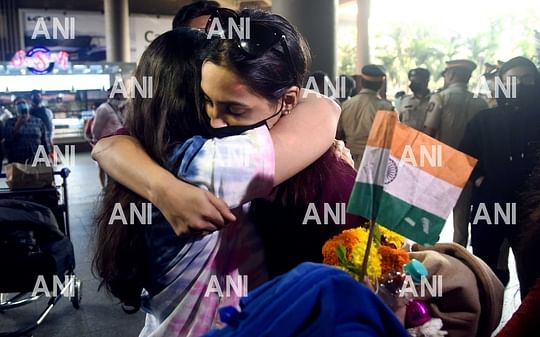