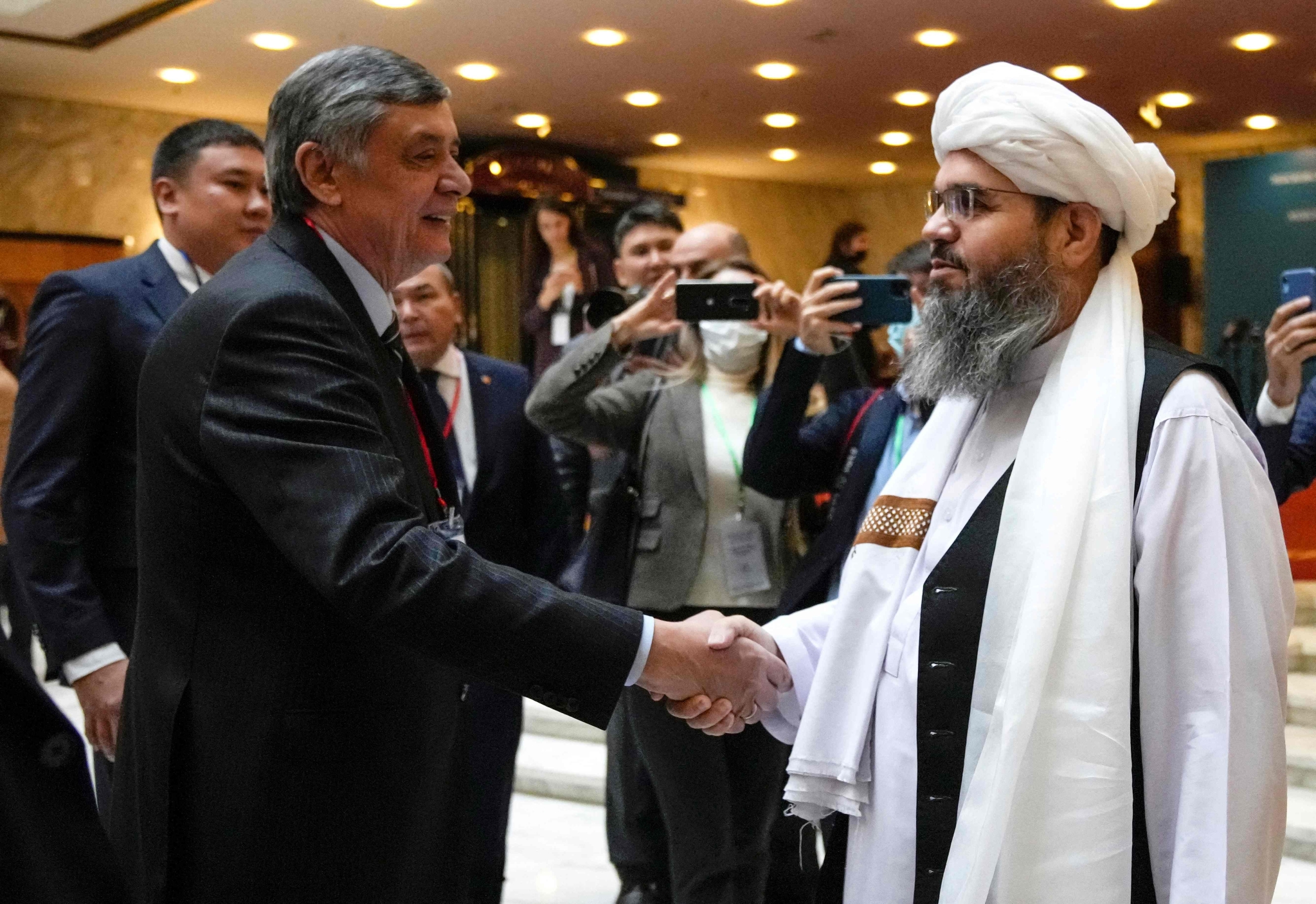 Russian presidential envoy to Afghanistan Zamir Kabulov (L) shakes hands with a member of the Taliban delegation Mawlawi Shahabuddin Dilawar prior to an international conference on Afghanistan in Moscow. | AFP

Russia on Wednesday recognised Taliban efforts to try and stabilise the situation in Afghanistan but expressed concern that "terrorist" groups threatened the stability of the entire region.

Russia is hosting the Taliban for talks as the Kremlin seeks to assert its influence on Central Asia and push for action against ISIS fighters which it says have massed in the perennially volatile country.

The talks are one of the Taliban's most high-profile international meetings since seizing power in mid-August.

"A new administration is in power now," Russian Foreign Minister Sergei Lavrov told officials from 10 countries including China and Pakistan.

"We note their efforts to stabilise the military and political situation and set up work of the state apparatus."

But Russia's top diplomat also said that "numerous terrorist groups" including ISIS fighters and al-Qaeda have been seeking to exploit a security vacuum in the country and raise their profile.

Lavrov expressed regret that US officials did not take part in the talks.

He urged the international community to mobilise and provide Kabul with "effective" aid to prevent a humanitarian crisis and a further refugee exodus.

The Taliban delegation is headed by Deputy Prime Minister Abdul Salam Hanafi, a senior figure in the new Afghan leadership who led talks with the European Union and the United States last week.

Those followed talks in Ankara between the Taliban and Turkish officials.

Brussels has pledged one billion euros ($1.2 billion) to avert a humanitarian crisis after the hardline group's takeover.

Moscow has reached out to the Taliban and hosted its representatives in Moscow several times in recent years, even though the Taliban is a designated terrorist organisation in Russia.

Putin and senior Russian officials have been voicing a slew of security-related concerns since the Taliban wrested control of Afghanistan and foreign troops pulled out after nearly 20 years.

The Russian president cautioned last week that some 2,000 fighters loyal to the ISIS group had converged in northern Afghanistan, adding that their leaders planned to send them into neighbouring Central Asian countries disguised as refugees.

Lavrov has warned that drug trafficking from Afghanistan had reached "unprecedented" levels, a concern echoed by the Kremlin during meetings with other Central Asia countries and China.

Despite reaching out to the Taliban, Putin and Russian officials have in recent weeks made clear Moscow is not moving towards formal recognition of the Islamist regime.

"The official recognition is not being discussed and that has been stated publicly," Lavrov has said.

In the 1980s, Moscow fought a disastrous decade-long war in Afghanistan that killed up to two million Afghans, forced seven million more from their homes and led to the deaths of more than 14,000 Soviet troops.