The Queen describes Prince Philip’s death as “leaving a huge void” in her life," their son Prince Andrew said on Sunday

Britain's Queen Elizabeth II has described the death of her husband of 73 years, Prince Philip, as having left a "huge void in her life", their son Prince Andrew said on Sunday.

As he left a memorial service for his late father, the Duke of Edinburgh, who passed away aged 99 on Friday, Prince Andrew said his passing was a "terrible loss" and the family was grateful for all the messages of support and condolence.

"It's a great loss. We've lost almost the grandfather of the nation," Prince Andrew, also the Duke of York, told reporters.

"I feel very sorry and supportive of my mother, who's feeling it more than everybody else. The Queen, as you would expect, is an incredibly stoic person and she described his passing as a miracle, and she's contemplating. She described it as having left a huge void in her life. We as a family are rallying around to support her," he said, on being asked about his mother's emotions.

About his late father, he added: "He was a remarkable man. I loved him as a father. He was always somebody you could go to and he would always listen." Among those at the Sunday service at a chapel in Windsor Great Park was the Queen's youngest son, Prince Edward - the Earl of Wessex.

"However much one tries to prepare oneself for something like this it's still a dreadful shock," said Prince Edward.

"And we're still trying to come to terms with that. And it's very, very sad. But I have to say that the extraordinary tribute and the memories that everybody has had and been willing to share has been so fantastic," he said.

"It just goes to show: he might have been our father, grandfather, father-in-law, but he meant so much to so many other people," he added.

Prince Edward said royal staff would feel a "very personal" loss following the Duke of Edinburgh's death and his heart goes out to them.

Special services of remembrance are being held across the UK on Sunday as the country observes an official week-long period of national mourning.

The Archbishop of Canterbury, Justin Welby, who is also expected to officiate at Prince Philip's funeral next Saturday, led a memorial service at Canterbury Cathedral.

"For the Royal Family as for every other, no words can reach into the depth of sorrow that goes into bereavement," he said.

In reference to Prince Philip, he said the senior royal as the longest-serving consort to a British monarch had shown "a remarkable willingness to take the hand he was dealt in life and straightforwardly to follow its call, to search its meaning to go out and on as sent to inquire and think, to trust and to pray".

Britain's period of national mourning will end after April 17, when Prince Philip's funeral will take place at St. George's Chapel at Windsor Castle. 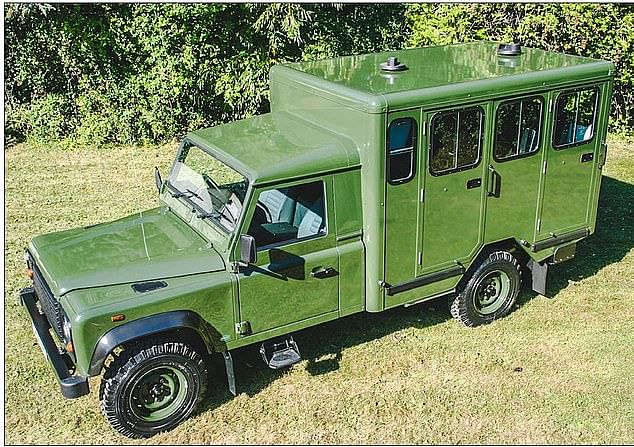 A Land Rover that Prince Philip, the Duke of Edinburgh, helped design over 15 years ago will be at the centre of his pandemic-induced scaled-back ceremonial funeral procession at Windsor Castle in south-east England next Saturday, according to details released by Buckingham Palace.

The vehicle is believed to be a modified Defender 130 Gun Bus, which was commissioned for use by the Queen's late husband in 2005 - three years before the British luxury brands Jaguar and Land Rover (JLR) were taken over by Tata Motors.

"At Jaguar Land Rover, we are deeply saddened by the passing of His Royal Highness The Prince Philip, Duke of Edinburgh," a JLR statement read. "Our thoughts and condolences are with The Queen and the Royal Family at this time. His Royal Highness devoted his life to public service and made a significant contribution to British manufacturing, engineering and design," it said. The coffin of the senior royal will be loaded into the Land Rover for an eight-minute procession to the gates of St. George's Chapel. London: United Kingdom Prime Mi­n­i­ster Boris Johnson will not attend Prince Philip's funeral, giving up his place for a royal family member. The Hill reported that only 30 people will be allowed to attend Philip's funeral next Saturday amid the coronavirus pandemic.

A spokesperson from the prime minister's office said that Johnson "wanted to act in accordance with what is best for the royal household, and so to allow for as many family members as possible will not be attending the funeral," The Hill reported citing multiple reports.

The PM honoured Philip after the news of the Duke of Edinburgh's death, saying he "earned the affection of generations here in Britain, across the Commonwealth and around the world."

It was reported Johnson said the royal family lost "not just a much loved and highly respected public figure, but a devoted husband, a proud and loving father, grandfather, and in recent years, great grandfather."

The Conservative Party in the UK announced it is suspending national campaigning until Tuesday and again next Saturday, the day of Philip's funeral.

Churches in Britain held services Sunday to remember Prince Philip as people of many religions reflected on a man whose gruff exterior hid a strong personal faith and deep curiosity about others' beliefs.

Archbishop of Canterbury Justin Welby led a service of remembrance at Canterbury Cathedral in southeast England for the husband of Queen Elizabeth II, who died on Friday at the age of 99.

Welby, who is set to preside at Philip's funeral on Saturday at Windsor Castle, led prayers for Philip, also known as the Duke of Edinburgh, and contemplated "a very long life, remarkably led." In London's Westminster Abbey, where Philip married the then-Princess Elizabeth in 1947, Dean of Westminster David Hoyle remembered the former naval officer's "self-effacing sense of service." Most people's glimpses of Philip in a religious setting were of him beside the queen at commemorative services, or walking to church with the royal family on Christmas Day. But his religious background and interests were more varied than his conventional role might suggest.

Born into the Greek royal family as Prince Philip of Greece and Denmark, he was baptised in the Greek Orthodox Church. His father was exiled and his family left Greece when Philip was very young. He became an Anglican when he married Elizabeth, who as queen is supreme governor of the Church of England.

In the 1960s, he helped set up St. George's House, a religious study centre at the royal family's Windsor Castle seat, where Philip would join clergy, academics, business people and politicians to discuss the state of the world.

He was a regular visitor to Mount Athos, a monastic community and religious sanctuary in Greece, and was a long-time patron of the Templeton Prize, a lucrative award for contribution to life's "spiritual dimension" whose winners include Mother Teresa.

Philip's longstanding environmentalism, which saw him serve as patron of the Worldwide Fund for Nature, was connected to his faith. He organised a 1986 summit in Assisi, Italy where representatives of Christianity, Islam, Judaism, Buddhism and Hinduism pledged to protect the environment. Philip said at the time that "a new and powerful alliance has been forged between the forces of religion and the forces of conservation." Blunt-spoken and quick-witted, Philip also was known for making remarks that could be deeply offensive, some of them sexist and racist. But former Archbishop of York John Sentamu, who was born in Uganda, said those who saw Philip as a bigot were wide of the mark.

"If somebody challenged him, you would enter into an amazing conversation," Sentamu told the BBC. "The trouble was that because he was the Duke of Edinburgh, the husband of the queen, people had this deference.

"I'm sure sometimes he regretted some of those phrases, but in the end it's a pity that people saw him as somebody who makes gaffes," Sentamu said. "Behind those gaffes was an expectation of a comeback, but nobody came back, and the gaffe, unfortunately, stayed." Inderjit Singh, a prominent British Sikh leader, said Philip had a strong knowledge of Sikhism and "contributed to the understanding and harmony between differing faith communities." "He recognised what we should all recognise....We are all of one common humanity," Singh said.

Philip's faith may have been partly a legacy of his mother, Princess Alice of Battenberg, who established an order of nuns, sheltered Jews in Nazi-occupied Greece during World War II and is buried below a Russian Orthodox church in east Jerusalem.

"I suspect that it never occurred to her that her action was in any way special," Philip said on a 1994 trip to Israel, where he visited his mother's grave. "She was a person with deep religious faith, and she would have considered it to be a totally human action to fellow human beings in distress." His interests in religion and ecology have been passed on to his eldest son, Prince Charles. The heir to the throne is a strong environmentalist who has said he wants to be "defender of faiths" when he takes the throne, rather than the monarch's official title as defender of the Anglican faith.