Peace deal with Taliban is conditions-based agreement: US Defence Secretary

After 18 years of war, the US and the Taliban signed the peace deal in Doha on Saturday to facilitate intra-Afghan dialogue in Oslo this month and the withdrawal of all foreign forces from Afghanistan in 14 months.

Washington: The peace deal signed with the Taliban in Doha over the weekend is a conditions-based agreement, US Defence Secretary Mark Esper has said, reiterating that this is an important first step towards a political solution to end the war in Afghanistan.

After 18 years of war, the US and the Taliban signed the peace deal in Doha on Saturday to facilitate intra-Afghan dialogue in Oslo this month and the withdrawal of all foreign forces from Afghanistan in 14 months.

"This was an important first step toward a political solution to end the war in Afghanistan. As I reiterated to our Afghan partners, this is a conditions-based agreement," Esper told reporters on his return from Afghanistan. 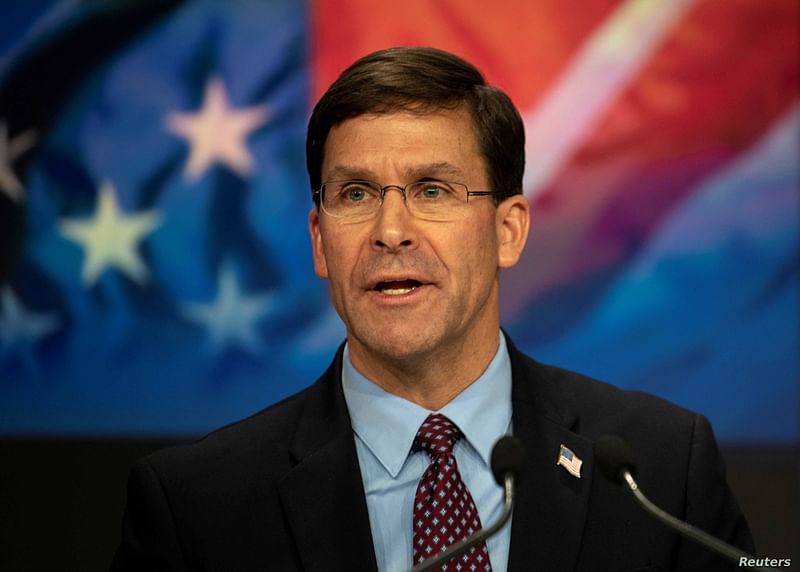 In an interaction with Pentagon reporters, Esper said that the US is watching the Taliban's actions closely to assess whether they are upholding their commitments.

"This agreement was enabled by the tremendous sacrifices our servicemen and women have made over the past 18 plus years," he said.

Chairman of the Joint Chiefs of Staff Gen Mark Milley said that a negotiated political settlement is the only responsible way to end the war in Afghanistan, and this was an important step.

"This agreement would not have been possible without the thousands of soldiers, sailors, airmen, marines that have served and sacrificed over the last 18 years.

We owe an extraordinary debt of gratitude to America's sons and daughters who made the ultimate sacrifice and their families, who have given their all to this nation," he said.

Responding to a question, Esper said that their expectation is that a reduced level of violence would occur and it would decrease over time as they move forward.

"So, this is going to be a step-by-step process, and we'll evaluate each day," he said.

Noting that the agreement calls for reduction of troops to 8,600 within 135 days, Esper said that he has already given his consent to start the drawdown.

"Our agreement, our commitment under the agreement was to enable, to facilitate the exchange of persons between the Taliban and the government of Afghanistan.

And I've said over and over, it's all conditions-based, but we are going to show good faith and begin withdrawing our troops and we can stop that at any moment.

We can pause it based on, again, changing circumstances," Esper said in response to a question. The mission, he said, is to make sure Afghanistan never again becomes a safe haven for terrorists to attack this country.

"We've been very successful for the past 18 years for doing that; and then number two, support our Afghan partners in the process; and then number three, again, as we can, bring our troops home, withdraw our presence in the country," Esper added.

Under the US-Taliban pact signed in Doha, the US has agreed to reduce its troops in Afghanistan from 13,000 to 8,600 in the next 130 days and withdraw all its soldiers in 14 months.

HomeWorldPeace deal with Taliban is conditions-based agreement: US Defence Secretary