As per the officials, among the deceased are one female and two children.

Nepal: Two earthquakes within 24 hours rock the country, toll rises to 6 |
Follow us on

Chief District Officer of Doti, Kalpana Shrestha informed ANI over the phone that five injured are being taken to the hospital.

"Five injured are being taken to the hospital. Dozens of house has been damaged with landslides at various locations across the district," she said.

As per the officials, among the deceased are one female and two children. However, the identities of casualties are yet to be ascertained The Nepal Army has been mobilised in the affected areas to carry out the search and rescue operations, the officials said.

Earlier local officials had informed that at least three people were confirmed dead after a house collapsed in the Doti district of Nepal, which underwent two earthquakes and an aftershock within a duration of 24 hours.

Chairman of Purbichauki Village Council, Ram Prasad Upadhyay confirmed to ANI on Wednesday that three people died in the incident.

Earlier during the early hours on Wednesday, an earthquake of 6.3 magnitude rocked Nepal, the National Centre for Seismology (NCS) reported.

Nepal | Visuals from Doti where buildings were reduced to debris in wake of the 3rd earthquake with a magnitude of 6.6 (as per National Seismological Center,Nepal) that occurred late last night

2 other earthquakes with magnitudes 5.7 & 4.1 occurred there y'day

According to NCS, the earthquake occurred at around 2:12 am (local time) in Nepal at a depth of 10 kilometres.

The tremors were also felt in India's capital New Delhi and its surrounding areas. 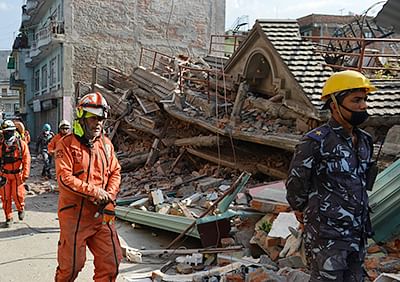 This is the second earthquake in Nepal within 24 hours.

Nepal also underwent an earthquake of 4.5 magnitudes on the early morning, of Tuesday, the National Centre for Seismology (NCS) reported.

According to NCS, the earthquake occurred 155km NE of Kathmandu, Nepal at a depth of 100 kilometres.

6.0 magnitude earthquake in Nepal on July 31

On July 31, an earthquake of magnitude 6.0 took place 147 km ESE of Kathmandu, Nepal at 8.13 am IST around Martim Birta of Khotang district, according to the National Earthquake Monitoring and Research Centre (NEMRC).

The depth of the epicentre was monitored at 10 km in eastern Nepal, determined to be at 27.14 degrees North latitude and 86.67 degrees east longitude.

Earlier in 2015, a high-intensity earthquake of magnitude 7.8 on the Richter scale struck central Nepal between its capital Kathmandu and city of Pokhara. It is estimated to have killed 8,964 people and injured close to 22,000 people.

The recent earthquakes in Nepal have caused unprecedented damage to lives and property and have necessitated the demand for well-framed policy measures to manage such disasters.

Nepal suffered its worst recorded earthquake in 1934. It was measured at 8.0 and destroyed the cities of Kathmandu, Bhaktapur and Patan.

It has been established that the Indian plate is getting subducted under the Eurasian plate at 5 cm a year. This is responsible for the formation and increasing height of young fold mountains of the Himalayas and also makes the region prone to earthquakes. Disasters like quakes can wreak havoc if preparedness is not ample.