This alleged confession is unlikely to find many buyers among Imran Khan's supporters, however. They are likely to blame the one actor they believe has motive to kill Imran - Pakistan's powerful military establishment

Pakistani journalist Hamid Mir posted a video on Twitter that purports to show the gunman who tried to kill former Pakistan Prime Minister Imran Khan confessing to the crime. The assailant was reportedly captured swiftly, following the incident on Thursday, in Pakistani Punjab's Gujranwala district.

The assailant, sporting a fresh bruise around his right eye -- police brutality is even more common in Pakistan than it is in India -- claimed that the former premier was "misleading people," and went on to claim that he was acting alone, and that the attack was premeditated.

On being asked why he attacked Imran Khan, the assailant replied, "Imran Khan was misleading people. I could not see that is why I tried to kill him. I had no intention to kill any one else except Imran Khan. I saw Azaan was being heard and these people were making noise through the deck and my conscience did not allow it.

"I had planned this ever since he left from Lahore and wanted to eliminate him. I am alone in this attack AlhamdulIllah, no one else was part of this. I came on a bike and parked it at my maternal uncle's motorcycle showroom before shooting at him." 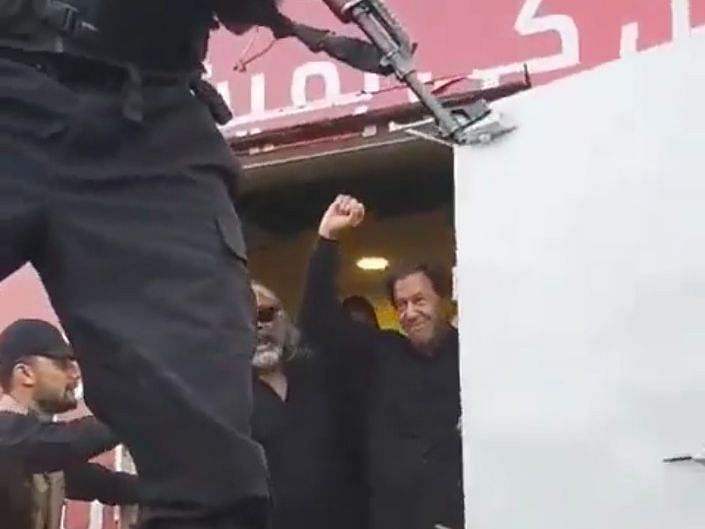 This alleged confession is unlikely to find many buyers among Imran Khan's supporters, however. They are likely to blame the one actor they believe has motive to kill Imran - Pakistan's powerful military establishment.

Since Pakistan’s founding 75 years ago, the nuclear-armed nation has been plagued by political volatility and military coups. Even in the calmest of times, the country’s military establishment has been the invisible hand guiding electoral politics, ushering its allies into positions of power and pushing away rivals.

The last prime minister to be driven from office before Imran Khan, Nawaz Sharif -- the older brother of the current prime minister -- was disqualified from holding office in 2017 over corruption charges in a controversial verdict by the Supreme Court. The elder Sharif sought refuge in London, joining a long line of political figures effectively exiled from Pakistan under the threat of criminal charges.

Analysts say the military was behind Khan's ascent to prime ministership for the first time in 2018 - a charge both have consistently denied - before falling out last year.

An opposition alliance voted Khan out of power in a parliamentary vote in April. Khan has since launched a political blitz calling for a snap election. He announced he would stage a protest march from Lahore to Islamabad starting last Friday.

During the rally, Pakistan Tehreek-e-Insaf (PTI) Chairman Imran Khan said, "DG ISI (ISI Director-General Nadeem Anjum) open your ears and listen, I know a lot of things but I am quiet only because I don't want to harm my country... I do constructive criticism for betterment otherwise there was a lot I could say."

That was a clear threat to the country's powerful spy agency.

The rivalry between Imran Khan and ISI has been an upbeat issue since Imran Khan's ouster from power. Earlier, Imran Khan said that the then-opposition coalition was "afraid" that he would appoint former ISI chief Lieutenant General Faiz Hameed as the next chief of the army staff.