North Korea test-launched a suspected intercontinental ballistic missile and two shorter-range weapons into the sea Wednesday, South Korea said, hours after US President Joe Biden ended a trip to Asia where he reaffirmed the U.S. commitment to defend its allies in the face of the North’s nuclear threat.

If confirmed, it would be North Korea’s first ICBM launch in about two months amid stalled nuclear diplomacy with the United States. Breaking its 2018 moratorium on long-distance launches, North Korea in March claimed to have test-launched its longest-range missile as part of its development of functioning nuclear-armed missiles that can reach the American homeland.

North Korea has been test-firing a flurry of ballistic missiles since the beginning of this year.

Japan confirmed at least two launches happened on Wednesday but acknowledged there may have been more.

Japan's Defence Minister Nobuo Kishi said first missile flew about 300km (186 miles) with a maximum altitude of around 550 km, while the second, reaching as high as 50 km, travelled around 750 km.

Kishi criticised the launches, saying they were "not acceptable" adding that it would "threaten the peace, stability and safety of Japan and the international community".

In a meeting convened after the missile launch, South Korea's National Security Council called the test a "grave provocation", the presidential office said.

The U.S. Indo-Pacific Command earlier said the missile launches highlight “the destabilizing impact of (North Korea’s) illicit weapons program” though they didn’t pose an immediate threat to U.S. territory and its allies. A command statement said the U.S. commitment to the defense of the South Korea and Japan “remains ironclad.”

The White House said Biden has been briefed on the North Korean missile launches and will continue to be briefed as information develops.

Biden, who left Tokyo on Tuesday night, had been briefed on the latest launches, the White House said.

During his summits with Yoon and with Japanese Prime Minister Fumio Kishida, Biden had promised measures to deter North Korea, including by potentially expanding the scope and scale of the US-South Korean joint military exercises.

Sullivan also reaffirmed the US’s “steadfast commitment to the defense of ROK,” it said, referring to South Korea by its official name.

The latest tests also come as North Korea grapples with its first confirmed COVID-19 outbreak since the start of the pandemic. More than three million people have shown symptoms of fever and at least 68 people have died since the outbreak began in late April, according to North Korean state media. 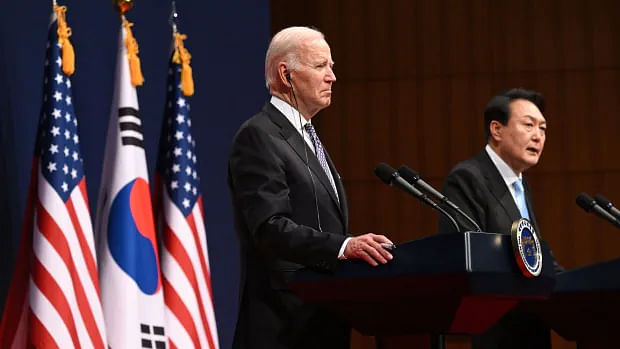