European airlines began skirting Belarus on Tuesday at the urging of the European Union, which also imposed new sanctions to punish the ex-Soviet nation's forced diversion of a passenger jet to arrest an opposition journalist.

In unusually swift action at a summit in Brussels, EU leaders agreed Monday to ban Belarusian airlines from using the airspace and airports of the 27-nation bloc, imposed sanctions on officials linked to Sunday's flight diversion, and urged the International Civil Aviation Organization to start an investigation into the episode some described as state terrorism or piracy.

On Sunday, Belarusian flight controllers told the crew of a Ryanair jetliner flying from Greece to Lithuania that there was a bomb threat against the plane as it was crossing through Belarus airspace and ordered it to land.

A Belarusian MiG-29 fighter jet was scrambled to escort the plane in a brazen show of force by President Alexander Lukashenko, who has ruled the country with an iron fist for over a quarter-century.

Belarus authorities then arrested 26-year-old journalist and activist Raman Pratasevich and his Russian girlfriend, Sofia Sapega. Pratasevich was later seen in a brief video clip shown on Belarusian state television, speaking quickly and saying that he was giving testimony about organising mass disturbances.

Pratasevich, who left Belarus in 2019 and ran a popular messaging app that played a key role in helping organise huge protests against Lukashenko, has been charged in absentia with staging mass riots and fanning social hatred. Those charges carry a prison sentence of up to 15 years.

The Telegram messaging app's Nexta channel that he co-founded has been labeled as "extremist" by the Belarusian authorities, and some fear Pratasevich could face more serious charges, including some that carry the death penalty.

U.S. President Joe Biden said late Monday that he asked his team to develop appropriate options to hold accountable those responsible, in close coordination with the European Union, other allies and partners, and international organizations.

"This outrageous incident and the video Mr. Pratasevich appears to have made under duress are shameful assaults on both political dissent and the freedom of the press," Biden's statement said.

Belarus has been rocked by months of protests, which were triggered by Lukashenko's reelection to a sixth term in an August 2020 vote that the opposition rejected as rigged. More than 34,000 people have been arrested in Belarus since then, and thousands beaten. 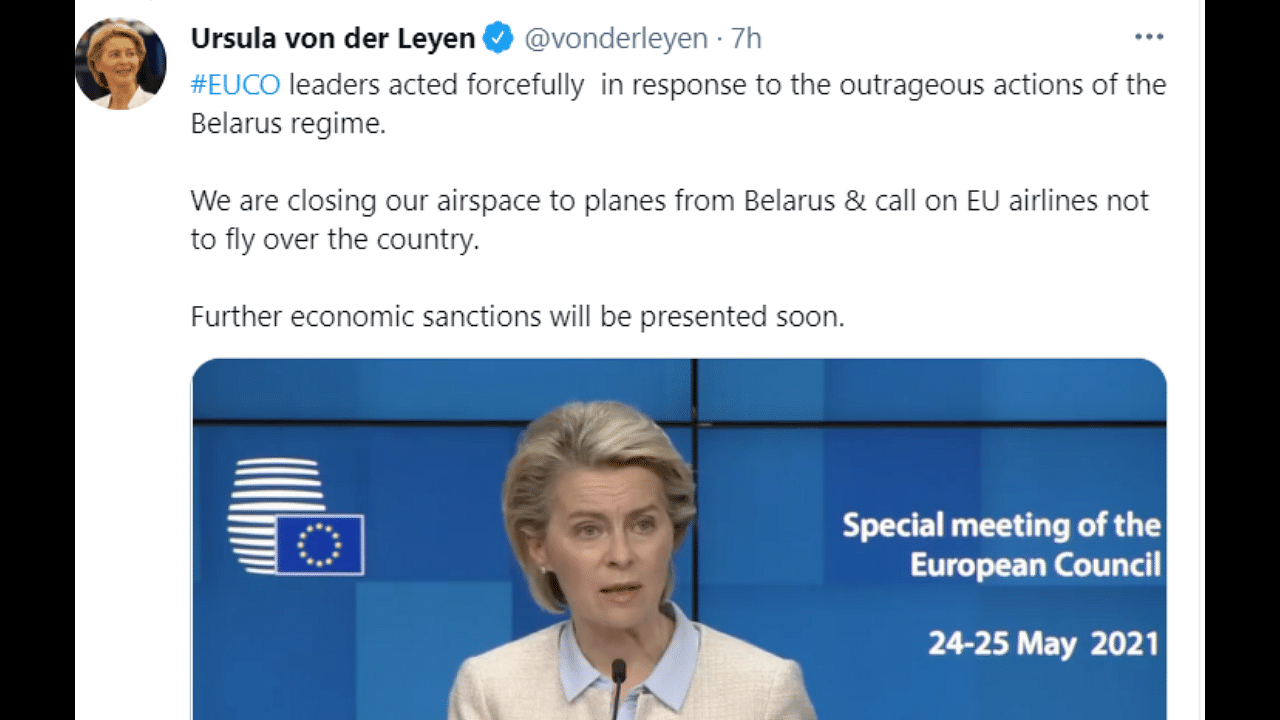 Read Also
Belarus opposition leader detained after 'govt hijacking' of flight; US calls for his immediate... 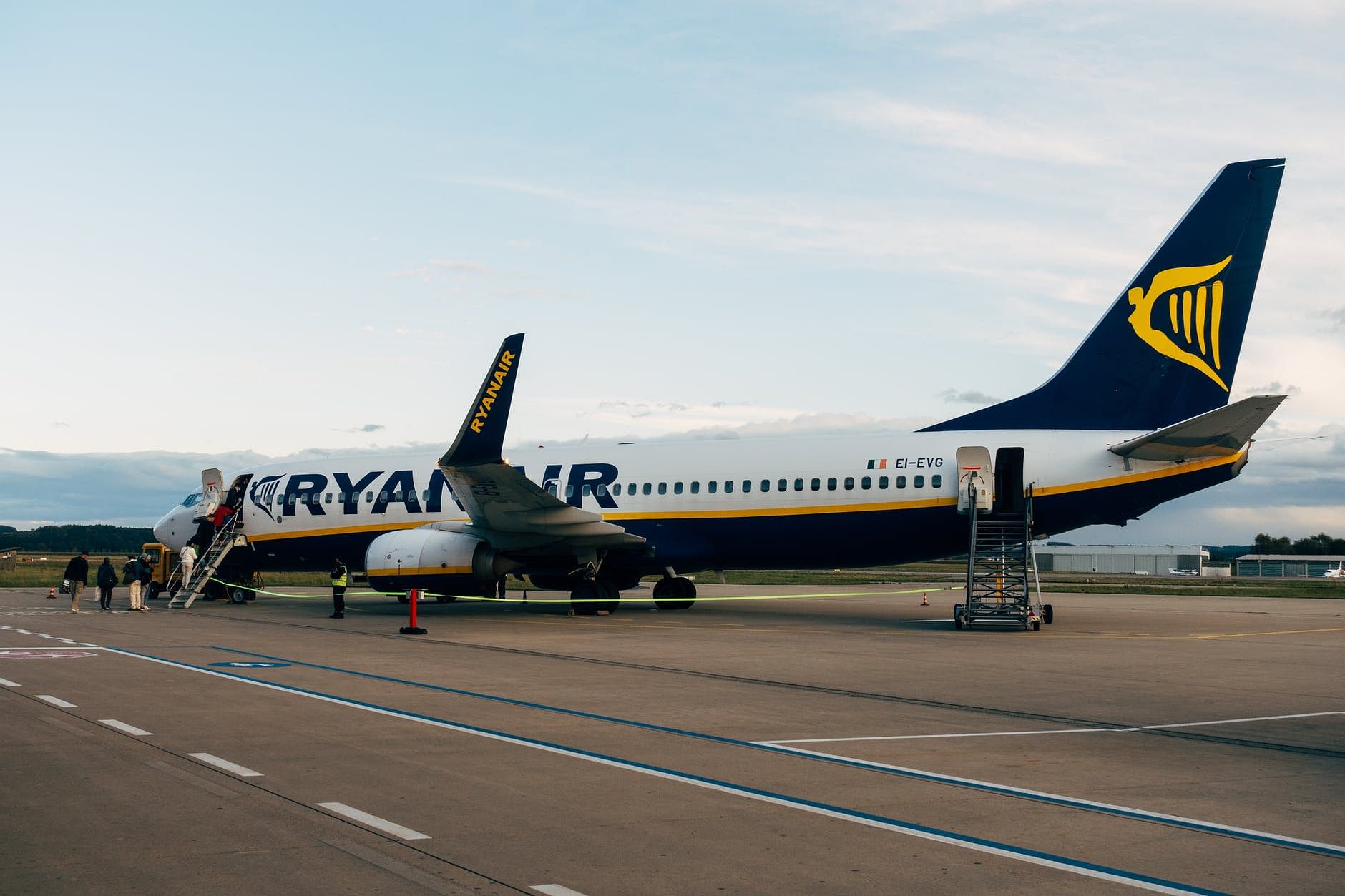 Belarus' isolation deepened Tuesday as commercial jets avoided its airspace, the European Union worked up new sanctions, and officials expressed concern for the welfare of an opposition journalist who was arrested after being pulled off a plane that was diverted to Minsk in what the West called a state-sponsored hijacking.

The dramatic developments put a spotlight on Belarusian President Alexander Lukashenko's iron-fisted rule and suppression of dissent - but it was not clear what effect more sanctions or other measures would have.

"Additional sanctions? Will this be sufficient? I absolutely can't say today," said French President Emmanuel Macron. But, he added: "The unacceptable character of what happened . justifies them." After his detention, opposition journalist Raman Pratasevich was seen in a brief video clip on Belarusian state television late Monday, speaking rapidly to say that he was confessing to some of the charges authorities have leveled against him.

The spokesperson for the UN's human rights office, Rupert Colville, said Pratasevich's appearance likely was not voluntary and that he seemed to have bruising to his face, although it was difficult to tell from the video.

Asked about the video, German Chancellor Angela Merkel agreed with Britain's Prime Minister Boris Johnson that it was "worrying and disturbing" and makes the EU demand for his release "all the more urgent." "And we will use all channels at our disposal to do this," she added.

The 26-year-old journalist and activist was arrested Sunday after Belarusian flight controllers ordered the Ryanair jetliner he was aboard to land, telling the crew that there was a bomb threat against the flight. A Belarusian fighter jet was scrambled to escort the plane to Minsk.

In an unusually swift response to the arrest and flight diversion, EU leaders agreed Monday to ban Belarusian airlines from using the airspace and airports of the 27-nation bloc and impose sanctions on officials linked to the diversion.

"The measures of restricting flights in particular . are extremely biting on the Belarus system," Macron said.

Belarus has defended its actions. Its Transport Ministry said Tuesday it has invited international aviation, US and EU authorities to investigate the diversion.

In the wake of the brazen move, Belarus' first post-Soviet leader, Stanislav Shushkevich, urged the West to introduce even tougher sanctions.

"Belarus has become a black hole' of Europe with repressions reaching a catastrophic scale and its dictator scrambling fighter jets and threatening the entire world," Shushkevich told The Associated Press in a telephone interview. "The West must understand that only increasing pressure and really tough sanctions could impact Lukashenko and limit repressions." EU Commission chief Ursula von der Leyen said the bloc will introduce more sanctions that will target "businesses and economic entities that are financing this regime" and her Foreign Minister Heiko Maas said that "any dictator who toys with such thoughts must know that there will be a bitter price to pay." Maas said Lukashenko's action "is hard to beat in terms of perfidy." "The lives of more than 170 passengers were endangered here to arrest a journalist. It's a threefold attack -- an attack on the safety of air traffic, on press freedom and the European citizens on board," he said.

And the EU plans to target companies close to Lukashenko. "We know that in this country, the major state companies make the money. This is going to hit them and everything is targeted towards making them feel the sting," said Dutch Prime Minister Mark Rutte.

Lukashenko has faced unprecedented pressure at home with months of protests triggered by his reelection to a sixth term in an August 2020 vote that the opposition rejected as rigged. But he has only doubled down on repression, and more than 35,000 people have been arrested since the protests began, with thousands beaten.

Some say more sanctions will do little to alleviate the situation and will only push Belarus even closer to its main sponsor and ally, Russia, and reduce the influence of the EU and others.

"Lukashenko will become an increasingly easy prey for the Kremlin," said Alexander Klaskouski, an independent Minsk-based political analyst. "As a pariah country, Belarus will find it much more difficult to fend off the Kremlin demands for the introduction of a single currency, the deployment of air bases and access to lucrative Belarusian economic assets." Even as the West condemned Belarus, the crackdown continued Tuesday. Pavel Seviarynets, the leader of the opposition Christian-Democratic Party, was sentenced to seven years in prison on charges of organizing mass riots.

"Most leaders of Belarus' political parties have been either jailed or forced to flee the country," said Ales Bialiatski, head of the Viasna human rights center. "Belarus is facing an acute human rights crisis... amid unprecedented political repressions." Pratasevich, who left Belarus in 2019, has become a top foe of Lukashenko with a popular messaging app he ran playing a key role in helping organize the huge protests, and authorities have increasingly tried to limit his influence.

The Telegram app's Nexta channel that he co-founded has been labeled "extremist" by Belarusian authorities. Stsiapan Putsila, another co-founder of Nexta, told AP that he and his colleagues have received "thousands of threats" in the past to blow up their office in Warsaw.

Pratasevich had been charged in absentia with staging mass riots and fanning social hatred. Those carry a prison sentence of up to 15 years, and some fear Pratasevich could face more serious charges, including some that carry the death penalty.

Colville, the U.N. human rights official, said Pratasevich's brief appearance on Belarus state TV "was not reassuring, given the apparent bruising to his face, and the strong likelihood that his appearance was not voluntary and his confession' to serious crimes was forced." The main opposition candidate in the last election, Sviatlana Tsikhanouskaya, who left the country immediately after the vote under official pressure, said she urged the U.S. to move to suspend Belarus' membership in the ICAO and Interpol.

Tsikhanouskaya also pushed for the G-7 to invite a Belarusian opposition delegation to its summit in London next month and thanked Macron for supporting her bid. But Max Blain, a spokesman for the British prime minister, said "the invite list for G-7 is already set" and wasn't aware of any request from Macron to invite the opposition.