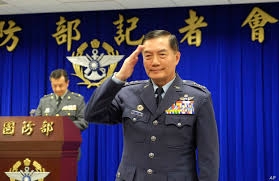 Taipei: Taiwan's top military officer was killed in a helicopter crash on Thursday, the defence ministry said, just days before the island goes to polls to elect a new president.

The chief of the general staff, Shen Yi-ming, was among eight senior officers including three major-generals who died when their Black Hawk helicopter smashed into mountains near Taipei.

The 62-year-old general and his entourage were on a routine mission to visit soldiers in northeast Yilan county when the incident happened.

Flags at all military units will fly at half-mast for three days as Shen was the highest-ranking military official to die while on official duty, the government said.

Lieutenant-general Tsao Ching-ping, one of five survivors, told rescuers in footage broadcast on local TV: "I am okay... two others are injured and only I can walk."

"There is one more person who's more seriously wounded and two or three people in the cabin ... while two more with no signs of life." President Tsai Ing-wen's office said that she will cancel all campaign activities for three days after the tragedy. The ruling Democratic Progressive Party will also suspend campaigning for three days.