The lawsuit, filed in state court in Manhattan, is the culmination of the Democrat’s three-year civil investigation into Trump and the Trump Organization, which the former President has dismissed as "yet another witchhunt"

Former US President Donald Trump | AP
Follow us on

New York Attorney General Letitia James alleged that former US President Donald Trump padded his net worth by billions of dollars and habitually misled banks and others about the value of prized assets like golf courses, hotels and his Mar-a-Lago estate, in a lawsuit filed on Wednesday that seeks to permanently disrupt the Republican’s ability to do business in the state.

Prosecutors in the state of New York allege that the Trump Organization committed numerous acts of fraud between 2011-21 -- including an allegation that they lied "by billions" about the value of real estate in order to get loans and pay less tax. 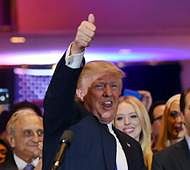 The lawsuit, filed in state court in Manhattan, is the culmination of the Democrat’s three-year civil investigation into Trump and the Trump Organization. Trump’s three eldest children, Donald Jr., Ivanka and Eric Trump, were also named as defendants, along with two longtime company executives.

Trump himself dismissed the allegation as "yet another witchhunt."

Not a victimless crime

The lawsuit is seeking to bar all four Trumps from serving as executives in any companies based in the state of New York, as well as banning the Trump Organisation from acquiring any commercial real estate or receiving loans from New York-based financial entities for five years.

In her lawsuit, Attorney General James pointed out the fact that white collar crime was not a "victimless crime", seeking to head off an argument that the Trumps' defence team could use in court.

"The complaint demonstrates that Donald Trump falsely inflated his net worth by billions of dollars to unjustly enrich himself and to cheat the system, thereby cheating all of us. He did this with the help of the other defendants,” James said in her lawsuit.

James, who is the state's most senior lawyer, does not have the power to file criminal charges, but is referring allegations of criminal activity to federal prosecutors, and to the Internal Revenue Service (IRS), which oversees and prosecutes cases related to tax fraud.

"With the help of his children and senior executives at the Trump Organization, Donald Trump falsely inflated his net worth by billions of dollars to unjustly enrich himself and cheat the system," James said in a statement.

She said Trump's own apartment in Trump Tower, which was valued at US$327 million, was among the properties whose values were allegedly misrepresented.

"No apartment in New York City has ever sold for close to that amount," James added.