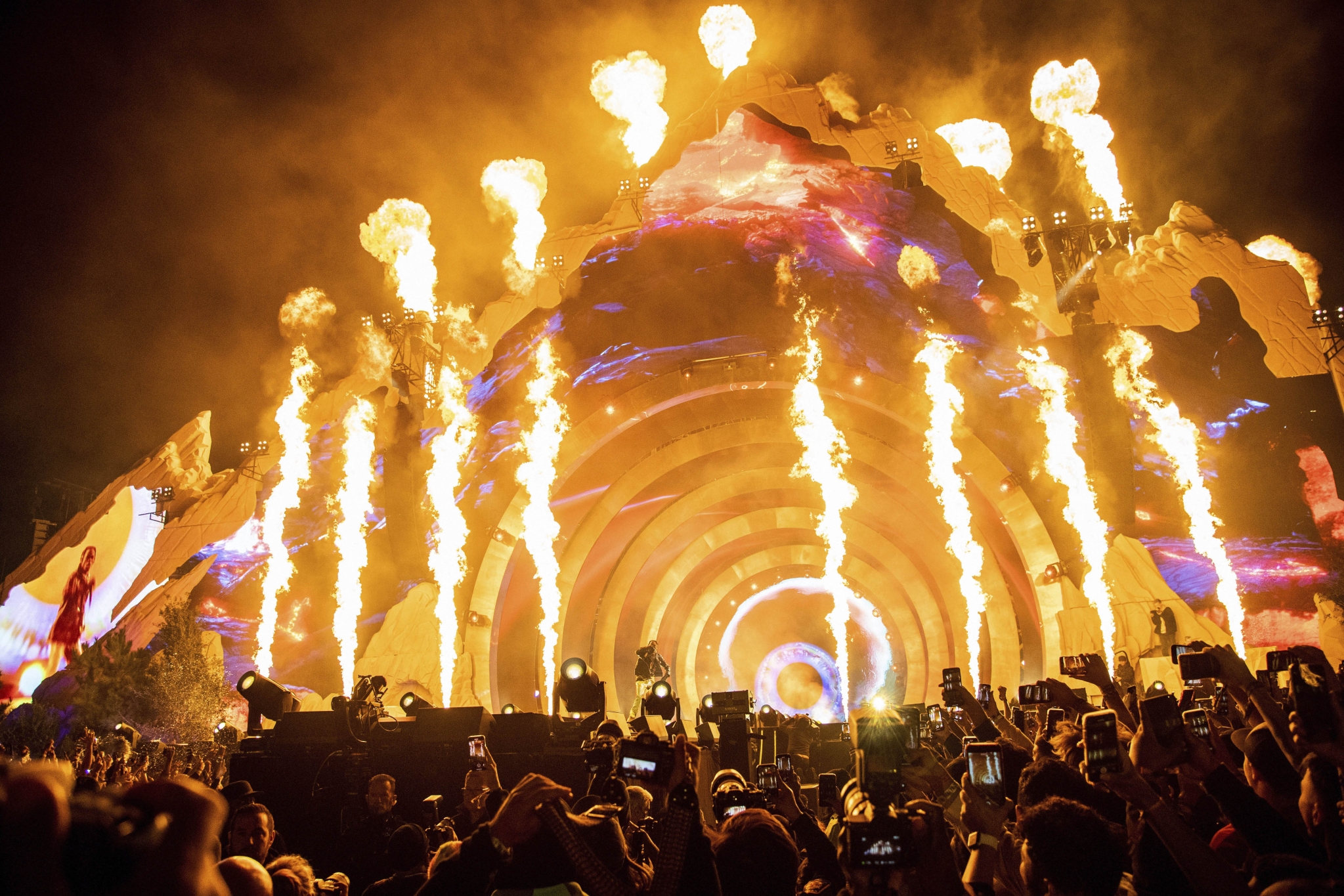 Houston: A popular sold-out music festival here in Texas turned into a "mass casualty" incident and left at least eight people dead and scores of others injured when a crowd surged towards the front stage, squeezing audience members who had nowhere to escape at the event attended by some 50,000 fans of American rapper Travis Scott.

The jam-packed concert featuring multiple acts by Scott at the Astroworld Festival in Houston had to be cancelled immediately as people started falling after the massive crowd began to compress toward the front of the stage around 9:00-9:15 PM (local time) on Friday.

"Astroworld event has been cancelled for Saturday! Please keep the eight victims and the hundreds injured in your thoughts and prayers," Houston Office of Emergency Management said in a tweet.

"The crowd for whatever reason began to push and surge towards the front of the stage, which caused the people in the front to be compressed -- they were unable to escape that situation," Houston Fire Chief Sam Pena told CNN on Saturday.

That sparked panic, and the situation worsened and overwhelmed security personnel there, he said. "People began to fall out, become unconscious, and it created additional panic," Pena said at a news conference.

"People go to these events looking for a good time, a chance to unwind, to make memories. It's not the kind of event you go to where you expect to find out about fatalities. . Obviously, this is the last place we want to be - especially after we've been through so much as a community. But we have incredibly capable law enforcement officials here,"Hidalgo said.

Multiple fans were trampled as hundreds rushed the event's perimeter. Once inside, some people began climbing onto portable toilets as security personnel worked to try and contain the crowd, ABC 13 news website reported.

"We had scores of individuals that were injured. The crowd began to compress toward the front of the stage, and people began to panic," Pena said during a news conference early on Saturday morning. Describing what unfolded as a "mass casualty" incident, the fire chief said that 17 patients were rushed to local hospitals.

More than 300 people were treated at the field hospital set up near the festival, Pena said, adding that the concert drew about 50,000 attendees.

So far, eight people have died and hundreds of others injured during the opening night of the popular weekend music festival, authorities said.

Governor Greg Abbott in a statement issued on Saturday said, "What happened at Astroworld Festival last night was tragic, and our hearts are with those who lost their lives and those who were injured in the terrifying crowd surge".

"Thank you to the first responders and good Samaritans who were on site and immediately tended to those who were injured in the crowd. The State of Texas is ready to assist in the response, and I have directed the Texas Department of Public Safety to make state resources available to support the investigation. I ask Texans to join Cecilia and me in lifting up in prayer those affected by this tragedy," Abbott said.

Houston Mayor Sylvester Turner said he has called for a "detailed briefing with all stakeholders," including law enforcement, Live Nation and NRG Park, to find out how the festival "got out of control." "What happened at the Astroworld Festival was a tragedy," he wrote. "This was a major event that happened in the city and on Harris County property. Today, law enforcement will speak with concert promoters and witnesses and review videos available from the event and inside the festival venue," Turner said.

The festival put out a statement on Saturday morning urging anyone with information on what happened to reach out to the Houston Police Department.

"Our hearts are with the Astro world Festival family tonight - especially those we lost and their loved ones," Astro World tweeted. "We are focused on supporting local officials however we can. With that in mind the festival will no longer be held on Saturday," it said.

Organised by rapper Scott, the third annual festival featuring multiple acts was scheduled to run from Friday to Saturday, according to the event's website. The view from SkyEye overhead Friday night showed the heavy police and fire department activity in the area of the event as organisers ended it early.

The organisers, rapper Scott and LiveNation, stopped the show when it was apparent that multiple people were hurt, according to Houston Police Chief Troy Finner, ABC 13 reported.

The crowd disregarded metal detectors and security guards who were checking bags.

Members of the Houston Police Department's (HPD) Mounted Patrol Unit were also on scene and worked to contain the chaotic scene.

HPD Executive Assistant Chief Larry Satterwhite was on-duty at the festival along with 367 police officers and 241 security officers, according to the ABC 13 report.

Giving his first-hand account, he said, "Once we started having the mass casualty incident, they were starting CPR on several people, and it happened all at once.

"It seemed like it happened over the course of just a few minutes. Suddenly, we had several people down on the ground experiencing some type of cardiac arrest or some type of medical episode," he said.

Finner said that while it was too early to know if the deaths or injuries were the result of criminal activity, his department is investigating any possibilities.

"Until we determine what happened, what caused the surge, we don't know," Finner said. "We will find out. Is there anything criminal? We don't know." Medical transports were already at the park for the multi-day festival, but staff was quickly overwhelmed with injured people, authorities said.

The event's tickets sold out within an hour of going on sale back in May. Scott, the popular rapper and organiser, launched the Astroworld Festival in 2018. Like most other large events, it was canceled in 2020 due to the COVID-19 pandemic, the report added.