World Water Day: Spotlighting a few warriors who are creating abundance in scarcity

They are using ingenious ways to deal with the water crisis, combining their approach with a mix of traditional knowledge and modern techniques, and involving the communities to build an oasis of hope

As a rule, whatever is fluid, soft and yielding will overcome whatever is rigid and hard. Harnessing the power of water that is all of the above, are the water warriors of the desert state, Rajasthan. They are using ingenious ways to deal with the water crisis, combining their approach with a mix of traditional knowledge and modern techniques, and involving the communities to build an oasis of hope. In the process, they are greening the arid region, preventing land degradation, providing employment to the rural populace, empowering women, alleviating poverty, and tackling challenges of climate change with their humble endeavours.

Teen water warrior Adhi Daiv was born in a farmer’s family in Rajasthan. Water that is the nurse and fountain of fecundity, the adorner and refresher of the world, is the one that he has seen wreaking havoc on women’s life. “Water is the cause of many woes for rural women. I have grown up hearing stories of the hardships rural communities face, especially women and children, due to water scarcity in the region. I wanted to find a long-term solution so that no child or mother is forced to leave their land due to the circumstances that arose in my life,” says Daiv. He and his mother started a community-based, not-for-profit initiative Project Urvara in 2020. “It aims to green the deserts and cultivate the natural oxygen cylinders, which is the need of the hour. We convert wastelands into a green cultivable belt with minimum water. We have taken it upon ourselves to educate, encourage and involve communities in this dry arid territory to grow plants with just one litre of water per plant for life,” he adds.

In 2019, he raised funds to provide water wheels to the rural women of his home state who walked for miles every day to fetch water for their families. It brought a temporary respite in their lives, but it was not a long-term solution. “The farmer suffers due to lack of water as 73% of the irrigation in Rajasthan depends on groundwater. Water also adds to women's woes, who are often at the receiving end of its vicious cycle, financially and socially,” he says.

Having seen it first-hand, Daiv decided to do something about it because he felt the urgent need to protect the land, soil, water, and people. His research findings pointed towards recharging the ever-depleting groundwater table by planting native trees, preventing soil degradation and enhancing biodiversity as the long-lasting solution. He travelled to the villages-meeting farmers, panchayats and elderly members of rural communities to find suitable indigenous solutions, and finally adopted Padma Shri Sundaram Verma’s one-liter water technique of plantation. “I have been advocating and campaigning to green the deserts with optimal water use for plantation. We want to impact the maximum number of lives through our initiative Urvara in Sikar, and elsewhere. Last year, we planted more than 2,200 trees with a survival rate of around 90% across 5.2 million sq feet of arid land,” he highlights. Project Urvara effectively saved 725,000 litres of water, enough to support 10,357 households for a day. Daiv estimates that the trees will generate 572,000 pounds of oxygen annually once they attain maturity, sufficient to support 1,200 families of four members each.

Sikar native Sundaram Verma was conferred Padma Shri for planting 50,000+ trees in the arid Shekhawati region of Rajasthan with an 80% survival rate, using a water-saving technique ‘dryland agroforestry’ that requires only one litre of water per tree throughout its lifetime. The method is a solution for conserving water in the arid, semi-arid regions and provides avenues of agroforestry leading to land management, revenue generation and sustainable livelihood. “It seems almost incredible to grow a plant in one-litre water, but a humble farmer with frugal means developed this technique and not a research institute that boasts of the best resources. There were very few officials or scientists in the government-run research institutions who encouraged me. With the help of Sristi Innovation, I could shell out Rs 30K as the institutional fee to get my technique evaluated by the reputed institute. Their evaluation boosted my confidence,” Verma recalls.

Hailing from a family of farmers, Verma had a keen interest in agriculture and being a science student, he had a profound understanding of scientific techniques that came in handy in his quest to improve the farming practices in the arid state. His focus has been agriculture-based on-farm research for crop improvement and conservation of agrobiodiversity in arid zone crops. “I seldom had to face failures in developing techniques such as water conservation or producing new species of new indigenous crops. But yes, I did face enormous difficulties,” he recounts, but seeing the growing popularity of his technique makes the arduous journey worthwhile.

Read Also
Virtual Reality of Metaverse: Understanding the good, bad and ugly of the digital universe Extolling the initiative being undertaken by Daiv, Verma says, “Urvara Project pulls at his heartstrings. It holds immense promise and potential for greening the desert. The boy has planted 2000 different saplings in five schools and a cowshed and plans to do more. It gladdens my heart to see young children take up the cause to save the environment and help alleviate poverty, improve soil fertility and provide animal feed while working towards climate change,” he says.

Champion of community’s cause

Jal Bhagirathi Foundation was formed as a public trust on January 15, 2002, to address the water crises in the world's most water distressed and densely populated arid zone, the Thar desert. “We have been working with local communities to create availability of drinking water in areas where there is none. We work within the limitations of environmental equilibrium by using traditional knowledge and traditional technology to construct region and location-specific rainwater harvesting structures,” says Kanupriya Harish, Trustee and Executive Director of the Foundation.

The Foundation's organisational structure is a unique amalgam of village-level volunteers and a resource base of professionals. The team of 20,000 village-level volunteers is assisted by members of a professional and technical workforce for effectively adopting and implementing a rights-based approach by mobilizing communities and planning, implementing, and monitoring development interventions. "We work at the village level where we create village-level water harvesting structures, and we also work in households where we do rainwater harvesting tanks based on the village's requirement. We sit with the villagers to decide what type of rainwater harvesting system must be developed in the village," says Harish.

The unique work model sees the community's involvement in planning the infrastructure and its financing. “Our work has a very unique financing model where the community bears up to 50% of the cost of any structure. They raise funds, create a village-level institution which is called Jal Sabha and all work is implemented through these total funds,” she adds. The Foundation works in areas where people do not have drinking water, and it entails not just creating infrastructure but also working closely with the local communities.

Nagaur farmer Himmata Ram Bhambhu a.k.a. ‘Registan ke Ratna Ram’ was felicitated with Padma Shri for his enviable contribution to the environment. He adores and reveres trees and has so far planted five and a half lakh saplings in desert areas of Rajasthan, using ingenious ways to water and see them grow into green giants. Bhambhu fondly recalls how his grandmother once made him plant a Peepal sapling and sowed a noble thought in his impressionable mind that eventually shaped his life. "She made me realise that humans could live at the most for 100, but trees live for hundreds of years. The thought stayed with me. Over the past five decades, I have been on a sapling planting spree in Rajasthan, and almost all of them have grown into green giants dotting Nagaur and other places in the desert state. They are my real wealth," he says.

The district is home to India’s largest salt lake, Sambhar Lake and so Bhambhu had an onerous task at hand - overcome the problem of saltwater that could foil his green plan. He devised ways to counter it, and chose trees that could withstand water scarcity in the arid state.

Read Also
Love is Love: This Valentine's Day, let's take a look at love in all its hues

He bought six acres of land in Harima village near Nagaur in 1999 and over the years, planted 11 thousand saplings, and today that patch of land has turned into a lush green forest and is the abode of hundreds of animals and birds. "Nagaur experiment proves that plants can grow in saltwater. We carried water from elsewhere, mixed it with saltwater to nurture this forest. Watering these saplings was a task in itself, but totally worth it. Our successful experiment here proves it. There are all kinds of trees in this forest, and what better than trees for rainwater harvesting. These are the biggest oxygen generators," he adds.

Currently, the septuagenarian is in mission mode to plant five lakh more saplings by 2030 in the state. "I look at the 7 Js - jal (water), jungle (forest), jameen (land), jeev (animals), jaivik (organic farming), jalvayu (climate change), and jansankhya (population) - as the major standpoints of my green plan because each are inter-related," he highlights.

The ethos of Padma Shri recipient Shyam Sunder Paliwal's life revolves around water, daughter and trees. A resident of Rajsamund district in Rajasthan, Paliwal is the architect of the Piplantri Model that hinges on water conservation, environment protection and saving the girl child. 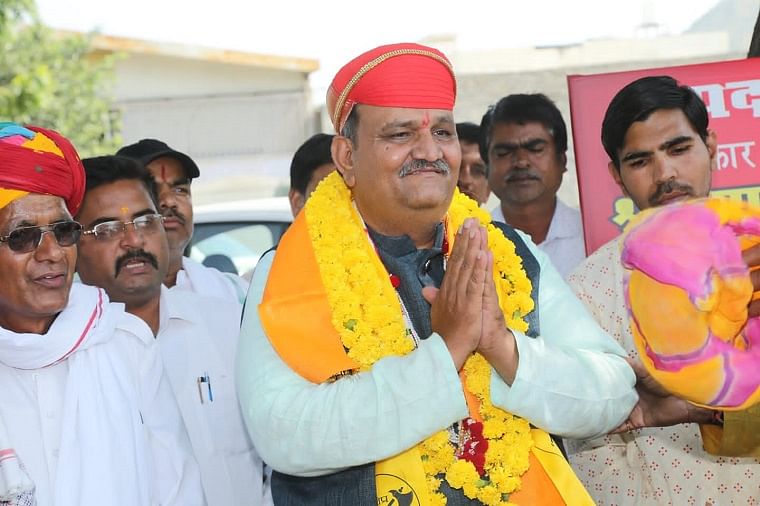 "It was not too long ago that the district was known as a hub of marble mining. When I took over as Sarpanch of Piplantari, I found that the water here was severely contaminated. The poor sex ratio was another worry. The winds of change began to blow when we started an initiative to plant 111 saplings to celebrate the birth of a girl child across the villages, nurture and help the tree thrive. Slowly, the rural communities had realised that the trees that would grow from these humble efforts would help the environment in more than one way. Simultaneously, we started water conservation efforts like building small check dams," says Paliwal, founder of Kiran Nidhi Sansthan, a grassroots organisation committed to rural development.

His initiative brought about a visible social change and helped water and environmental conservation in Piplantari. More than three lakh trees have been planted here in the last ten years, and the water level has increased to 50 feet from 500 feet. "It is heartening to see my penance bear fruits. It has been a long and arduous journey spread over the last two decades. We never dithered but stayed put, instilled confidence in the people and won their trust to do this wonder here. It was possible because the community came forward and pitched its support to these initiatives for tree plantation, water conservation and saving the girl child," he says.

But the work is far from over. The much-celebrated water warrior's Piplantari Model is the perfect medium to convey the message to others, and many Panchayats and village heads are following in his footsteps.

The work on these three fronts should continue all around the desert state and elsewhere in the country because it is an ongoing process. There can never be enough of these measures to save the environment from climate change. We need to do more, all the more," he emphasises.

Read Also
Safer Internet Day: Here's how parents can make the online world a safe place for their children HomeWeekendWorld Water Day: Spotlighting a few warriors who are creating abundance in scarcity