HomeWeekendWorking (with) the wanderlust: Meet the Digital Nomads for whom the world is their office

Working (with) the wanderlust: Meet the Digital Nomads for whom the world is their office

A laptop, smartphone, portable router, and an endless zest to travel… That’s all Digital Nomads need to work from remote locations, while they enjoy the sights as well. FPJ writer gets some perspective on what this peripatetic work-style entails

Shivya Nath recently posted this image of hers from her ‘outdoor standing office and home’ in Uttarakhand | pic: instagram/Shivya Nath

Does the word ‘workcation’ seem like an anomaly to you? It shouldn’t, as this is a new style of working while vacationing that’s hitting the peaks on popularity charts. Armed with technology and with the travel bug packed in a rucksack, Digital Nomads are making the seaside and mountain tops their workstations.

Have feet, will travel!

Kim LaRue, a US citizen, has been travelling and working in India since the last seven years. However, she is a nomad. Albeit a modern-day, unconventional one. Someone whose work is powered by technology, and social media. Her work, which is conducting astrology readings, healing and meditation — she conducts virtual classes - was given greater impetus by the current pandemic. LaRue spent around six months locked down in Gokarna, Karnataka, last year. Fortunately though, Gokarna being a coastal town with back-to-back beaches meant more space, thus more freedom. 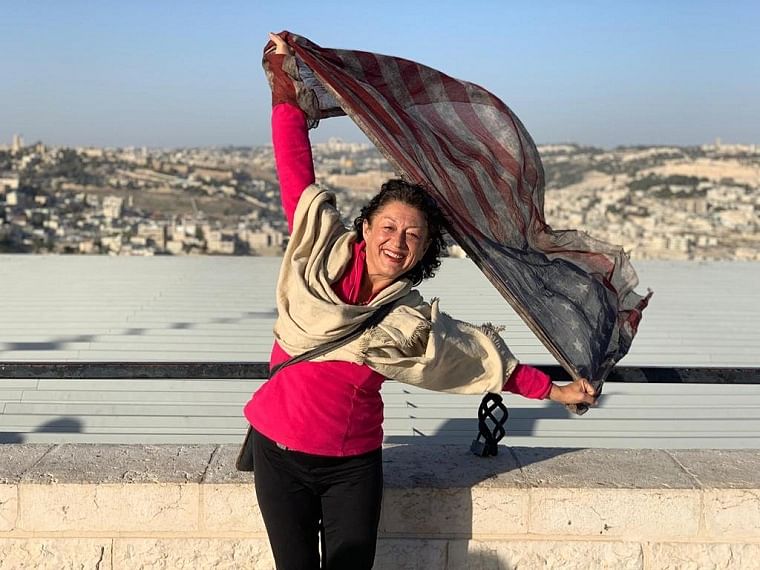 Kim LaRue on a visit to Jeruselam, Israel |

For meditation and healing practitioners like her, who work remotely today, being a digital nomad for the large part means being able to go wherever they want, and work from wherever they choose to live. She elaborates, “I have been travelling solo in India and Nepal since almost seven years. Today all my sessions are online, even from cafes and restaurants where I’m able to connect to the WiFi. My mother died of lung problems and after that I decided to move to India. I feel more at home here than in the US. During the summer, I live in the mountains, in cities and states like Manali, Dharamsala and Ladakh. In winter, I live in Goa and Gokarna and advertise my skills through my social media pages.” 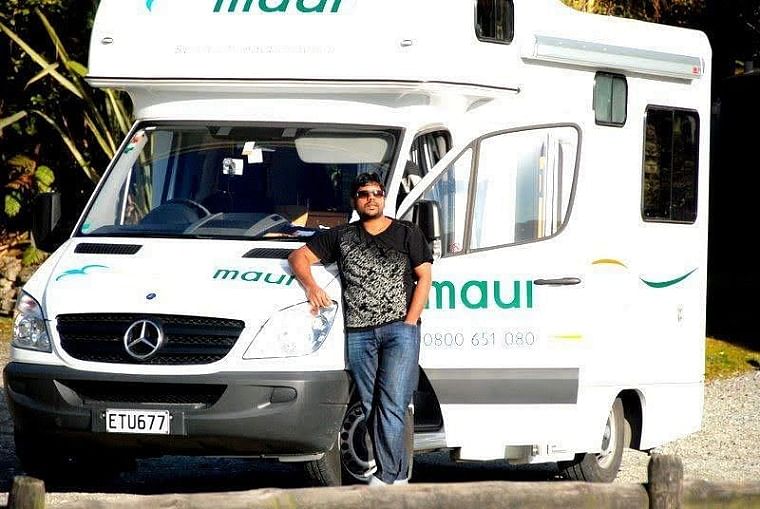 Karthik Tann travelling and working in New Zealand, in South Island. Here, he is seen in the Milford Sound Area |

There are others who also spend most of their days travelling, working from wherever they are vacationing, often basing themselves in small towns and cities for short durations. Hyderabad-based strategic and financial consultant Karthik Tann is another such itinerant workcationer, and he doesn’t “believe in working from one place for a long period”. Tann spends his time travelling from place to place be it Uttarakhand, or river retreats like Nellore down south. He started taking a lot of workcations since 2015 and has covered in general “almost 82 countries and most of India”.

‘I sold most of my belongings…’

Shivya Nath, travel blogger, vegan and “raw cacao lover” sold a lot of her belongings to live like a vagabond, and write about her trips to remote and quirky spots around the world. From rural Gujarat to Lesotho and the Kruger National Park, South Africa, she has been there, done that. In fact, she has also partnered with Microsoft programs for Instagram, shares on her WordPress blog — The Shooting Star — how she started off, surrendering some of her prized belongings after being a near-compulsive shopper and picking up things she “didn’t need”. “Back in 2013, I gave up my rented apartment and sold most of my belongings. In the years since, I’ve felt at home in many places around the world but not put down roots anywhere. Having no possessions and no commitment to a single place felt liberating on many levels… Until I found myself in lockdown!” she posted. 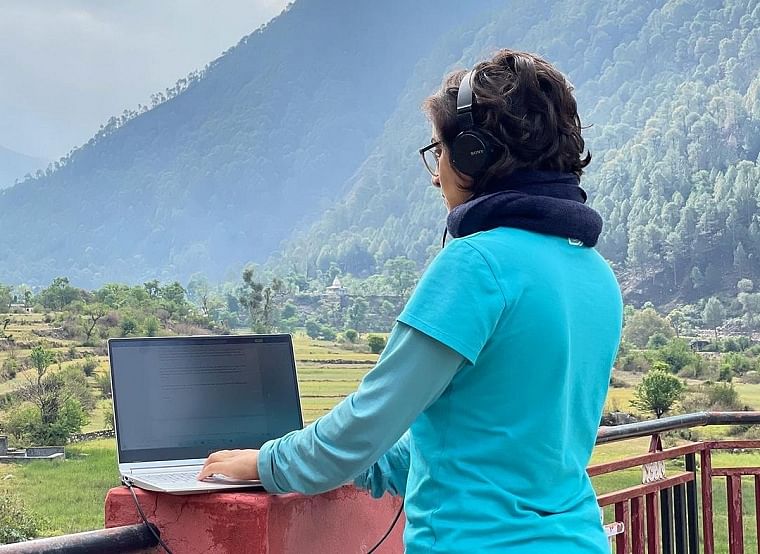 The year 2020 came as a shock to those who had decided to live life without committing to a single place, or owning a home. Travelling came to a halt and plans were thrown off gear. Shares Nath, “The initial months were tough, both professionally and personally. I had a few delayed payments trickling in which helped cover my expenses. But all travel assignments were put on hold, leaving the future uncertain. Surprisingly however, I quickly moved through phases of denial, shock, anger and disappointment, into acceptance. As an introvert, minimalist and someone who’s been ‘working from home’ since nearly a decade, the obvious challenges of lockdown living were easy for me.”

Anchor for corporate events and entertainment shows, as well as a NLP (Neuro-Linguistic Programming) trainer today, Neha Bhatia decided to start travelling three and a half years ago and offered her training sessions online (instead of in-person), so that she could work from anywhere that caught her fancy. As she wanted to be her own boss and own her own business and loved to travel, she decided to adopt a new kind of lifestyle, that of the ‘Location Independent Entrepreneur’. Bhatia explains, “A time comes in life when you recognize your true purpose, regardless of how much fame and money you have. So I started training people. It was also after that that I met the love of my life. We both loved travelling and so I thought why not save time and administer the same sessions for people online? We travelled many countries. This is the life I wanted to live and I could.” 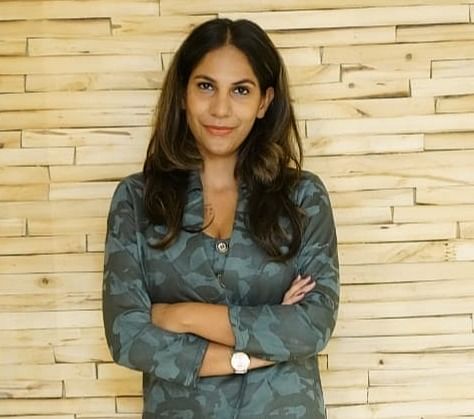 It’s all about (internet) connections…

What has been the most challenging aspect of being a ‘working traveller’ or a ‘digital nomad’ for these people? Many of them carry extra dongles or portable routers that they can connect to their smartphones and iPads or rely on their mobile hotspots to connect to mobile data. For some, the companies they are completing projects for have set up their own internal systems, software and networks where data can be shared internally.

Says Tann about these digi challenges while moving from one state to another in the country, “I carry my internet dongle (which does not give you a lot of speed always and works only where the coverage is available) and also use an Inmarsat satellite phone (which helps one connect to local phone networks and mobile data).” LaRue shares that she uses “my Jio modem”. “I also go to cafes and restaurants where I can connect to the WiFi. The house or home base I am staying at in a location for that period will also have an internet connection that I can use,” she says.

Some digital nomads also populate co-working spaces which can turn out to be expensive, or the local Starbucks that they believe offers good, reliable WiFi and where they don’t bother you much after you have ordered that one coffee! 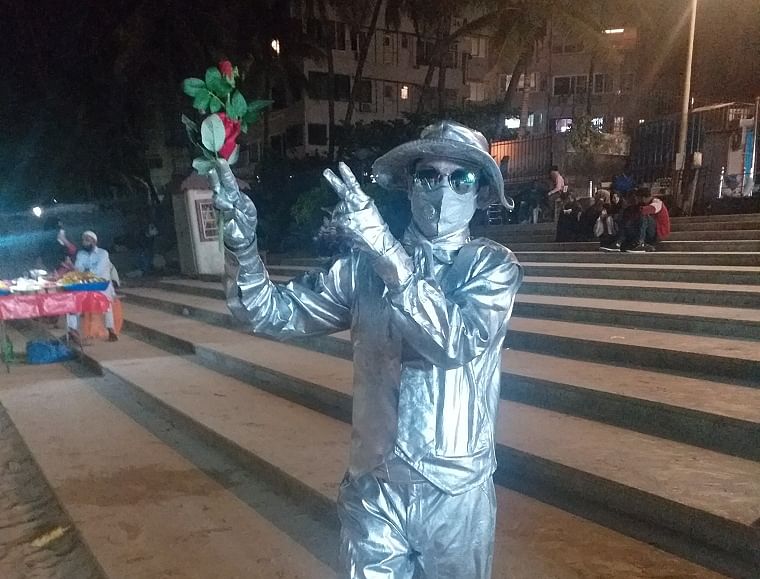