HomeWeekendMumbai: 'Tantra - On The Edge'... An exhibition of Indian tantra artists curated by Madhu Khanna

Mumbai: 'Tantra - On The Edge'... An exhibition of Indian tantra artists curated by Madhu Khanna

Tantra Art has been often viewed with coloured glasses that hid the reality behind the art, its inspiration and philosophy

When Madhu Khanna says, “Tantra was a way of self-exploration and self-introspection for most Indian artists in that era… a way to stand apart from the existing European Cubists, Impressionists etc…” one realises that she is not just talking about the exhibition that she has curated for DAG at the Taj Mahal Palace in Mumbai. She is revealing the psyche of the painters of 1960s and 1970s who went to Europe in search of work and fame only to comprehend that if they want a place in the international space, they must find their own style, their own mantra, their own tantra…

“That was a time when they were literally ‘on the edge’. They were burdened by the philosophies of the Modern Art movements across the world which spoke about impressions, expressions, constructions etc… They were seeking their own language. And while doing so, stumbled off the edge into tantra, an intrinsic element of Indian culture and spirituality,” she explains. 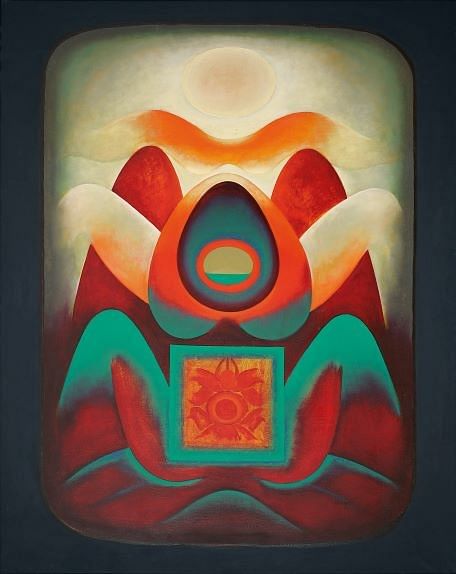 “Tantra art is ‘on the edge’ also because it has existed outside dominant mainstream of art history discourse and the purview of art scholarship in India. It carried the aura of historical past grounded on the sacred and the spiritual and was therefore often considered regressive.”

Madhu believes that artists who rejected imported styles of expression to create tantra-inspired art that is distinctly Indian, have not received the prestige they deserve.

For reasons that have deep roots in the Indian history of religion and culture, tantra has been perceived as the aboriginal right of the aghoris, tantriks, and others of similar tribe. As a result, the art that displayed the symbols associated are viewed differently along with the artist who paints them. 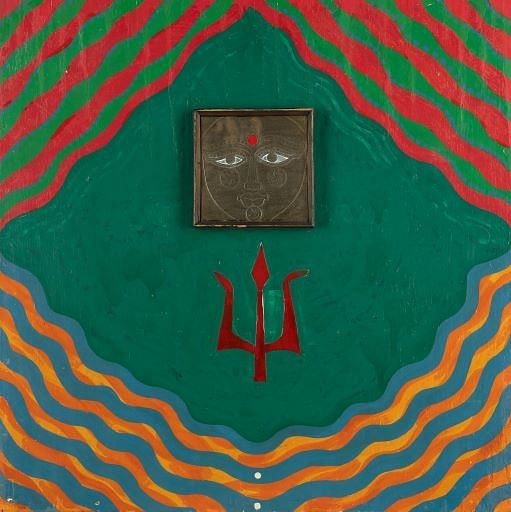 The best part is that none of these artists, in reality, were ever into religion in big way. Most were atheists. For them tantra was a way of expression, an art. The tantra art painters never founded a group. They were criticised. But they continued to paint their emotion and pain. The method that evolved was the tantra art. Tantra art was never an art movement in the popular way. None of these artists went out of their way to claim their art form, or to push themselves for recognition or acceptance.

Most of these artists moved from expressionist abstracts to tantra in search of soul. However, some like Barwe were introduced the philosophy of tantra by the followers of the cult in Varanasi. 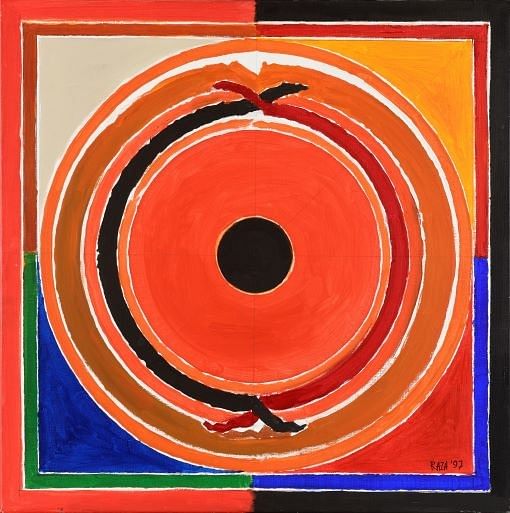 “The artists in the exhibition are not a homogenous group. There was no manifesto of tantra art or a well-defined artistic programme that committed the artist to a manifesto,” says Madhu.

While the exhibition has the usual suspects like Raza, Biren De, GR Santosh, Barwe… the surprise was Satish Gujral, who, to many, remains an enigma. “It is surprising that not many believe or know that Satish Gujral was a tantra artist,” exclaims Madhu. “It is more so because he himself had published his observations ‘Tantra and My Art’, which validated a shift in attitude towards great potential of tantra art, a reversal of a trend, a victory scored by the indigenous for of abstraction!” The exhibition has works of Gujral from the 1970s that uses geometric forms associated with the tantra. Madhu believes that it is the inner pain and conflict of Gujral that invoked spirituality and tantra in him.

“This exhibition locates itself historically in the larger cultural milieu of the 1970s and the excitement generated by the first ever tantra art show in London at that time. Each artist featured here reinvents their associational reflexes and their abiding link with tantra,” says Madhu.

Shobha Broota, Sunil Das, RB Bhaskaran, Jyoti Bhatt, Manu Parekh, Priya Mookherjee are amongst others who have found a place in the exhibition and the book, Tantra on The Edge: Inspirations and Experiments in Twentieth Century Indian Art. According to Madhu all explore the philosophical meaning of existence and the place of humans in the entire scheme of creations. The common thread remains macro-micro similarities that underlay in the tantric philosophy. 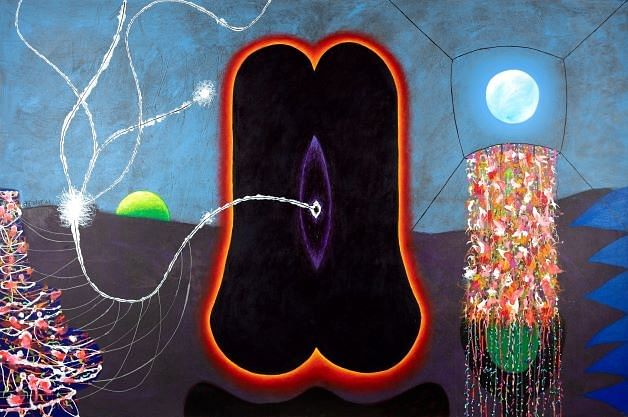 Tantra has been criticised at large and tantra art never appreciated. On this backdrop a travelling, curated exhibition and a huge coffee table book on the subject was a risk. Whose idea was it?

“Tantra, unfortunately, has never got its due as an art form. Precisely the reason why an exhibition like this and a book made perfect sense,” tells Madhu.

“The idea was mine,” says Ashish Anand, CEO of DAG. “While tantra and art was often talked about, a true connection was never established.” The well-researched book talks about tantra art, its origins, it being the expression of Indian artists, and about each artist’s individual style in detail. While the exhibition is more about the twentieth century masters, the book also talks about three artists of the later generation who carry the legacy of tantra art forward.

“Idea was to answer the multiple questions in minds of people about the connection of tantra and art that went beyond the use of symbols by the artists. Idea was to collate works and give a platform that will collectively document the influence of tantra of modern art of India,” he concludes. 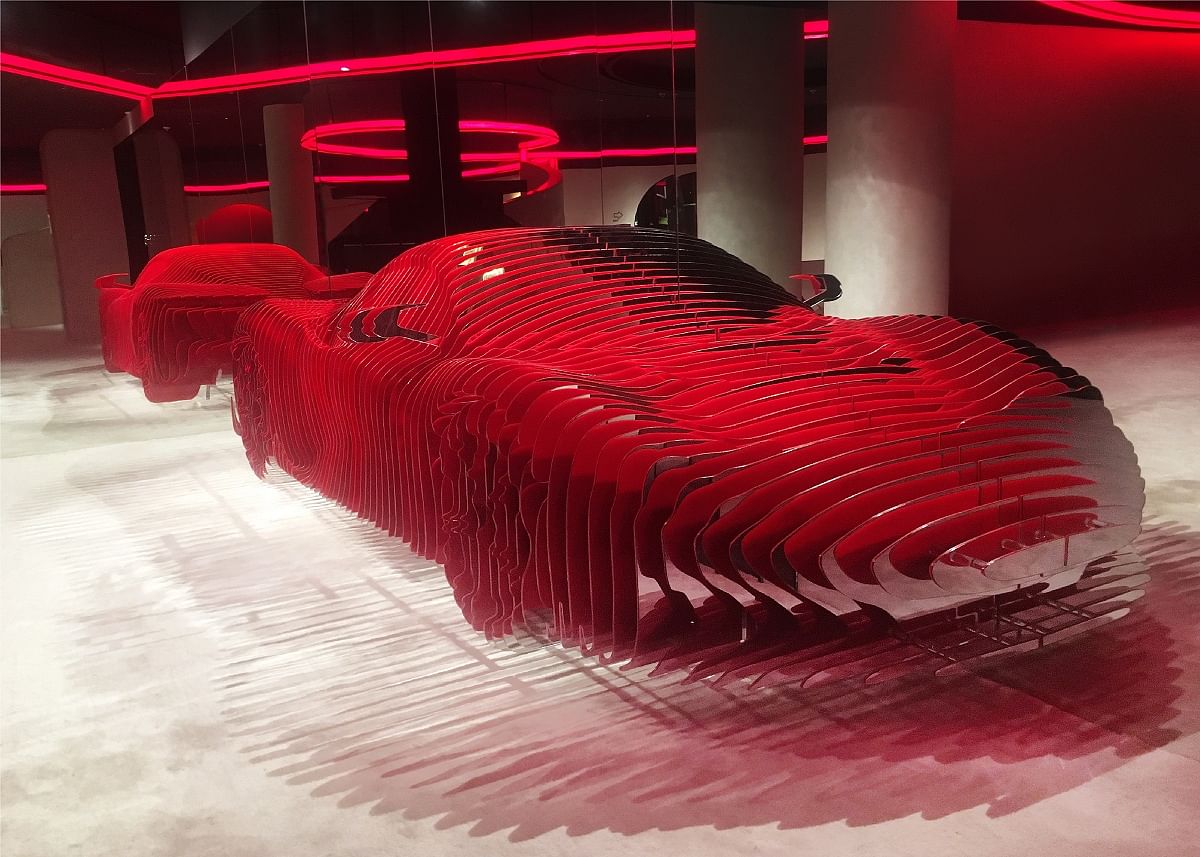