The festival of colours is celebrated differently across the country. Keeping in mind the ongoing COVID restrictions, here's a virtual tour of Holi hotspots

Holi is all about colours, water sprinklers, water balloons, meeting and greeting friends and acquaintances over gujia, bhang and thandai, and other delicacies. But far away from these usual fares are a few celebrations that do it differently.

It all starts in Barsana with the Laddu Mar Holi at Shri Radha Rani Temple, followed by the Lathmar Holi centred around Radha and Krishna’s legend. The festivities begin a week before Holi, and see the menfolk from Krishna’s village, Nandgaon, visit Radha’s village Barsana. Women dressed as Gopis playfully ‘hit’ the men with sticks to drive them away and play with colours. In Vrindavan, Phoolwalon Ki Holi with flowers in Banke Bihari Mandir, and with colours at the Gopinath Temple where widows congregate to enjoy the festival are other highlights during the days preceding Holi. The week-long celebrations culminate in Holika Dahan and the Dhulandi Holi a day after. 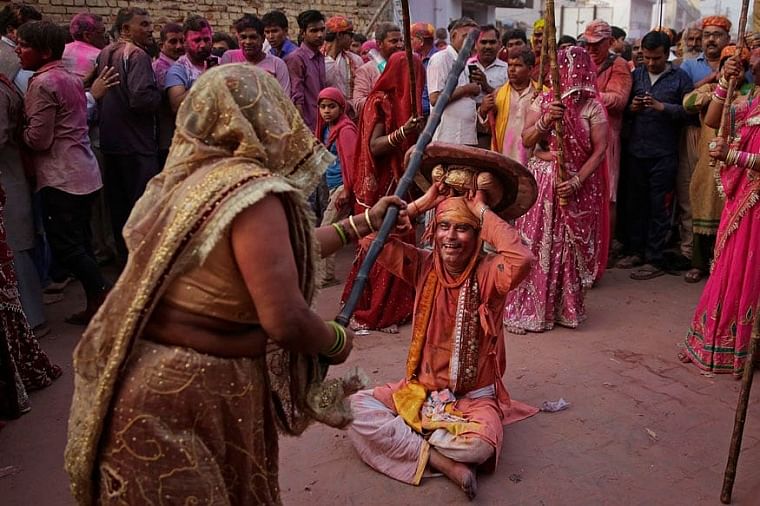 Momasar, a nondescript 500-year-old village situated 250 km north-west of Jaipur and barely 125 km from district headquarter Bikaner, in Rajasthan, plays the ubiquitous host to a unique, fun-filled celebration, Geendar Utsav, just days before Holi. Spread over three days and two nights, it celebrates the different hues of spring to the beat of traditional musical instruments, nagada and dhol along with dhap and chang. Another highlight is Geendar dance, where men disguised as women, don historical, mythological, political, and comic avatars, and dance away in gay abandon, giving the Shekhawati region its unique Holi carnival; the tradition has continued here since 1941.

Spring brings forth a unique celebration in Kumaon. Mahila Holi starts a week before the festival of colours. In this celebration, women make small groups and visit each other’s houses, apply colours and have fun swinging to the tune of traditional songs. Strangely, men are generally not allowed in this celebration. Ditto for women in Kundra village, Hamirpur district, Bundelkhand region in Uttar Pradesh, who take the lead in celebrating Holi. It is forbidden for men to play Holi here, and they stay away from colours while the women step out of their homes for one day, do away with their ghoonghat and enjoy the festival to the hilt. They gather at the Ram Janaki Temple in the village and sing traditional Holi songs before splashing colours on each other.

Kumaon region in Uttarakhand has another interesting tradition of celebrating Khadi and Baithaki Holi. The festivities start with Poush month (December) and last till Holi, also called Chhaldi or Chhalri. The highlight of these celebrations is the mellifluous ragas that fill the spaces every day. The jugalbandi of the instruments such as holiar dhol, manjire, harmonium, tongs, dhapli, make it more special. People gather around homes, public places of the village, and temples, and soak in the festivities. In every house, women, men and children dressed

in traditional costumes sit and sing Holi songs. On the other hand, Khadi Holi is celebrated by people, who move around the entire village in small groups, singing songs, greeting and meeting people, from house to house, and all of these happens while standing. The songs for Khadi Holi are fun-filled and don’t have to adhere to any particular raag as such necessarily, but there’s a lot of emphasis on lyrics.

Barhi village of Senha block of Lohardaga district in Jharkhand celebrates Holi in a unique way. It is called the Pattharmar Holi, and as the name suggests, here the festival is celebrated with stones. After Holika Dahan, shrubs of two trees — castor and silk cotton tree — are planted in the open ground near the village temple. On Holi, daredevils of the village run to uproot those shrubs from the ground as villagers present at the venue keep pelting stones at them. The stone-throwing continues till the uprooted shrubs are brought back to the temple complex. A race to enjoy

A unique race featuring wild hen, squirrels and crabs is organised in Bairagi village located in Manendragarh Tehsil of Koriya district in Chhattisgarh, three days after Holi. On the first day, men and children go to the nearby forests and fetch wild hen and squirrels, while the women go to the river and catch fish and crabs. On the second day, a small pond using polythene is prepared where the crabs and fish are let loose. Men are given the task of collecting these within a given period. The one who collects the maximum number of these is announced as the winner. For women, the task is a tad tough. The men let go of their prize catch of squirrels and rooster, and once free, they run towards the jungle, and women have to run after them and catch hold of these animals. If they do, then it is believed that the rains will be normal; if not, then women are made to pay the penalty in cash which is then used to organise a feast for the villagers.

Manipur in the north-eastern part of the country celebrates a unique form of the festival, Yaosang, spread over six days. Yaosang incorporates the old tradition of Meiteis — the local community in the state — and the profound influence of Vaishnavism in the region. The word Yaosang indicates the festival's agrarian origins, and in the local language, it means a small hut used for keeping sheep (yao means sheep and sang means shed). The festivities start on the full moon and combines Hindu and indigenous traditions. The highlight of the festival is the Thabal Chongba, a Manipuri folk dance performed in circles by young girls and boys to drums' beats during the moonlight. Yaosang Mei Thaba or burning of the straw hut is another ritual that is performed during the festivities. A small hut is built using twigs and bamboo. Offerings are made and rituals are performed during the day. After sunset, it is set on fire. The Hindus also play with colours in the state.

Read Also
Happy Holi 2021: Experience the essence of 'Lathmar Holi' through these incredible images from...