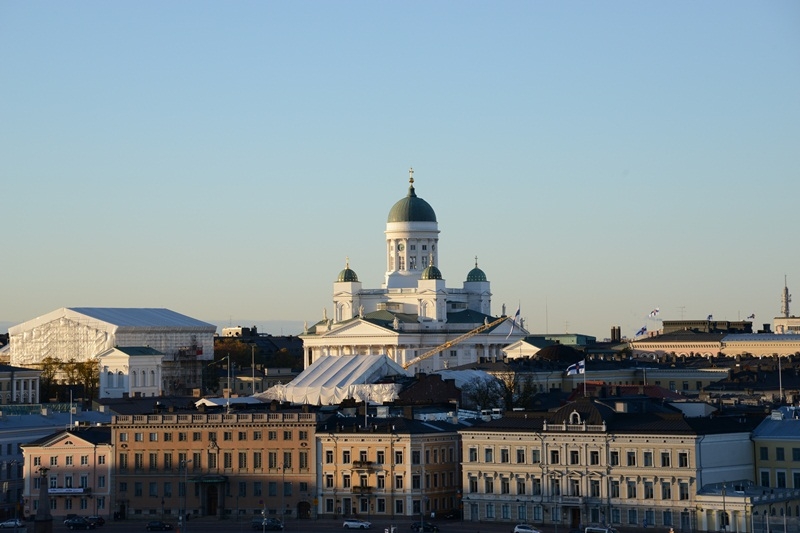 From grand cathedrals to ‘alien’ chapels and churches hewn from rocks, Helsinki has an interesting selection of unique places of worship, discovers RAUL DIAS

Do pardon the triple ‘H’ alliteration in the header of this travel piece. It’s not just that I have a great affection for that particular figure of speech. But in this case, it is very much deserved and thus, warranted. “Hail, Holy Helsinki!” was also the exact same phrase that I uttered when I got back to my cruise ship cabin after spending precisely eight hours in Helsinki, when the ship docked at the Finnish capital’s port for a day, halfway through its nine-day Baltic Sea itinerary.

Now, for a city of modest proportions such as Helsinki, that one can easily cover on foot in less than two hours, it sure has an interesting cache of — here goes another alliteration — churches, chapels and cathedrals.

Here are four of the most unique and awe-inspiring ones: 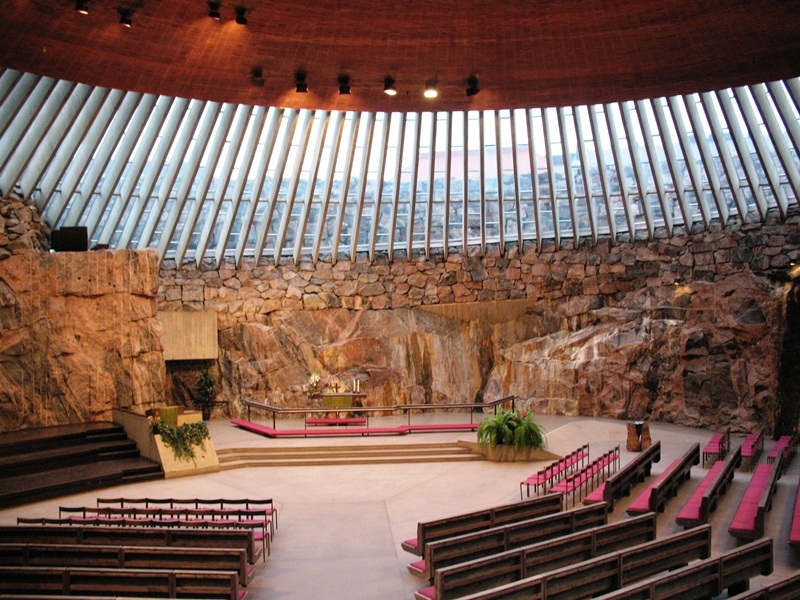 This neoclassical Lutheran cathedral is one of the most iconic buildings of Helsinki and cannot be missed as it occupies prime position in the centre of town. In fact, it was the first thing I saw of Helsinki from my ship cabin’s balcony as we docked. The imposing building dominates the city’s main Senate Square with its grand pillars, blue domes dotted with golden stars and statues of the twelve apostles along the roof that seem to lay guard over the city. Interestingly, the interiors of the cathedral are rather spartan and plain when compared to the elegant exterior.

However, the cathedral does hold an atmospheric crypt with a small chapel which is worth exploring if you have the time. A city landmark of sorts, the flight of stairs leading to the cathedral is where locals set up meeting spots. But the stairs is also a great place to sit down and marvel at the other neoclassical buildings encircling the square, all of which were designed by Carl Ludvig Engel. 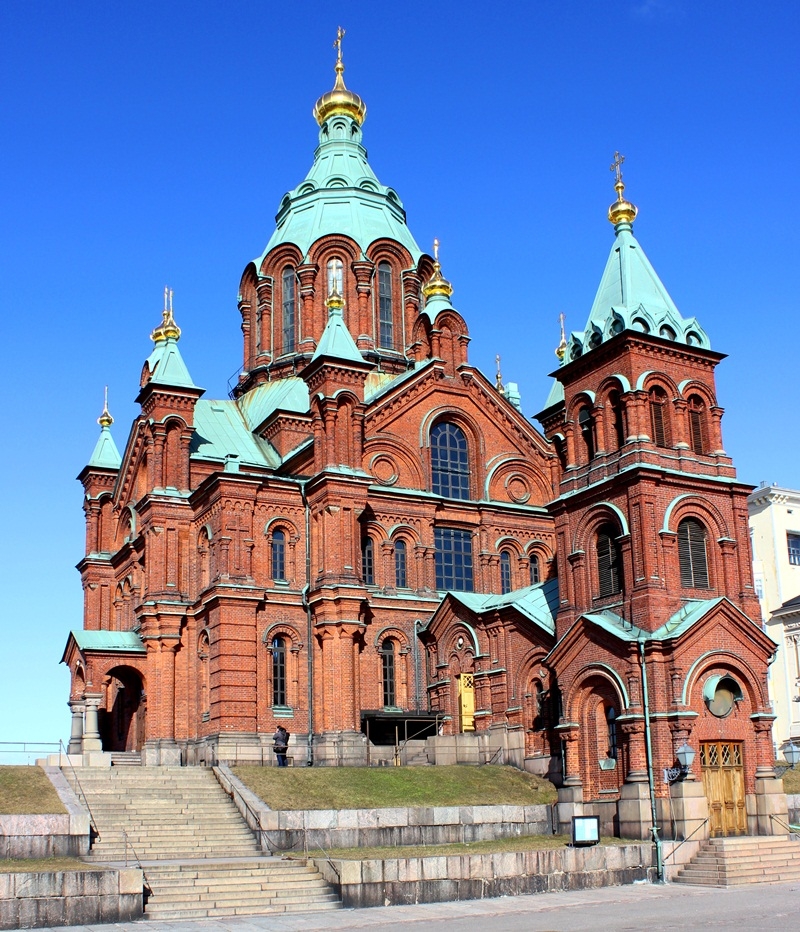 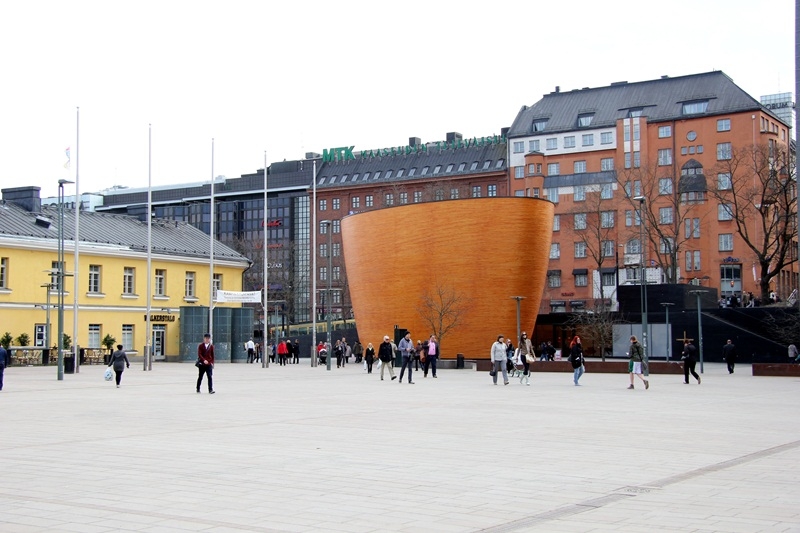 A spectacular red-brick building, the Uspenski Cathedral can be seen from a distance and forms a stunning part of Helsinki’s skyline. Set on top of a hill on Katajanokka island, you also get panoramic views of the city from outside the cathedral. As the largest Orthodox Church in Western Europe, the Uspenski Cathedral shows Russia’s influence on Finland as the country was part of the former USSR. Built in the Russian-Byzatine style, the green and gold onion-shaped domes resemble many of those found on churches in Moscow and St. Petersburg. The Orthodox style continues on the inside with an array of impressive chandeliers. The cathedral is also home to a number of religious icons that shine in all their gilded splendour.

Slap bang in the middle of Helsinki’s rather quiet downtown area, it’s very hard to miss the sight of the intriguing Kamppi Chapel. Also known as the ‘Chapel of Silence’, it has been described as resembling everything from a bow of a wooden ship to an alien egg, if you please! Whatever it reminds you of, it cannot be argued that it is brilliantly designed. In classic Finnish style, it is an ultra-modern and innovative design whilst also being simple and stylish. As the newest of the lot, it was dreamt up by the architects at KS2 and opened in 2012.

It is also very different from the rest featured in this article, in that, no religious events, such as baptisms or weddings, take place here. Rather, it is used as a quiet haven and escape for people to retreat from the noise of the city, for a moment of peace and calm.

I’ve truly saved my favourite of the four for the last. The final iconic church on my list is the Temppeliaukio Church or the Church of the Rock, or just Rock Church, which is also the most exotic of the quartet. Located in the heart of the city, it is carved entirely out of solid granite rock and is a beautiful sight to behold. Exuding a definite pre-historic, Flintstones-eque vibe, the church was planned by two Finnish architect brothers Timo and Tuomo Suomalainen and opened in 1969.

Natural light streams into the church through the skylight that surrounds the 22-diameter copper dome roof. The raw rock walls create excellent acoustics and the church is regularly used for concerts.