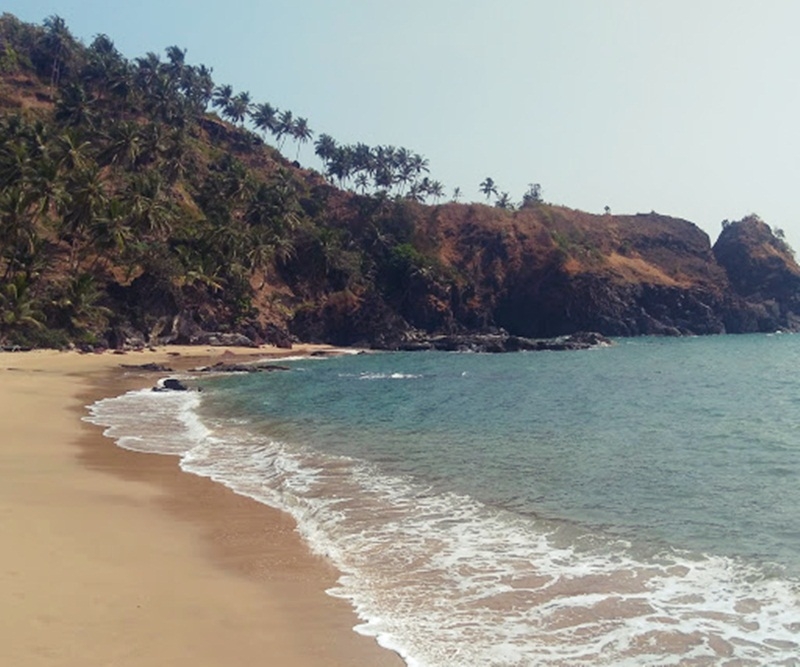 The first time we visited Goa, five years ago, we just had two full days in our itinerary for sightseeing. So we did the rounds of the churches and the temples, a few beaches up north, Dona Paula and Fort Aguada. But that trip only left me wanting more. There were all the beaches in the far north and south we had missed seeing.

I kept reading about them and had my itinerary planned for our next trip. So when we finally had the opportunity to visit this year, our agenda was simple. We would do the rounds of the rarer beaches of Goa.

The first time we visited, we stayed in Calangute. This time, we stayed in Panaji. If you are the type who dislikes hotel-hopping, Panaji is an ideal location. The northernmost point of Goa, Fort Tiracol, is approximately 60km away and if you want to go down as far as Galgibaga beach in the south, it is about 85km away. So, Panaji’s not quite in the middle but close. This time we had four days reserved for sightseeing. 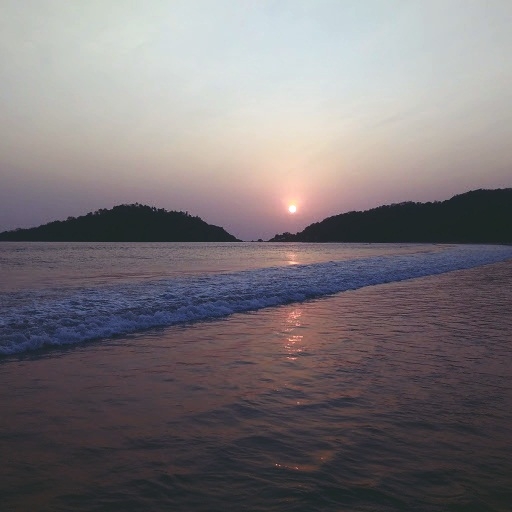 On the first day, being well-rested and already having paid obeisance to Miramar beach on the day of our arrival, we decided to head south. Our first stop, Betul beach, proved hard to find. The driver of our car took us to Betul village, assuming the beach was in the vicinity. Asking around, soon we found ourselves at the outskirts of the village. We did find a stretch of land near the water but no beach, for sure. There was a Hindu shrine and the Betul fort. Google and state maps showed a body of water separating the village and Betul beach on the other side, closer to Mobor beach. This beach was going to prove elusive, like the betaal of the Vikram and Betaal television series.

Luckily, our next stops, the Cabo de Rama fort and the Cabo de Rama beach were en route. The beach comes before the fort but we stopped to enjoy the awe-inspiring views of the sea from atop the fort first. Finding the beach was quite a task in the afternoon sun, especially as our driver left us halfway, but we were rewarded by the sight of the clear blue waters and the quaint little beach.

Then we proceeded to Agonda beach and finally, Palolem beach. On the way to Agonda, there were two stunning beaches — Kakolem Beach (also known as the Tiger Beach) and Khola (Cola) beach in Khola village. When I asked locals about the whereabouts of these beaches at Cabo de Rama Fort, no one seemed to know. But we proceeded, determined to find it. We reached the entrance to Khola beach and a shopowner told me we had left behind Kakolem beach a kilometre behind. We headed back and we found the red, winding road, as we had been told. Further down the road, we found a collection of rocks, with the words Kakolem Beach painted on them, safely tucked out of plain view. 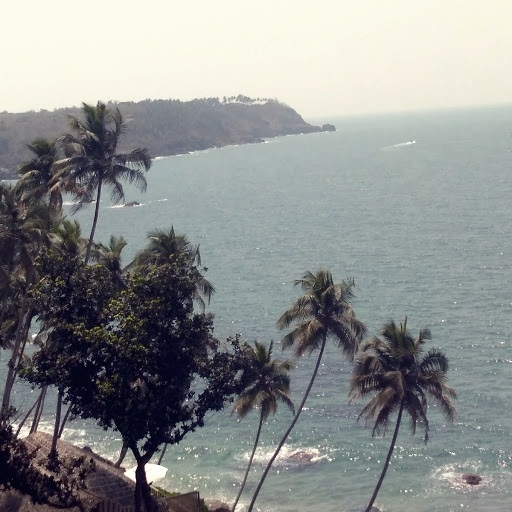 There were two routes to the beach. One was through private property and the other was down the red, winding road. Our choice was cut out — the red, winding road it would be. There was a fairly steep descent. I was edgy, I have to confess but was in no mood to turn back. I found myself thinking why the beach was also called Tiger beach. But I just kept following the steps. And lo and behold, my heart leapt with joy when I saw some shacks, which meant the beach was nearby. I was thrilled to find this exotic, hidden haven and spent about ten minutes taking in the surroundings, with the cool waters lapping my feet. The joy of finding Kakolem beach would always be cherished.

The next stop was Khola beach. Our driver again ditched us halfway to the beach as the approach road was rocky and uneven and he did not want to take risks with the car. I realised then, the wisdom of those zipping about on two-wheelers — they had picked the best way to get around Goa. Reaching the beach on foot took some effort but it was worth it all when we cast eyes on the pristine beach. To get back to our car, we had to pay a local Rs.300 for a ride in his trusty jeep.

Next stop: Agonda beach. Another delight. After a leisurely stroll, we set off for Palolem beach. Unluckily for us, we missed the boat tour which promised a trip to Butterfly beach, a glimpse of dolphins and Honeymoon Point, as we reached at 6.15pm. But luckily for us, a spectacular sunset was waiting in the wings. The cruise would have to wait for now.

As we returned to Panaji, the wife kept dissuading me from coming back all this way, just for the missed cruise. But that did not stop me from harbouring hopes.

On Day Two, we headed north. Our first stop was Candolim beach. A fine beach and probably one of the longest in Goa. We then headed to Morjim each, traversing the length of this beauty till we reached the adjacent Ashwem beach. On the way to Morjim beach, we were surprised to see several shops owned by Russians (we even saw a billboard of Putin) and on the beach, one of the cafes had a signboard in Russian.

Arambol beach was next and then Keri (Querim), the last beach in the north. Once again, the heart soared and the feet walked on the sand, seemingly of their own accord, and it felt as though the sea came to shore at regular intervals to anoint them lovingly.

Keri beach, with a short shoreline, was another heart-stealer. Having come this far, we proceeded to the jetty, from where we could take a ferry to Fort Tiracol. The ferry had just left our side of the shore and we had to wait 30-40 minutes for its return.

The ferry returned only for us to find, to our dismay, that our car could not go in it as the waters had receded and the car wheels could get stuck in the sand. On to Plan B — approach fort by road, 15km away. It involved crossing the border into our beloved Maharashtra. But this was managed and we reached the fort, a luxury boarding place with a stunning view — the endless sea and Keri Beach in front of us.

However, we had a sunset to catch, from Chapora fort and could tarry no more. Fort Chapora was an hour’s drive from Tiracol fort and after having climbed up the steps, I found a nice spot on the hill from where one had panoramic views of the Vagator beach. Unfortunately, that evening, the sky was overcast and the sun remained coyly obscured by the clouds. We were disappointed, but the balmy breezes blew away our lament. We were glad we came and saw.

Just below the hill was another small beach, which was likely the Chapora beach. I could see benches sprawled out invitingly, teasing, come spend the night here lulled to sleep by the sound of the waves.

On the list was Siridao beach, in Panaji itself. A letdown, with garbage strewn around. Next was Hollant beach in the south. This beach does not have much of a shoreline, especially during high tide. It is pretty, but again, we found bottles strewn about and an errant crowd, which took the fun out of things. It was nearing 6pm when we reached Velsao beach, the first of the beaches down what should rightfully be called Beach Road. It’s also the road which leads to Colva, Utorda and Mobor beaches, among others. 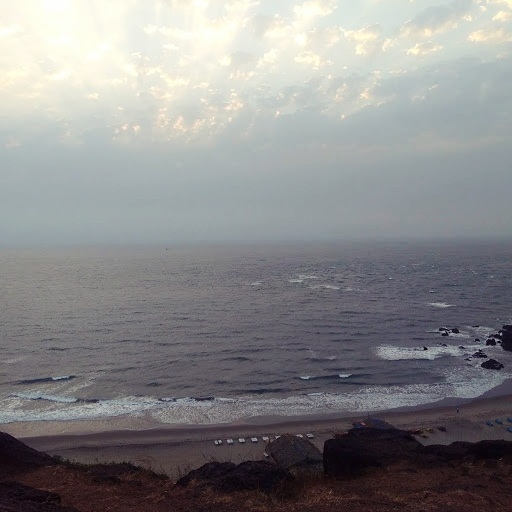 At Velsao, we saw the setting sun right in front of us. Glorious. The distinguishing feature of this beach is sand so pale, it looks white. We parked ourselves in a quiet spot and devoured the sunset for the next thirty minutes or so. There were very few people around. The evening breeze gently blew sand on our faces and it was just perfect.

On the fourth and last day, we were back, to take in Utorda beach, another quiet, serene spot and then made our way to the last of the beaches on that road, Mobor. The silence, the cool breeze and the peaceful, lashing waves beckoned and we succumbed, walking more than two kilometres, as we stopped to gather shells. We could’ve gone on forever, without murmur.

But Betul was still haunting me. On Mobor beach, we asked a lifeguard its whereabouts. He said Betul was just beyond the hill we were seeing, closer to Canaguinim beach. Sighh! But there’s always next time.

We had unfinished business to take care of. A sunset awaited us, on a boat tour. We just had time for another beach, 16km south of Palolem beach — Galgibaga. The beach is also a turtle-nesting site and reminded me of Keri (Querim) Beach, with its medium shoreline and swaying trees. Another gem to add to the Goan beachmala.

We reached Palolem beach by 5.30pm, having just about an hour of light on our boat tour.  The boat tour held out the promise of dolphin sighting, a visit to Butterfly beach and cruising by Monkey Island and Honeymoon beach. The dolphins emerged as promised, some in pairs. While some like it hot, they like it cold and seemed to be pleased with the weather too. As we returned, we were rewarded with a priceless sunset.