At the United Nations Security Council, nurse Anjali Vijay Kulthe, a victim of the 26/11 terror attacks, narrated her ordeal, saying that she saved 20 pregnant women in the advanced stages of pregnancy and kept them safe for about three hours.

New York: At the United Nations Security Council, nurse Anjali Vijay Kulthe, a victim of the 26/11 terror attacks, narrated her ordeal, saying that she saved 20 pregnant women in the advanced stages of pregnancy and kept them safe for about three hours.

"I am the fortunate one who survived the 26/11 Mumbai terror attack. I bring to UNSC's notice the voice of trauma and sorrow endured by families of victims and survivors of terror attacks," said Kulthe, a nursing officer at Cama and Albless Hospital.

Anjali played a heroic role in saving the lives of several patients as the terror attacks perpetrated by Pakistani terrorists unfolded in Mumbai at the Cama and Albless Government Hospital.

"On November 26, 2008, I had the night shift in the antenatal care unit from 8 pm. 20 pregnant women were under my charge that night. An hour later we were informed that the city's main railway station around a mile away from the hospital had been stormed by terrorists. Our senior officials called and asked us to prepare for an emergency. While we began preparing, we heard gunshots being fired at around 10:30 pm from behind the hospital. My helpers and I quickly moved to the window of my wards. We noticed two persons with guns entering the hospital after jumping over the walls. One of them fired at our window, and we closely escaped the bullet which hit a helper's thumb," narrated Kulthe.

On the fatal day of November 26, she was on night duty in the antenatal ward at Cama and Albless hospital for Women and Children. While she was on duty, from the window she noticed hospital guards lying in a pool of blood. She immediately locked the doors of her ward and moved all the pregnant women into a small pantry space in the ward. She risked her own life to protect 20 pregnant women.

"I informed the Chief Medical Officer of the hospital that terrorists have entered our hospital and are firing. As I rushed to the first floor of the ward I saw the same two terrorists shooting the two security guards of the hospital. Both of them fell on the floor with their bodies heavily bleeding, I was extremely scared, but I gathered courage and rushed to the first floor. I closed the main iron door and shifted all the patients to the pantry with the help of another staff. I locked the door and switched off the lights so that the shooter could not see the patients. At all costs, I wanted to protect my patients," added Kulthe.

'Kasab had no remorse'

Speaking about Ajmal Kasab, the sole terrorist who was captured alive, and after a trial lasting almost four years and exhausting all legal remedies, he was hanged on November 21, 2012, she said, "Kasab smiled sarcastically, madam you recognised me", adding that Kasab had, 'no remorse, no shame'. Reminds victims of 26/11 wait for justice.

Many foreign delegates lauded Kulthe's efforts to save the victims of the terror attack. UAE minister at UNSC called nurse Anjali Vijay Kulthe, the victim of 26/11 terror's testimony as "moving." US Under Secretary of State for Political Affairs, Victoria Nuland also mentioned her, while British Minister of State for Foreign Affairs Lord Tariq Ahmad lauded Nurse Anjali Vijay Kulthe for her bravery during the 26/11 Mumbai terror attacks.

EAM Jaishankar addressed the UN Counter Terror meet. He said that Nurse Anjali Kulthe's testimony "is a stark reminder to the Council and the international community that justice is yet to be delivered to the victims of several terrorist incidents, including the 26/11 Mumbai attacks".

The UNSC meeting on counter-terror under Indian Presidency began with a minute in silence in memory of victims of terrorism. 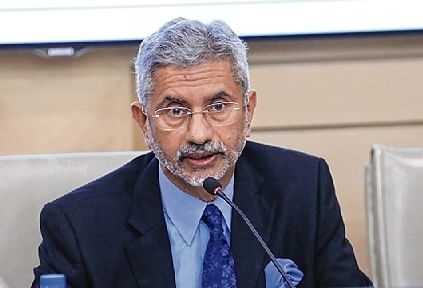