Harry Kane scored a 96th-minute equaliser to give Tottenham a point with a 2-2 draw away to Chelsea, before things exploded when both coaches were sent off for an incident after the final whistle.

Chelsea played excellent football and led though Kalidou Koulibaly's 19th-minute volley, only for Pierre-Emile Hojbjerg to level for Spurs with 22 minutes left. Reece James put Chelsea in front again in the 77th minute, but Kane saved a point for the visitors as he flicked home from a corner.

Chelsea complained about fouls before both of Tottenham's goals, and Thomas Tuchel's frustration appeared to spill over at the final whistle when he seemed to squeeze Spurs' coach Antonio Conte's hand extra hard in their post-game handshake and refuse to let go, promoting Conte to react angrily and for them both to be shown red cards.

England captain Kane was anonymous until burying a header from an added-time corner, to leave honours even in a tempestuous London derby at a sweltering Stamford Bridge, according to DPA/Xinhua.

Before the two managers were given marching orders after the final whistle by referee Anthony Taylor, they twice clashed heads, first on the touchline then on the field at the final whistle, in what proved an unwanted postscript to a high-quality and high-octane contest.

Conte confronted Tuchel in the aftermath of Hojbjerg's controversial equaliser as tensions and tempers spilled over. Chelsea were left incensed that referee Taylor waved away the Blues' appeals for a foul when Rodrigo Bentancur tackled Kai Havertz.

Tottenham powered upfield and scored from the same play, but crucially shortly conceded possession. Jorginho had the chance to clear, but was robbed in his own box and Hojbjerg angled home a neat leveller.

Blues boss Tuchel remonstrated with fourth official Peter Bankes as it became clear Hojbjerg's effort would stand. Former Chelsea manager Conte raced in and the pair briefly touched heads, and then both benches piled in to a messy melee.

Tuchel, his assistant Zsolt Low and Conte were all booked for their aggressions, but after all the fuss, the goal was awarded.

Chelsea set back to their task and James delivered a fine goal, only for Kane to pop up with his sole meaningful contribution of a tough afternoon. Tuchel and Conte shook hands walking in opposite directions at the final whistle, and when neither man refused to let go another clash ensued.

Taylor dismissed both men to add an ugly postscript on a relentless, engrossing contest. 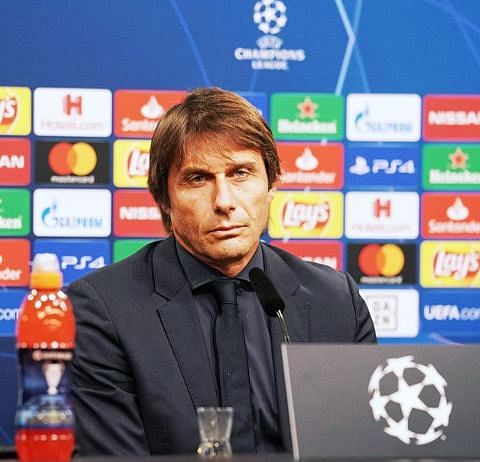