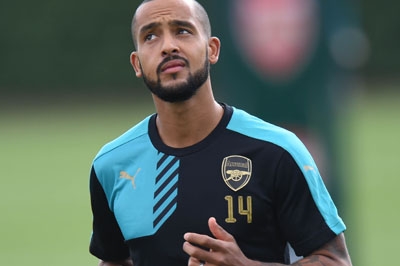 Winger feels Gunners can still save their Champions League campaign this season.

London : Theo Walcott insists Arsenal will salvage their Champions League campaign against Bayern Munich on Tuesday by emulating their ruthless demolition of Manchester United. Arsene Wenger s side are in severe danger of failing to reach the knockout stages for the first time in 16 years after two dismal defeats. The Gunners were beaten at Dinamo Zagreb and then suffered the embarrassment of losing at home to Olympiakos, leaving them pointless at the bottom of Group F. Another loss when Bayern visit the Emirates Stadium would put Arsenal on the verge of a stunning exit and, with so much on the line, the German champions imperious form this season makes facing them even more daunting opponents. Yet Arsenal go into the crunch clash in good form after winning 3-0 at Watford on Saturday.

England forward Walcott claims the north Londoners will have no reason to fear Bayern if they tear into them with the kind of high-tempo attacking style that led to a 3-0 rout of United. “We just need to move on from the first couple of (European) results, they have happened. We know we are capable of getting results against Bayern Munich and we obviously want to put things right. “Looking at our last home match against Manchester United, the intensity of our game was different to what it was like in the Champions League. We want put it right and we just need to work hard, and that is what it comes down to. “If everyone is doing their job on the day it is difficult to beat us. We know the talent is there. We haven t started in the Champions League how we would have liked to, but we will work hard and try to put it right.” Bayern have won on each of their last two visits to the Emirates knocking out the Gunners in the last 16 in 2013 and 2014 and it would be little surprise to see them inflict another damaging blow.