With six rounds still remaining, Anand is now joint fifth with Carlsen and three others at just passed the halfway stage. The Indian ace still needs some catching up to do but he looks in fine fettle.
PTI 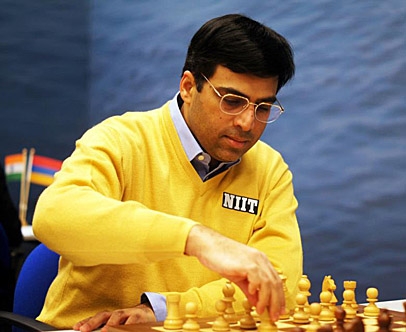 Viswanathan Anand pushed Magnus Carlsen to the wall before allowing the reigning world champion to walk away with a draw in the seventh round of Tata Steel Masters, here on Sunday.

It was a Sicilian Rossolimo and Carlsen admitted that he missed out a crucial sequence of moves while sacrificing a pawn in the middle game.

Anand, as white, had simply an extra pawn and this is where the tenacity of Carlsen came to fore.

The world champion had to work hard in a much worse position but it never quite got out of hand as the game progressed.

With six rounds still remaining, Anand is now joint fifth with Carlsen and three others at just passed the half way stage. The Indian ace still needs some catching up to do but he looks in fine fettle.

"The problem is mostly that I am playing awful chess! I would be ok with the draws if I was playing ok, but right now I'm mostly concerned about the fact that things are not working so well in my game," said Carlsen after the game.

Explaining about his form the Norwegian added, "At times today I tried to play quickly at some point, and it's a typical sign of bad form that once you play a couple of quick moves you've missed something crucial."

The Iranian sensation, 16-year old Alireza Firouzja has announced his arrival in the elite club and is amongst the youngest ever to do so.

Representing FIDE now and most likely to change his federation soon, Firouzja outplayed American Jeffery Xiong to regain the sole lead on 5 points out of a possible seven. The Berlin defense by Xiong led to a slightly worse position and Firouzja should that his technique is no worse when it comes to handling slight better positions.

Jorden van Foreest of Holland became the first player in the tournament to score a victory with black pieces as Nikita Vituigov found himself struggling right from the beginning . Foreest took his tally to 4.5 points to share the second spot with American duo of Fabiano Caruana and Wesley So.

In the challengers' section being held simultaneously, not much changed at the top as only Nihal Sarin scored a victory over Dinara Saduakassova of Kazakhstan.

Pavel Eljanov of Ukraine continued to be in pole position here on five points while India's Surya Shekhar Ganguly is joint second on 4.5 points.