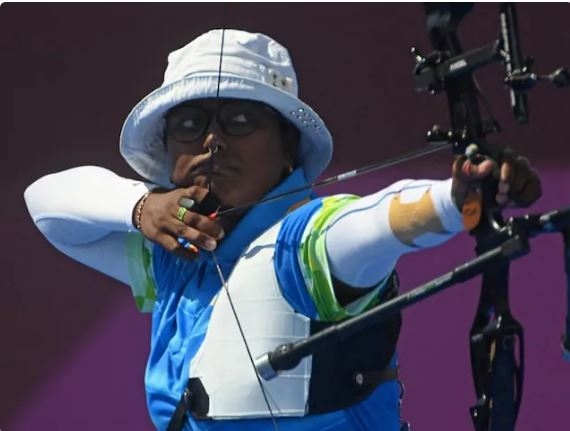 Tokyo: After rather a pathetic show by the Indian archers in the team events, the individual brilliance has come to the fore, as World number one Deepika Kumari, kept the Indian medal hopes alive by booking her place in the last 16. On the fifth day of the contest here on Wednesday, Kumari survived some anxious moments before getting past US teenager Jennifer Mucino-Fernandez 6-4 in the 75kg category.

However, it was not so with her men counter parts as Tarundeep Rai and Pravin Jadhav could not stay in the championship making their exit.

Deepika seemed to feel the pressure initially as she started off hitting the red-zone, capping a poor seven at the floodlit Yumenoshima Park.

Deepika lost the first set by one point but she bounced back strongly with three 10s in a row to take a 4-2 lead. She, however, failed to wrap up the match in the fourth set as she misfired a six in her second arrow.

The 18-year-old American made it 4-4, winning the set by one-point (25-24). In the winner-takes-all fifth set, Deepika had two 9s to start with before finishing with a poor 8.

Needing a 10 in her last arrow to force a shoot-off, Jennifer signed off with a nine to end her promising campaign.

Deepika's husband Atanu Das is the only other Indian left in the fray. The India No 1, who slipped to 35th place in the ranking, begins his campaign against Deng Yu-Cheng of Chinese Taipei in his opening round of 64 match on Thursday.

Earlier, Deepika sailed into the second round with a facile 6-0 win over lower-ranked Karma of Bhutan in her opening match.

World number 193 Karma, the flag bearer of Bhutan -- a country where archery is national sport -- during the opening ceremony, had poor scores of 23, 23 and 24 in the third set where she managed a 10.

The Indian also had a slow start, scoring 26 each in the first two sets, before she picked up with a 27 to seal her last-32 berth.

Olympic debutant Jadhav knocked out world number 2 Galsan Bazarzhapov in his opening match only to suffer a heavy defeat to world champion Brady Ellison in the second round. His senior Army colleague Tarundeep Rai also made second round exit.

Needing a tie in the fifth set to move into last-16, Rai faltered and Shanny won the set by two points, drilling in two 10s and a nine, as against the Indian's sequence of 9-8-9.

A perfect 10 kept eluded Rai and the world number 54 started the proceedings in the shoot-off with a 9, while Shanny sealed the issue with a 10.

6.15 am: P V Sindhu vs Mia Blichfeldt (Denmark) in Women's Singles Round of 16 Match

golf: 4.00am: Anirban Lahiri and Udayan Mane in Men's Individual Stroke Play Round 1

HOCKEY: 6.00 AM: India vs Argentina Men's Pool A match

ROWING: 5.20 am: Arjun Lal Jat and Arvind Singh in Men's Lightweight Double Sculls Final B (For rankings, not medal round)