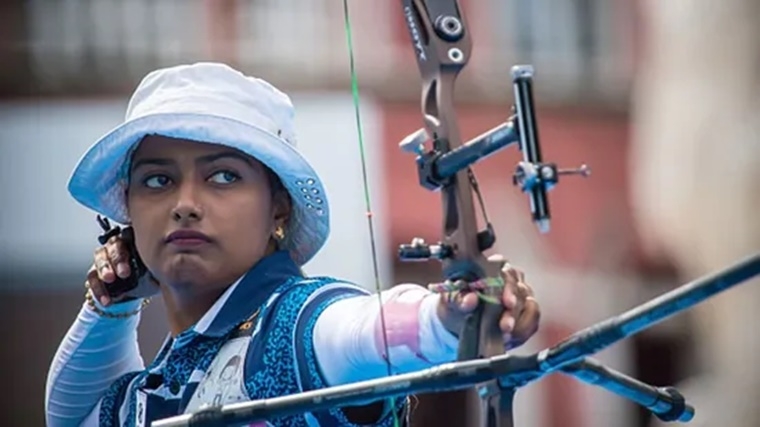 World number one archer Deepika Kumari beat former world champion Ksenia Perova of the Russian Olympic Committee in a thrilling shoot-off to advance to the women's individual quarterfinals of the Tokyo Olympics on Friday.

World number one defeated Ksenia by 6-5 in the 1/8 Eliminations round in the ongoing Tokyo 2020 Olympics.

Both archers had a good start in the match with a 9, but the Indian's second arrow was a perfect one. Perova who was then under pressure, landed a 7 resulting in Deepika gathering the two points by 28-25.

Ksenia Perova hit back in an absolute fashion as she clinched the next set. Deepika pegged one back in third and took the lead.

Fourth went tied with both archers shooting 26. With her back against the wall, the Russian responded well in the decider and took the match to the shoot-off.

Ksenia started the shoot-off with a poor 7 which Indian responded with a perfect 10 as she wrapped up the match.

With this win, Deepika will either face San An of South Korea or Japan's Ren Hayakawa in the quarterfinals.

For the three-time Olympian Deepika, this was her first win from three matches against the 2017 world champion as she became the first Indian to make the last-eight stage in an individual event of the archery competition in the Olympics.

Earlier on Thursday, Deepika's husband Atanu shocked South Korea's Jinhyek Oh in a nail-biting finish to make it to the 1/8 Elimination round in the men's individual archery.

Deepika defeated USA's Jennifer Mucino-Fernandez 6-4 in the 1/16 eliminations round on Wednesday to set up the match with Perova.