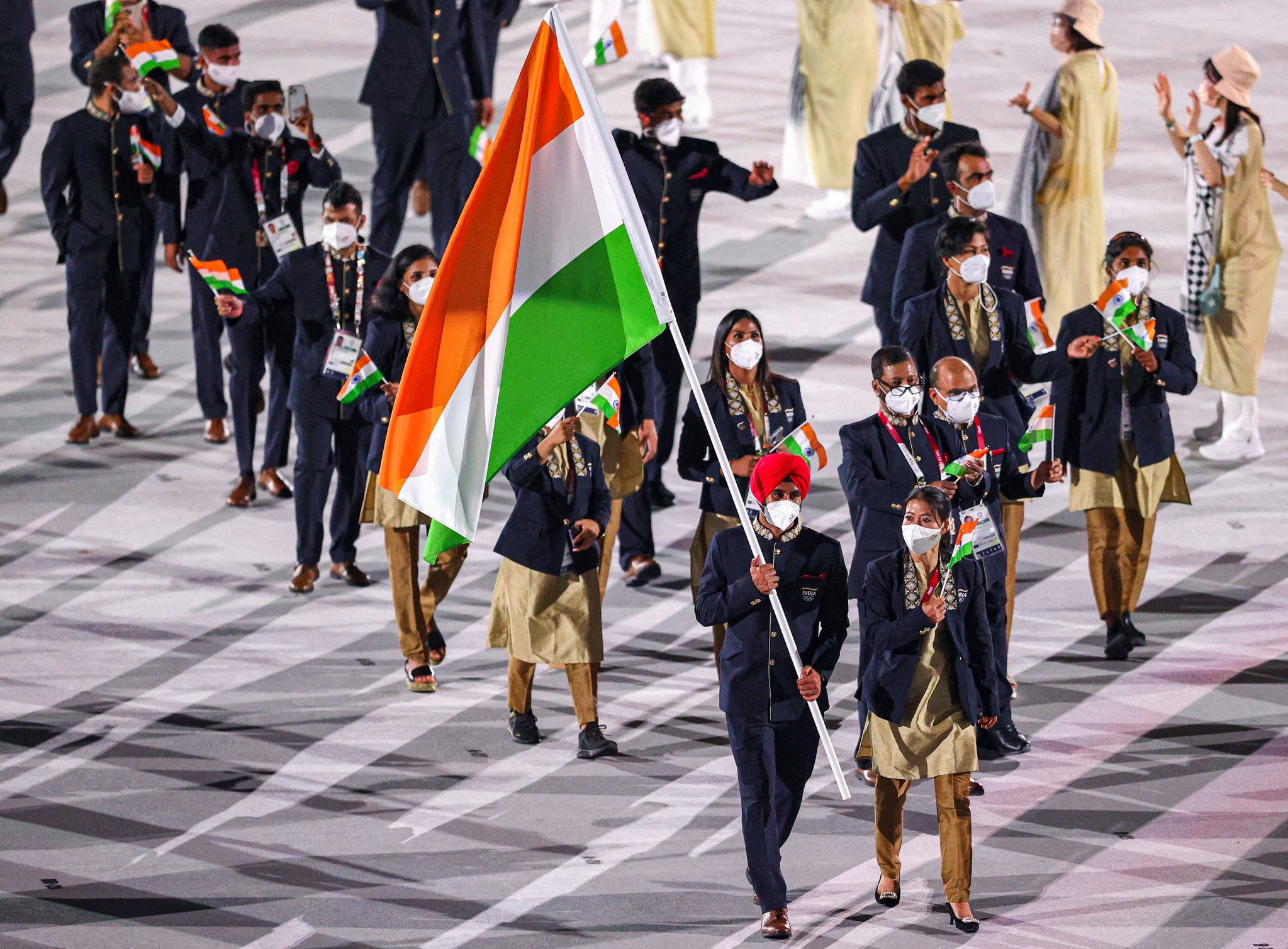 Tokyo: Flag bearers Boxer Mary Kom and Hockey player Manpreet Singh with other Indian athletes at the Oympic Stadium during the opening ceremony of the Summer Olympics 2020, in Tokyo, Friday, July 23, 2021. | (PTI Photo)

PM Modi’s young, dynamic and energetic sports ministers did their best to cheer the Indian contingent during the Tokyo opener, but they could not stop viewers questioning the choice of the golden-khaki attire worn by the women members.

As the Japanese announcer announced India’s march turn as 'INDO" at the parade of nations, the well-dressed Union Minister for Sports, Anurag Thakur, waved the tricolour with unforgettable enthusiasm and so did his deputy Nisith Pramanik. “Let me request most of the Indians to wake up early the next 16 days and watch the games and cheer Indian athletes. Let us not put pressure on them. Let us support and cheer them. I am sure they will give their best.’’

But the choice of designer clothes -- cigarette pants and tunic-style kurtas worn by the women members of the contingent surely raised eyebrows.

Namita Chowdhary, former member of Board of Governors of National Institute of Fashion Technology, Delhi, was unsparing in her criticism. “Whoever designed the attire or approved it for wearing it at the Olympics, is definitely starved of imagination.

“The dress was so dull and an absolute disgrace for a country like India that is so diverse, rich and vibrant in colours, patterns. It did not really portray the essence of our country. It looked like an RSS (Rashtriya Swayam Sewak Sangh) inspired pattern. “

Namita, who holds an Honours degree in Fashion Designing from Saint Martin’s, London, says, “They could have just stuck to sari for women. It is our national dress.’’

Likewise, veteran journalist Prabhjot Singh, who has covered six Olympic games from Barcelona in 1992 to Rio in 2016, said, “ The Indian contingent did not look impressive because the women were wearing some Western design garment instead of a Sari. Their appearance did not reflect the Indian heritage or ethos.’’