Buttler, a champion batter, has led his team to the summit clash in his maiden global meet as England skipper.

Melbourne: England's Jos Buttler would be a proud skipper if his men can win the T20 World Cup final against Pakistan on Sunday and inspire their footballing counterparts to pull off an encore in Doha next month.

Buttler, a champion batter, has led his team to the summit clash in his maiden global meet as England skipper.

Asked if the football team can take a leaf out of the cricket team, the soft spoken skipper said: "Yeah, I certainly hope so. Sport is such a huge part of English culture, and getting behind teams in World Cups is certainly something I know happens a lot in England.

"Even though we're on the other side of the world, you can certainly feel that support," Buttler said on eve of the final against Pakistan.

England are clubbed with Iran, Wales and USA in group B of the FIFA World Cup.

"The images you see of the Euros, obviously, nothing will compete with football in our country. Of course the game is going to be on free-to-air television, which is fantastic, will bring new eyes to the game," said the skipper-keeper.

Buttler doesn't feel people will be watching on the big screen at Trafalgar Square at 8 am British Standard Time but the TV sets will be switched on as there is a renewed interest in cricket after their 2019 World Cup win.

"We saw the benefit of that in 2019 with some of the images of people watching that game and Trafalgar Square being packed out and stuff.

"I am not sure they'll be getting up at 8:00 in the morning to get to Trafalgar Square, but I am sure there will be plenty back home wishing us well, as we do to the other teams that you mentioned who have got some big games ahead of themselves, as well."

Read Also
'We spoiled the party': Jos Buttler on England ending the dream of Ind vs Pak final 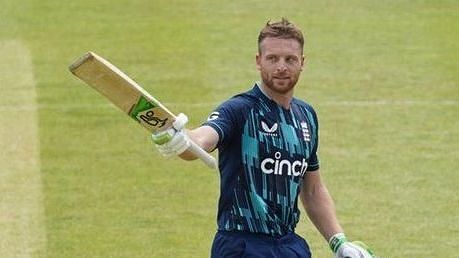