Arjun, son of Sachin Tendulkar scored a century on his Ranji Trophy debut against Rajasthan on Wednesday

Arjun Tendulkar, the son of legendary Indian cricketer Sachin Tendulkar, followed in the footsteps of his father to score a century on his Ranji Trophy debut against Rajasthan on Wednesday.

Almost 34 years back in 1988, it was Sachin who had smashed a century against Gujarat on his Ranji Trophy debut against Mumbai as a 15-year-old. In 2022, it is his son, who is also making his first-class debut, who reached the triple figures against Rajasthan.

Arjun sister Sara took to soclial media to react to her brothers feat.

In one of her Instagram stories, Sara wrote, "Proudestestest Sister Today." 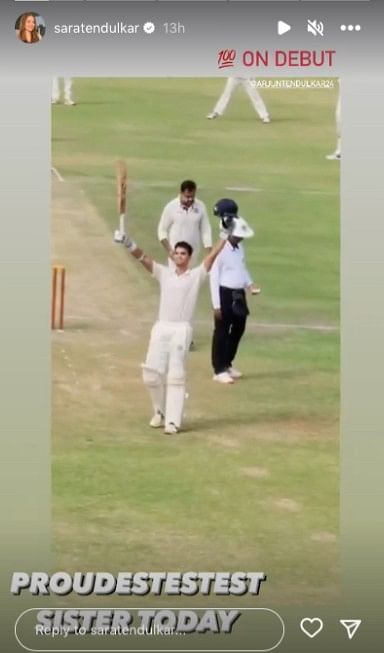 In another Instagram story she wrote, "And this is only the beginning." Arjun is primarily a fast bowler and moved to Goa from Mumbai at the start of the season for more opportunities to play. Before making this shift, he had represented Mumbai in only two T20 matches.

The all-rounder scored an unbeaten on 112

Arjun's stint with Goa started off with huge promise during the 2022 Syed Mushtaq Ali Trophy, in which he took 10 wickets in seven games at an economy rate of 5.69. He continued his good run in the Vijay Hazare Trophy as well, taking seven wickets in eight matches at an economy rate of 4.98. He finished as Goa's leading wicket-taker in the competition, as per ESPNCricinfo.

Arjun Tendulkar is also part of Mumbai Indians (MI) in the Indian Premier League (IPL) but has not made his debut for the team.