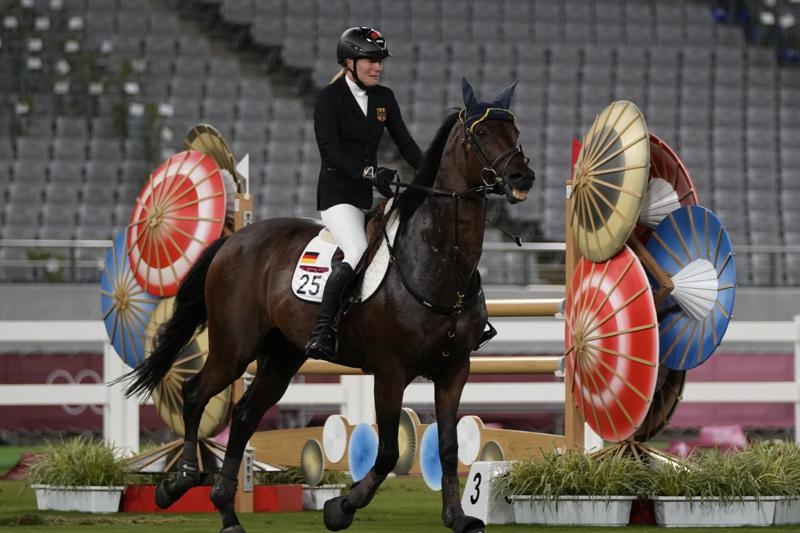 The horse showed little interest in jumping the fences and eventually refused to move forward at all. Schleu was in tears | Twitter

Tokyo: A horse which refused to jump dashed the hopes of gold medal contender Annika Schleu in the Olympic modern pentathlon on Friday.

Schleu was in the lead after two of the five events — swimming and fencing — when she encountered the horse Saint Boy in the showjumping event. One of the quirks of modern pentathlon is that riders are given randomly assigned horses for the event. Bonding with them quickly is supposed to be part of the challenge.

Saint Boy, however, showed little interest in jumping the fences and eventually refused to move forward at all. Schleu was in tears.

“I tried but he did not want to go. I just started crying,” Schleu said. “I did not expect to make him go and that was the reason I was crying ... I felt the horse lacked confidence. But I tried my best.”

Schleu was criticized for repeatedly using the whip in an attempt to get Saint Boy to tackle the course. The German Olympic committee called for modern pentathlon to change its approach “so that horse and rider are protected”, adding that: “The welfare of animals and fair competition conditions for the athletes must be the focus.”

The result left Schleu with zero points from the round and she eventually finished the modern pentathlon in 31st. In all, six of the 36 competitors failed to score in the showjumping including another who was allocated Saint Boy, Gulnaz Gubaydullina of Russia.

The former world champion was a medal contender after finishing first in the swimming.