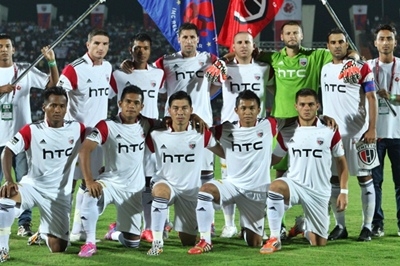 Guwahati: Representing one of the most football crazy regions in the country, North East United FC (NEFC) left their fans hearbroken last season when they finished last in the Indian Super League (ISL).

Led by Spanish World Cup winner Joan Capdevila, NEFC made a good start by defeating eventual runners-up Kerala Blasters FC in their opening match. But things went downhill for them after that and they ended up with just three wins from the 14 matches in the league stage. They had suffered a whopping five defeats and notched up six draws.

But having put the disappoinment of the inaugural season behind, the team — owned by Bollywood actor John Abraham — will hope to do better this year after several changes to their squad. Former Venezuela manager Cesar Farias has replaced previous incumbent Herbert. Farias, who has been at the helm of several top clubs in Venezuela, has had an illustrous managerial career. He is the first and only manager to have ever taken the Venezuelan national team to the semi-finals of the Copa America when they finished fourth in the 2011 edition of the prestigious tournament.

During his time at the helm, Venezuela also defeated Brazil for the first time in their history with a final score of 2-0 in 2008. Earlier, the 42-year-old had also helped Venezuela’s U-20 team to qualify for the FIFA U-20 World Cup for the first time. At NUFC, Farias will have plenty of quality to weave his magic with. The Guwahati based outfit has a formidable strike force with the additon of Ivory Coast international Boubacar Sanogo and former Senegal striker Diomansy Kamara and Nicolas Velez of Argentina. Although Spanish centre forward Koke, who was the highest scorer for the club alst year with four goal, has departed for Greek Super League outfit Veria, the arrival of the high profile trio means NUFC will not feel his absence.

Royal Wahingdoh forward Seityasen Singh has also been bought to strengthen things further. The 23-year-old Indian international was snapped up in the ISL player auctions for Rs 56 lakhs. The presence of Ghanian striker Francis Dadzie and Hlicharan Narzary of Dempo as back up mean that NUFC would not lack firepower in the forwardline in the second season. NUFC have also replaced last year’s marquee player Capdevila with former Barcelona winger Simao Sabrosa. With the 35-year-old former Portugal star on the left wing and the speedy Sanju Pradhan on the right, NUFC should be strong on the counter.

Talented India U-19 winger Alen Deory is also a good attacking option. With his raw pace and dribbling ability, the youngster can stretch rival defences if brought on as a second half substitute. Zambian midfielder Kondwani Mtonga is one of the few players retained by the club this season. The 31-year-old, who won the 2012 African Cup of Nations with the Zambian team, was impressive during the first season with his aerial ability and incisicive passing. tonga will have an able partner in central midfield in Boithang Haokip. The 24-year-old from Manipur can also be useful with his freekicks. Although Haokip mostly plays as a central midfielder, he can also play as a winger or side back.

The presence of former Sevilla player Bruno Herrero Arias and ex-Portuguese international Silas will strengthen the midfield further. In defence, former Portugal U-21 international Miguel Garcia is also one of last season’s players to be retained by the club. The 32-year-old, who made 13 appearances for NUFC in 2014, played for Sporting Clube de Goa in the ISL last season and has gained more experience of Indian conditions which will help during the second edition of the ISL . French central defender CÃ©dric Hengbart is also expected to be one of the pillars of the NUFC defence. Marlangki Suting and Raju Yumnam are among the most prominent Indian defenders in the squad.

NUFC embarked on a preseason tour of Durban, South Africa, and enjoyed a pretty decent outing, as they recorded two wins from three games.