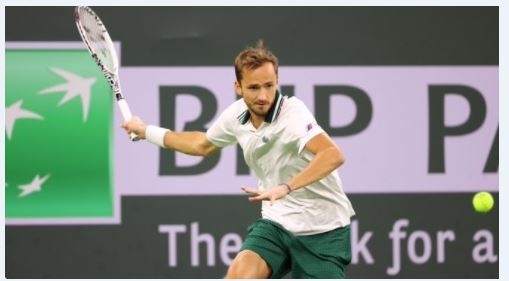 In a showdown that started late due to rain, the Russian managed the cold, windy conditions better at Indian Wells to set up a clash with 23rd seed Grigor Dimitrov of Bulgaria. It was the world No. 2’s 18th win from his past 19 matches on North American soil.

The Russian won 70 per cent of first-serve points and hit 28 winners to just 16 unforced errors for his 50th match win this season. Krajinovic finished the 90-minute contest with 15 winners and 20 unforced errors.

“I feel like I’m trying to play a little bit less... just playing the biggest tournaments, or the ones that will get me back into shape so I’m really happy that I managed to get 50 (wins). It means that I was doing pretty good in a lot of them,” said Medvedev who became the first player outside the Big Four to reach the top two on the ATP rankings since 2005.

“Filip is a really tough opponent. He’s always playing top tennis, very tough matches, especially that second set. (There were a) lot of ups and downs, but I think a great level from both of us. Really happy that in the tie-break I managed to (gain) the edge on my side,” Medvedev told the tennis website atptour.com.

Krajinovic had always been a tough opponent for Medvedev. Two years ago, as a No. 113-ranked qualifier, he defeated the then-15th seed in straight sets to reach the fourth round at Indian Wells.

This year, in the third round of the Australian Open, Medvedev let a two-set lead slip before he stormed home in the fifth to win his 17th straight match. It was his first five-set victory in seven attempts.

The talented but unpredictable Grigor Dimitrov’s strong form continued as he overcame the wind and 6’ 11” Reilly Opelka’s serve, overcoming the American 6-3, 6-4 to advance to the fourth round in Indian Wells.

Dimitrov stood two or three feet closer to the baseline on return as he countered the height and angle of the Opelka serve, breaking twice to advance after 74 minutes.

Angelique Kerber overcame a strong challenge from Russia Daria Kasatkina 6-2, 1-6, 6-4, to reach the fourth round. Two one-sided sets for each player gave way to a tense decider. The pair traded breaks twice across the first four games, before Kerber -- the three-time major winner -- earned the decisive break at 3-3.

“We’ve played so many matches...it was a bit of a rollercoaster match for me. I was just trying to stay mentally strong and to play point by point,” Kerber said.