Pakistan's shocking one-run defeat against Zimbabwe at the T20 World Cup sent murmurs around the world as former Pakistan pacer Shoaib Akhtar lashed out at Babar Azam and Co, saying he had feared such a thing would happen.

Notably, the former Pakistan pacer had earlier predicted that Pakistan may be knocked out in the first round itself.

Pakistan's over-reliance on their opening batting pair came back to haunt them as Zimbabwe pipped them in a low-scoring thriller by one run to clinch their first Super-12 win of the ongoing T20 World Cup on Thursday at the Perth Stadium.

Pakistan made a mess of a paltry chase as they suffered a batting collapse and left their bowlers to chase and win the match for them. All-rounder Sikandar Raza took three wickets in a short span to dismantle the chase.

"That's embarrassing, to be most polite!" he had tweeted first.

Thats embarrassing, to be most polite!

He then followed it with his match analysis and said that nothing can be done on its own, one needs to put in effort, he tweeted in Hindi.

The former Pakistan pacer tweeted a video with the caption, "Average mindset, Average results. That's the reality, face it." The former pacer also called out the choice of players for the tournament and stressed on the difficulty that the team may face in qualifying for the semi-finals.

In a video, he said, "Very very embarrassing. Keep on selecting average players and team management. This is the outcome. I am super disappointed. I mean losing against Zimbabwe? Now you are not even going to qualify with ease."

Coming to the match, chasing the target, Pakistan were off to a slow start after openers Babar Azam and Mohammad Rizwan were watchful of the new ball and scored just three runs from the first two overs. Richard Ngarava and Blessing Muzarabani bowled the first and the second, respectively, and stuck to tight lines with both bowlers extracting bounce from the surface.

Babar and Rizwan struck a boundary each in Ngarava's second over to get the inning going but the Pakistani captain was dismissed by Brad Evans in the fourth over, sending him back for a paltry score of 4 (9).

Rizwan too followed suit as he was sent back by Muzarabani for 14(16), exposing the middle order of the Pakistani team.

Pakistan ended the powerplay at 28/2 with the top scorers from the previous match, Iftikhar Ahmed and Shan Masood at the crease.

However, the partnership did not last long as Luke Jongwe removed Iftikhar in the eighth over to deepen problems for the Pakistan team further.

Masood kept the scoreboard ticking and took his team to 54/3 at the end of the 10 overs, striking some picturesque shots during his stay.

The batting duo of Masood and Shadab Khan looked set to take the team across the line but a twist in the tale began after the introduction of spinner Sikandar Raza in the 14th over.

Raza dismissed Shadab and Haider Ali in two consecutive deliveries to turn the match around for his team, giving them a shot at victory.

The set batter, Masood was the third victim of Raza's off-spin in the 16th over as the Zimbabwe players now believed they had a genuine chance at victory. This wicket saw tailender Wasim Jr join Mohammad Nawaz for the run-chase.

The pacers then bowled with their tails up as they could sense victory within grasp. Ngarava then bowled a three-run 16th over to tighten their screws on the Pakistani team.

Needing 29 from the last three overs, the batters swung and miss under pressure. Nawaz tried his best to make his team get across the line and hit a six in the 19th over to reduce the equation to 11 from the last overs.

Brad Evans conceded a boundary on the second ball of the over and it looked like Pakistan would bag the match but Evans bowled superbly to dismiss Nawaz on the fifth ball, and then held his nerve to defend three off the last ball to help Zimbabwe beat Pakistan by one run in a nail-biting encounter.

Earlier, Pakistani bowlers unleashed hell upon the batting lineup of Zimbabwe to trigger a batting collapse, restricting them to just 130/8.

Pakistan's decision to play an extra pacer in Mohammad Wasim Jr worked wonders for the team as the youngster ended with his best T20I bowling figures (4/24) to restrict Zimbabwe to a below-par total. Sean Williams and Brad Evans helped the team cross the 100-run mark.

Sikandar Raza was declared the 'Player of the Match' for his brilliant bowling performance. 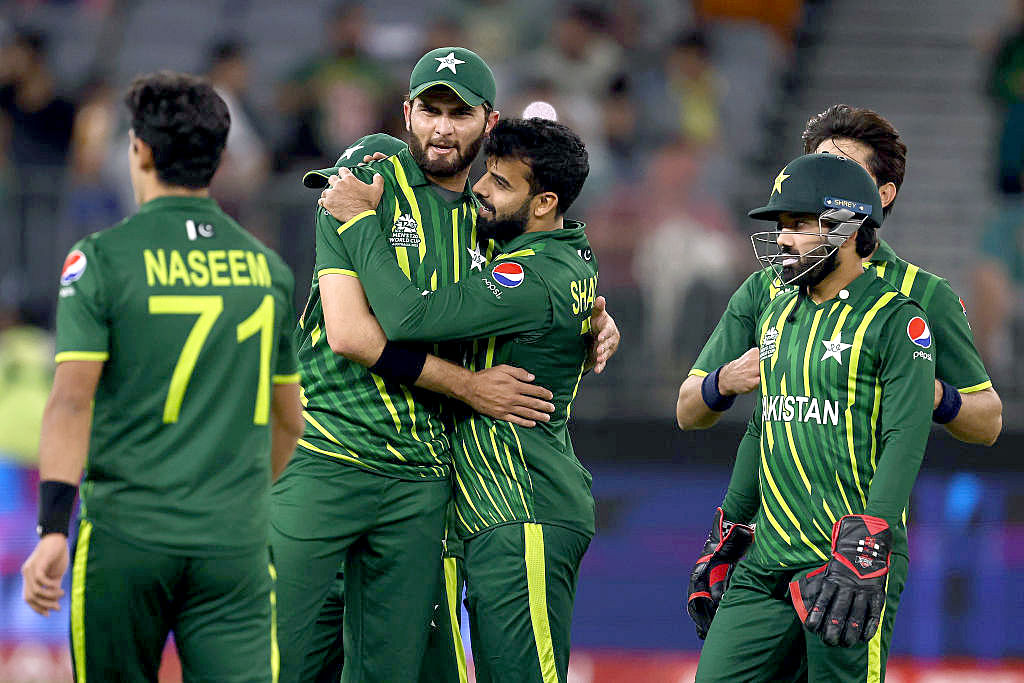