Its all in the family; From uncle Sanjeev Rajput to sister Khushi, shooting runs in teen world champ Naamya's household 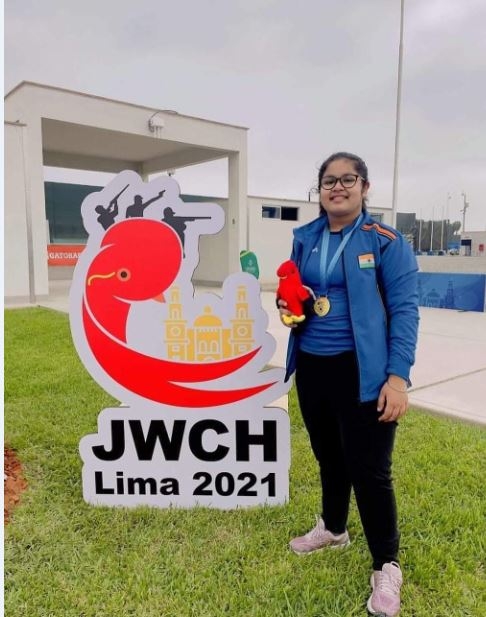 New Delhi: It runs in the family for 14-year-old Indian shooting sensation Naamya Kapoor, who surprised almost everyone, except for her near and dear ones, by winning gold in the junior world championships in Peru.

If the presence of her three-time Olympian uncle Sanjeev Rajput is not enough, the latest teen star of Indian shooting has elder sister Khushi, who is now knocking on the doors of national selection, to look up to for inspiration.

Move outside the house and she is taken care of by her highly dedicated coach, Ankit Sharma, who trains kids as young as nine at his academy in Faridabad.

At 14, Naamya became the youngest Indian shooter to win a medal in a top international tournament when she claimed gold in the women's 25m pistol competition at the ISSF Junior World Championship in Lima on Monday.

The Kapoor family is elated but not very surprised with their youngest daughter's stunning feat.

"We have hopes from Naamya and Khushi as both are very hard working and talented in shooting," said Gunjan, Naamya's mother.

When the bespectacled Naamya was around 11-12, she found a mentor/coach in a 24-year-old Ankit, who had just retired as an active shooter to pursue coaching, his area of interest.

Gunjan attributed the growth and success of both her daughters to Ankit.

"He has played the most important role in their development as shooters. He deserves every bit of credit for Naamya's gold medal in the world championship, considering the manner in which he worked," she added.

On his part, Ankit was modest about it and said Naamya possessed great potential to become a shooter of note, something that Rajput echoed.

"Naamya, as well as Khushi, have the talent and are great prospects for the country. Not just in shooting, they are also bright in academics," Rajput said.

"While they have their coach working with them, I try to help them whenever we happen to meet during family gatherings. Mostly, I try to encourage them and help with ammunition, weapons, kits, I mean from where to get all these."

Rajput is one of the country's most experienced active shooters at the moment and his tips can surely make a difference.

He added, "I agree world champions or Olympic champions are not born, but made. But still, we are there to hone their skills, motivate them as much as possible. Rest is their job, so the credit is also hers."

Ankit has been guiding Naamya and her 17-year-old sister for the past two years at his Aim Shooting Academy in Faridabad, where the aspirants can only train for the 10m air pistol event.

Ankit is hoping to get a range for his kids to train in other events too.

"My range only has the 10m facility. As for 25m we go to Dr. Karni Singh but that is mostly occupied as there is either a camp or trial going on. So my kids hardly get any time to practice.

"Now if we are allotted a place for 25m pistol, it will benefit the shooters greatly and they will definitely shine for the country in future," Ankit, who took to coaching after a young shooter had once approached him for help, said.

He has been coaching for the past three and half years.

Naamya shot 36 in the finals to claim the top prize ahead of France's Camille Jedrzejewski (33) and 19-year-old Olympian Manu Bhaker (31), who has already won three gold in the tournament.