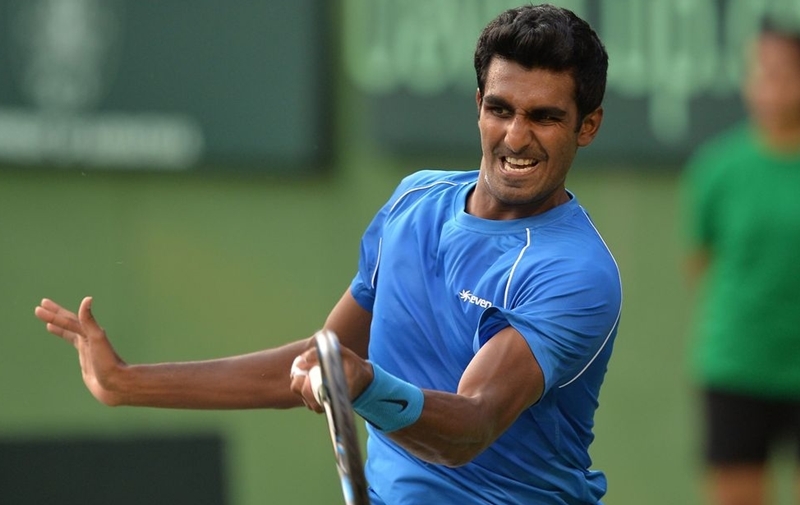 Kolkata: The gamble of playing on grass did not work out for hosts India, at least on the opening day, as Italy lived up to their reputation to win both the singles in the Davis Cup Qualifiers at the Calcutta South Club here Friday.

Andreas Seppi experienced some early hiccups before getting past Ramkumar Ramanathan 6-4 6-2 in the opening rubber, while 22-year-old Matteo Berrettini made a winning Davis Cup debut, cruising past India number one Prajnesh Gunneswaran 6-4 6-3.

With 0-2 down, India’s doubles pairing of Rohan Bopanna and Divij Sharan finds itself in a must-win situation on Saturday. For Italy, top-ranked singles player Marco Cecchinato was paired with Simone Bolelli, the 2015 Australian Open winner in the doubles.

“Focus is on tomorrow. We know we have a job at hand. It will be a lot harder. No time to give up now,” non-playing captain Mahesh Bhupathi told reporters after the opening day’s struggles.

India had bounced back from a similar situation to win in China 3-2 in Asia/Oceania Group I rubber last year and Bhupathi drew inspiration from that turnaround.

“They are so much more experienced. If you take your chances you get rewarded. We understand the pressure of playing for the country. Strange things happen. It has happened in China. I know Italians are stronger than China but we will take one match at a time,” a confident Bhupathi said.

Italy opted to go with Berrettini ahead of top-ranked and world number 19 Marco Cecchinato and the youngster, who made the second round of Wimbledon last year, did not disappoint and broke Prajnesh’s serve in the first set.

Berrettini, who had beaten Prajnesh in the Chengdu ATP last year, raced to 15-40 with two big forehands before converting his break point. As the set wore on, Prajnesh looked more settled took as his serves started getting better. Both players held their serves until the Italian sealed the issue in the 10th game without a dropping a point.

Berrettini began the second set exactly the way he started the first, breaking Prajnesh to take a 1-0 lead. He started off with a sublime volley at the net and Prajnesh had no chance as the Italian dished out a couple of superb groundstrokes to make the job tougher for the Indian.

The crowd did their best supporting Prajnesh but the nerves soon started playing for the Indian who remained in the game by holding his serve until the seventh game. Berrettini effortlessly made it 5-3, racing through his service games before breaking Prajnesh again in the ninth game.

After two early errors, Prajnesh clawed his way back to make it 30-all but the Italian capitalised on another error to secure a match point. Prajnesh hit a forehand right into the middle of the net to concede Berrettini the match and Italy a huge 2-0 advantage.

“I was dreaming about this as a child. I was really happy and focused on the match. I’m really enjoying the moment and I’m glad it went my way,” said Berrettini.

Earlier, Andreas Seppi overcame early jitters to beat Ramkumar Ramanathan in straight sets, giving Italy a 1-0 lead. The World number 37 was slow off the blocks but hit top gear in the second set to complete a 6-4 6-2 win in one hour and 11 minutes.

The big-serving Indian fired eight aces but his weak returns meant that he failed to convert two break points in the first set before the Italian won five points in a row to wrap the opening set in 41 minutes. In front of a motley crowd shouting ‘Ram, Ram’, it was a neck and neck battle till the eighth game with both holding their serves.

Ramkumar, who is ranked 133, failed to convert two break points in the second and eighth game. The match was tantalisingly poised in the next game before the Italian broke it with a cross-court backhand. He went on to win four games in a row to seal the first set. The second set turned out to be a formality for the Italian as he shifted gears in the third game to give Italy a 1-0 lead in the tie.